Hong Kong artist Annie Wan is known for her conceptual approach to ceramics and moulding. Her exhibition Zan Baak Fo, part of the Jockey Club New Arts Power programme, and an extension of her 11th Gwangju Biennale presentation Everyday a Rainbow (2016), took place across two Hong Kong locations: a grocery store in Ping Shek Estate, Choi Hung and an old art gallery in Sheung Wan. In Choi Hung Wan displayed the ceramics alongside real supermarket items, while in Sheung Wan they were on clean shelves in a white-walled gallery. The two contrasting venues played with the idea of the value of art, with pieces sold in both locations at the price of the original moulded item. The title of the exhibition comes from the Cantonese phoneme zan, which can mean both precious and authentic.

Wan’s work has been acquired by private collectors and institutions including the Hong Kong Heritage Museum, Hong Kong Museum of Art, the Burger Collection and the UK’s University of Salford Art Collection. She has had residencies in countries including Japan, Denmark and the US, places that have all had an impact on her work.

Katherine Volk: How has this exhibition evolved from your work at the Gwangju Biennale? Annie Wan: They’re both connected to consumer goods but at the Gwangju Biennale I focused more on consumerism through rainbow colours, using them in the cliched manner that the commercial world uses advertising and packaging. I tried to arrange all of the commodities in rainbow order, and it turned out very beautiful in appearance; even I was attracted to it. I guess this is why the commercial world uses these colours: because customers like it.

This time, I tried to question the value of art works and commodities, so I chose not to use the rainbow colours again. I put ceramic objects into real shops, as I did in Gwangju, but that time they were scattered around five shops, with a small number of objects in each. This time I tried to have more communication with the shop owner, who is quite a funny man: he told me that many people approached the shop and asked if they could buy the ceramic objects. I think this is quite a funny outcome of arranging commodities and ceramic objects together.

The Sheung Wan location is like a showroom, and was previously a gallery, so I could show all of the items there as well as sell them. Every item was sold at the price of the original objects that I used as mould templates, such as a can of Coke: each one is just $6 or $7. So this is a provocative action, questioning of the value of art works and commodities. Also, it’s very affordable, so I hope some people who usually don’t buy art works now have the chance to buy at least one or two of them.

KV: Did you choose the lighting for the Sheung Wan exhibition? AW: It’s my own taste; it is quite clean and minimal, and I will make the glaze on the objects very pale, in contrast to the rainbow colours. If I created only white objects, they would seem like pure art pieces, but I wanted them to be seen as ceramics, so that’s why I put the blue-tinted glaze on them. All of them were made in Jingdezhen, China, a ceramics town famous for making celadon objects.

KV: How you choose which objects you make into ceramics? In the past, you used items that have a human touch to them such as a worn book or a scuffed shoe, but recently you’ve focused on supermarket items that are waiting for their moment, such as an unopened Coke can or Yakult bottle. AW: I first practised using natural things, such as vegetables and fruit, but this is not the first time I’ve moulded commercial products. I did so before as a memory of an artist residency: in Japan I started to mould cans from the supermarket because we had to cook our own food, so we spent a lot of time shopping there. I try to imagine how to transform the packaging and all of the details into ceramic objects. I want to keep the details in the ceramics, each texture or fold, but moulding these specific features is also a monument of time, to remember the story of the objects.

In 2006 I also did something similar in [supermarket chain] Citysuper: I put ceramic objects beneath real objects and I also arranged the real commodities into a rainbow on the shelves.

In the commercial world products all have labels and they all have an identity. When you see a bottle, you can recognise that it’s a Watsons Water bottle. I take the content away, but the form is ingrained into our daily life and it remains familiar. I had this experience in Denmark: I moulded different Danish fish cans, but through just the objects’ pure forms, Danes could still recognise which kind of fish was in a certain can.

KV: What are your thoughts on replicating objects from our daily lives that are mass-produced, compared to organic objects in all their irregularity? AW: For natural objects, I can never mould better than the original. That’s why I seldom mould organic things: a flower is already very beautiful by itself. But for products and the transformation of those products into ceramic objects, they may lose their internal content but somehow the pure form will remain. If art works have an aura, I use this process to take objects from our daily life and transform them into art works. 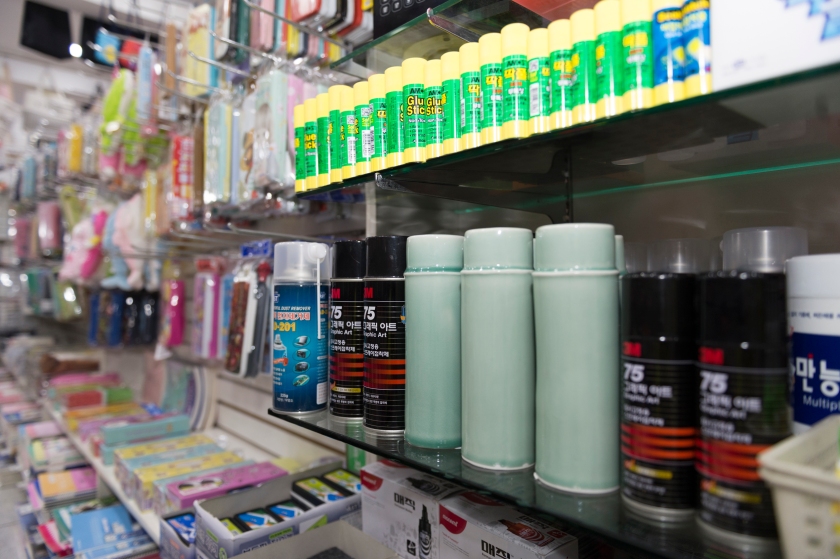 KV: In this exhibition you’re replicating, but in your previous work you were preserving or fossilising, for example with a book in The Road We Travelled (2015) at Gallery Exit. Was there a conscious shift? AW: I think it all comes from my thoughts on the moulding process, which have directed my research since graduate school. I found that I wanted to extend the meaning of moulding as not just a technique or mechanical process, but in a conceptual direction. I think the fossilisation of objects is more like a technique or process. Books are a very special item, because it’s not just the pure form that’s significant. We don’t buy a book because of the form; the content within is really abstract and intellectual.

KV: Do these objects go beyond cultural boundaries or are they supposed to be based within a culture that would recognise them? AW: I’ve found the way I make art works distracts from or takes away the cultural significance. I borrow the meaning and I borrow the cultural significance. Because you can recognise the objects, I try to abstract them. Sometimes it is just the soul or ghost of the objects. Usually I eliminate the layers of the meaning but maintain the pure meaning of the object.

KV: Are you planning to continue with your exploration of this subject? AW: I don’t know really; it depends on the circumstances. With the Gwangju Biennale and Jockey Club New Arts Power, I have resources and support. These two works are large scale, and without this support I don’t think I could have done them. My next project will be for the Echigo-Tsumari Art Triennale in Japan. It will also be a community project because that art fair is involved with the neighborhood and the public, so I’m trying to go that way. I don’t make my work purposely a community project, but if the concept needs it to be a community project then I do it.

This site uses Akismet to reduce spam. Learn how your comment data is processed.