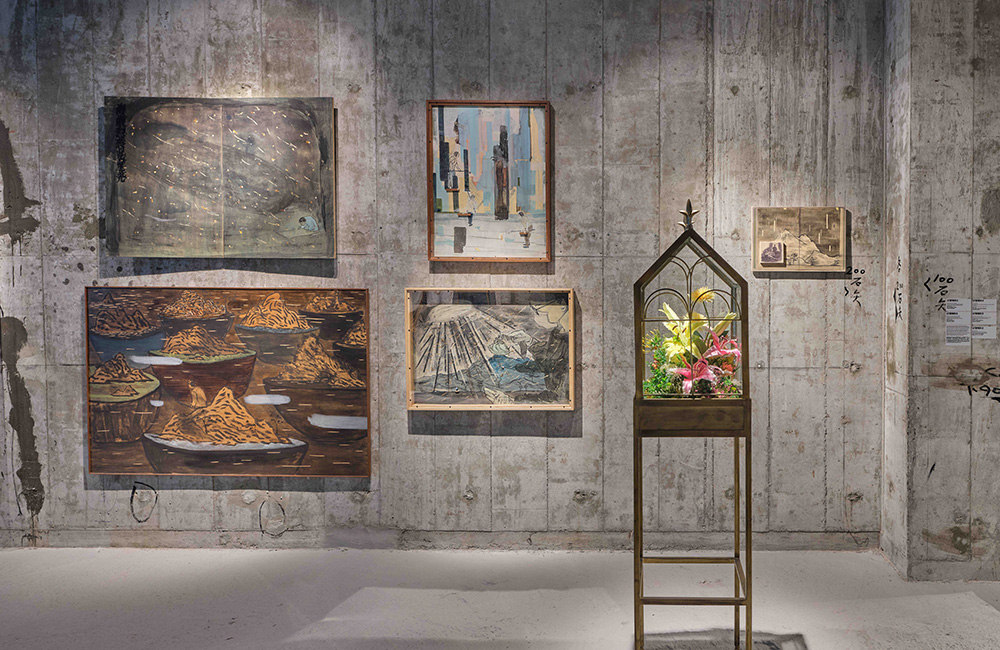 Around the world, many public gardens, especially those normally maintained to symmetrical and groomed perfection, have been left untended during citywide lockdowns or movement control orders. In Paris, a friend walked by the Jardin de la Nouvelle-France, peered inside, and called it a “little jungle”. This wildness without wilderness is the consequence of eight weeks of precautionary restrictions. When people cannot visit parks and gardens, their upkeep is similarly affected.

While human activity in public ground to a near halt in many major cities, nature reclaimed its place in our constructed environs. Wild boar roamed down paved roads in Berlin. Dolphins frolicked in sections of the Bosphorus normally busy with tankers and cargo ships. Monkeys climbed up to my sister’s fourth-floor apartment in Singapore and tried to break in.

Taking its title from the name of a neoclassical garden in Kathmandu built in 1920, Garden of Six Seasons was a wide-reaching exhibition that also functioned as a precursor to the Kathmandu Triennale scheduled to open in early December and run for more than a month in the Nepali capital. The show was curated by Cosmin Costinaş, director of Hong Kong’s Para Site and the artistic director of this year’s iteration of the triennale in Nepal. It included works by more than 40 artists that highlighted pressing concerns from around the world when it opened, including the Covid-19 pandemic.

At Para Site, the main site of the show, a human body in John Pule’s oil painting Prototype – Site of Old Myths (1995) maps out the village where the Niuean artist was born, Liku, on the eastern edge of the island nation. The figure’s head represents the site where a church now stands, containing a frame in which a man kneels in an open field, Christian cross behind him, his penis erect; Pule was educated at a Mormon school and attended services every Saturday and Sunday when he was growing up. On the figure’s chest, right over his heart, is a motif representing the birthplace of Pule’s mother. Below that is where the artist was born. The figure’s legs lead down to the ocean. Pule draws on the informational energy of hiapo – bark cloth – to pack the rest of the canvas. There is an intimate biography here, paired with the resuscitation of a storytelling tradition that has faded in part because of colonisation, a combination that was present in other works in the show too.

In the same gallery, watercolours by Izmail Efimov also referenced age-old traditions, but propelled them in a different direction in contemporary settings. Originally trained as a socialist realist painter, Efimov eventually became one of the most original artists in the ethnofuturism movement, which came into accidental existence when a group of young artists and writers were spitballing in Tartu, Estonia in the late 1980s, during the Soviet Union’s twilight years. Facing an existential crisis, Estonia’s young intellectuals sought to redefine their forms of expression in literature, poetry and art – in turn forging the beginnings of a new identity for a sovereign nation emerging from the Kremlin’s rule.

Among Efimov’s works in Garden of Six Seasons, titles like Swamp Divinity (1993) and Ruler of the Mountain Tops (1996) recall ancient folklore shaped by centuries or millennia of oral history, while yonic shapes pack the totemic Attributes of the Finno-Ugric Everyday (2004).

Ethnofuturists like Efimov wanted to join “the archaic, prehistorical, ethnic substance” unique to their nation with a “contemporary vision of the world”. The scholars and creators who were part of the movement tried to build a new head space for their people, one that connected their traditions with the future.

Traces of Efimov’s ethnofuturist tendencies were found downstairs in another artist’s work, mounted in Para Site’s ground-floor space. Janakpur-based Komal Purbe’s A woman flying a rocket (2019), an acrylic painting on lokta paper, shows exactly what its title describes. Drawing from Mithila art-making traditions that were passed down through generations by women in what is now southern Nepal and northern India, Purbe depicts jagged red combustion blasts trailing from three nozzles, her rocket decorated with rich geometrical patterns as well as fish and tortoise motifs. Like Niue’s Pule, Purbe taps a traditional practice that has been partially lost, especially at a time when globalised, massively disseminated visuals often supplant local image-making practices. Both artists keep their forebears’ art forms alive, adapting techniques and sensibilities honed over many generations to reflect the ideas, dreams and reflections of people who are looking at their art now.

Purbe is a member of the Janakpur Women’s Development Center (JWDC), which was founded in 1991 to open the possibility of using art as a source of sustainable income for the local Maithil women, as opposed to the meagre pay that was offered to art workers who churned out multiple copies of the same picture. Works by other painters who are part of JWDC were included in the exhibition too, over at Soho House, the show’s second site, including the self-taught Madhumala Mandal’s painting of a woman controlling an excavator, and Rebati Mandal’s depiction of a woman steering a combine harvester through a rice paddy. Both works are less fantastical than Purbe’s imaginative marine-astronautical imagery, yet still deviate from age-old representations of religious scenes or nature, preserving Mithila visual heritage while expressing aspirations for a fair social order in what is still a severely patriarchal and casteist society.

Also in Soho House, Lu Pan and Wang Bo make sense of the history and consequences of 19th-century European colonialism in East Asia in their two-channel video Miasma, Plants, Export Paintings (2017). The pair map out the connections between the British East India Company’s presence in Canton, now Guangzhou, its inspector of tea John Reeves’ encounter with Chinese draughtsmen and his botanical transplants to London’s Kew Gardens. These are linked with the British occupation of Hong Kong, the 1894 plague in the city, the belief in miasma before germs were discovered, and the western circulation of Chinese paintings and documentary photographs taken in Hong Kong. Segments from the 1955 film Love is a Many-Splendored Thing are cut into the video frequently, in which one of the leading roles, a Eurasian doctor named Han Suyin, is played by a Caucasian actress. Running at 28 minutes, Lu and Wang’s video unpacks many topics. It flicks at the appropriation of botany to realise colonial ambitions, documentary photography as a channel to propagate racial prejudice, and how cultural frictions persist even in what seem like harmless forms of soft power.

In another chamber, Dominique Gonzalez-Foerster offered a quiet video recorded at Praça Paris, a neighbourhood in Rio de Janeiro where the garden landscape is a copy of the symmetrical, formal layouts found in French gardens – a stylistic transplant rather than a literal one. Her five-minute video Gloria (2008) shows us stationary scenes of shrubbery and fountains, growing and thriving in natural, wild ways in the savanna climate, breaking out of the strict aesthetic boundaries defined by European tastes. Here, humanity’s imposition of order over nature is overturned. In 2020 this has become a new reality in some parts of the world, like the public parks and gardens of Paris.

Contemporary art’s cultivation, propagation and evolution depend on globalisation. Pule’s renewed interpretation of hiapo in part leans on an international audience, which circles back to bring about a new generation of practitioners, keeping the art form and heritage alive. The same applies to the paintings by the artists of the Janakpur Women’s Development Center. Their Mithila paintings are sold to buyers who are often overseas; the organisation’s website specifically emphasises that they ship their products all around the world. As for the actual Garden of Six Seasons in Kathmandu, the site was restored with the assistance of the Austrian government in the 2000s after lying in neglect for nearly four decades. Global capital, shipping lanes and cultural exchanges can keep alive ancient traditions and invigorate faded forms of heritage, but it depends on practitioners like those in the exhibition to keep them tethered to their original essence.

Garden of Six Seasons reached into many cultures and encapsulated a broad range of research, interpretations and myths from various corners of human civilisation and from across ages. There was a complex Navajo textile by Mae Clark, Batsa Gopal Vaidya’s symbols lifted from ayurvedic healing practices, Wing Po So’s repurposed traditional Chinese medicinal ingredients, and linen amulet vests from the Philippines, Burma and northern Thailand. In turn, the show offered alternative readings of globalised, flattened systems that we have all come to take as constant no matter where we land. In that spirit, the Kathmandu Triennale will be held later this year, in 2077 – according to the Nepali Bikram Sambat calendar.