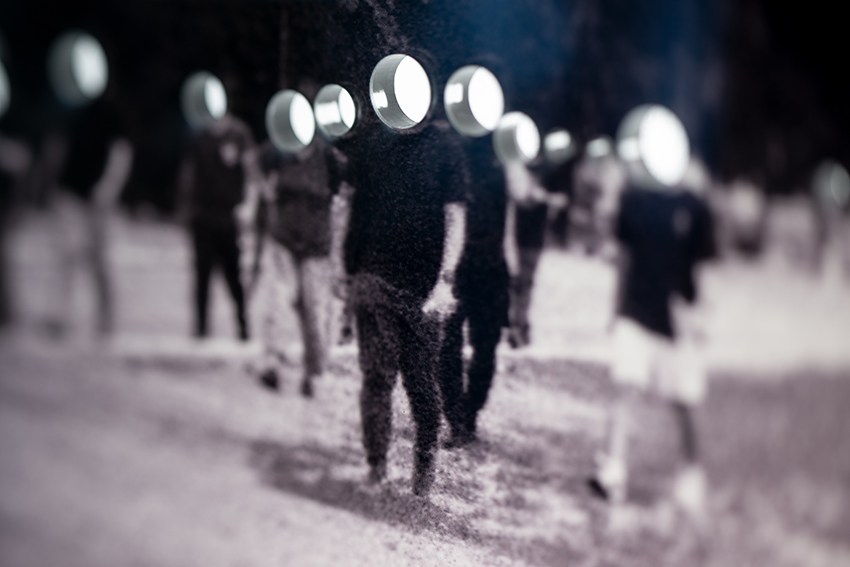 During the final day of Siu Wai Hang’s exhibition Unreasonable Behaviour at the Goethe Institute in Hong Kong, the city was undergoing its latest shock: the public radio and television channel, RTHK, was busy deleting from both its own archives and its YouTube channel old shows that might no longer find favour with the authorities.

Cancelling and erasing has become one of the most common signs in the city – from the thick layers of white and grey paint covering up the slogans that were written on the walls and streets in 2019 to the many universities hitting the delete button on talks, conferences and symposiums that had been recorded but are now best forgotten. Social media contacts suddenly disappear, or their whole content is cancelled, in an attempt not to fall foul of the rapidly changing political climate.

How very poignant, then, is this small series of striking works by Siu, which elaborate on the events of 2019, transforming them from straightforward photographic testimony to a devastating gallery of mutilated images. Even the introduction to the exhibition is barely readable, as the letters have been nearly obscured under numerous brushes of white paint.

One of the works that can be seen – the title cannot be read as it has been barred by a large line of black ink, with only the description visible, reading “18 Photographs & Wire Brush, 2019” – consists of 18 large sheets of photographic paper at different stages of erasure of the initial image. The first photo was taken on August 18, 2019, when a mass protest took place under heavy rain. In the image we see Harcourt Road, filled to capacity from one end to the other with people carrying umbrellas, under dark clouds, and squashed in by tall commercial buildings. Then, one picture after the other, Siu has used a metal brush to gradually eliminate the whole image, until the last photograph, which is completely without pigments and made rough by the metallic bristles, and even has some see-through areas, where the paper has been consumed by the brush. That moment, in which hundreds of thousands of Hong Kong citizens decided to brave the heavy summer rains in order to express their displeasure with the government, becomes nothing, just photographic paper weakened by erasure.

Other photos in the exhibition have been mutilated in a less furious fashion, but they still carry the marks of what has to be cancelled. Photos of the protests are carefully punctured so as to eliminate all the faces of the demonstrators: in some instances, the line of holes that cannibalises the faces of the participants is so tight that the picture is nearly cut in half. On a table in the middle of the exhibition space is a large book, called CLEAN HONG KONG ACTION, that can be opened and closed like a concertina – but carefully, as it contains only punctured photos. With what looks like a desperate, nearly maniac precision, Siu has punched a hole over every head in tens of photographs, leaving a surreal landscape of familiar streets and angles, populated by a presence that can no longer be acknowledged. And yet, in the three photographs that have been enlarged and printed on Plexiglas, or in the book itself, the holes become unexpected sources of light, leaving the viewer to wonder for a second if these are indeed punctures or small torches illuminating once more the erased memories. In his description of the show, Siu says that Hong Kong has entered “a state of absurdity” – and as what had been witnessed by all becomes unmentionable, condemned and denied, the state of absurdity is palpable, and painful.