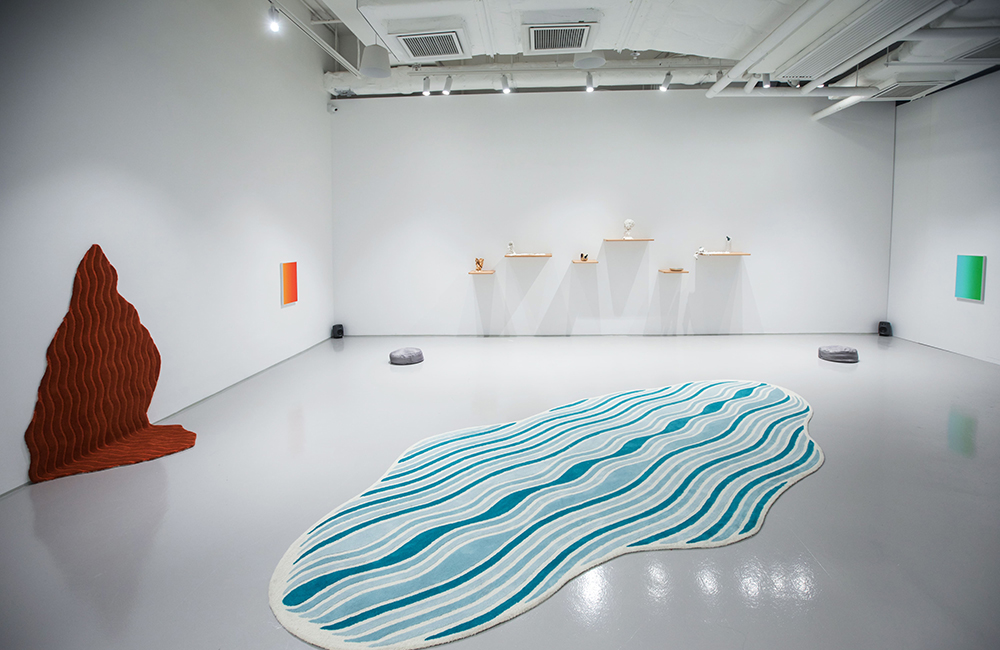 Protests and pandemics have relegated us to the domestic sphere, where we’ve been forced to confront the anxiety and fear induced by the past year’s events. In addition to political, economic and social disruptions of unprecedented proportions, we’re experiencing emotional and psychological upheavals specifically reactive to this point in time.

Articulating and reflecting on this complex state of being, Hong Kong artists Shane Aspegren, Nadim Abbas, Tap Chan and Wu Jiaru have come together to stage Household Gods, an exhibition curated by Ying Kwok, on view at Hart Hall in H Queens. Lifted from writer and occultist Aleister Crowley’s early 20th-century play Household Gods, the title of the show explicitly outlines its objective: to question our relationship with the supernatural through our “most intimate setting”, the home.

The four artists conceived of the exhibition while working alongside each other at Hart Haus’ sprawling 10,000 sq ft Hart Social Studio in November 2019, before the advent of Covid-19. Despite their seemingly disparate practices, the artists find common ground in using domestic objects, exploring how they serve as channels to activate the unknown or uncanny.

Kwok describes this collaboration as one that distinguishes the exhibition from others, as “the subject was not given to the artists as it usually is, but directly emerged from their mutual interests”. In their own distinct ways, they strive to harness this abstract feeling, one that particularly resonates in the current climate of uncertainty.

“The content has to carry emotion,” says Kwok. “We’re trying to explore or understand the supernatural – something we don’t have an answer to. The best way to do that is through emotion. It’s about the psychological status and evoking a feeling we carry. Oftentimes a divine, supernatural being or power provides guidance when we can’t understand something. The spiritual realm is unexplored and represents a big unknown; there’s an abstract quality to it that we want to explore.”

Abbas’s drive to address this theme stems from trying to “capture something that is slippery and elusive”, and perhaps even non-existent, as “belief is creating significance out of nothing”, says the artist, broaching the topic of faith and the sacred. It’s fitting that the first piece viewers encounter is Abbas’s Homeless Forms for Formless Homes (2020), a striking installation resembling a totemic shrine, encasing goods stockpiled against the apocalypse, such as spam and toilet paper, which is also evocative of the South Korean blockbuster Parasite.

Apocalyptic scenes and dystopian realms from sci-fi and horror films have long fuelled Abbas’s conceptual practice. In 2014, in partnership with Absolut Vodka during Art Basel, the artist created Apocalypse Postponed (2014), an immersive, multisensory installation in a bar, like a post-apocalyptic bunker, through a collaboration in which Aspergen also took part. Continuing the theme of apocalyptic preparation, in the current exhibition Abbas invokes the notion of the supernatural directly through ordinary household objects.

“It brings to mind when something as ordinary as a piece of furniture, like a chair, is no longer just that, but is charged with something electric,” he says. “It changes your perspective on that object.”

Inspired by modular furniture, specifically Ikea’s DIY variety, Abbas constructed the two structures from plywood, scouring pads, dish sponges and cardboard. Using repetition and symmetry as formal techniques to assemble them, he reinforces a totemic visual quality while simultaneously referencing the practice of both domestic and spiritual rituals.

Domestic rituals are integral to Chan’s Threshold Field (2020), a “domestic altar” made from melted polyurethane, on the surface of which she created two round depressions, containing blue and purple mouthwash.

“I’m thinking of daily cleansing rituals,” she explains, “particularly those we perform now and are obsessed with during Covid-19.”

Her choice of material invokes a sense of ambiguity, the melting texture denoting an ephemerality and a dreamlike aesthetic, which Chan attributes to her ongoing inquisition into perception and the dynamic between reality and fiction.

“It’s wax-like,” she says of the material. “It gives it a sense of impermanence, like a candle. It forms this skeletal aesthetic; it’s very unfinished and not fully functional, as if it were something encountered in a dream or a virtual game.”

Fascinated with the liminal space between the real and unreal, Chan weaves this blurry aesthetic into the rug on which the “skeletal shelf” stands. Made from common packaging string, from afar the rug appears to be deceptively fuzzy in texture. The liminality is enhanced in Twofold Consciousness (2020), consisting of two white headboards that appear to be deceptively lit by neon halos, hovering on the walls.

Aspegren incorporates reflective, spiritually linked rituals in his work. With his self-styled “abstract” meditative sound piece We may believe the words are not what we may believe (I) (2020), the artist continues his ongoing exploration of the healing properties of sonic frequencies.

A series of small sculptures akin to decorative ceramics accompany his sound installation. Hand-dripped white plaster shrouds deity-like figurines, bestowing them with a mystical quality – literal household gods. The ceramics, while crafted by Aspegren, also consist of found organic material such as coral and rocks. Each one grows out of the other, peeking through dripping plaster, combined by the artist in what he calls a “spontaneous ritual”.

“I like to have a sense of improvisation in my work,” says Aspegren. “I like to make things without thinking about them. I work on these slowly for months, sometimes five at the same time. Even when I’m making them, they’re transforming. They start off as one thing and become something else; they’re transient in that sense, ephemeral.”

Highly improvisational, Wu’s creative process is physically embodied in her paintings, a medium which allows the artist the “fastest expressive release”. Yielding bursts of colour and a fervent energy, door_god I & ii (2020) convey a softer take on the traditionally masculine protective door gods, statues which mark the entrances of many institutions and homes in Hong Kong. The painting depicts two pink-hued nude men “guarding” the entrance of the exhibition.

Proceeding further into the domestic space, Wu additionally created sculptural collages, beige_objects (2020), from items she uses on an everyday basis, essentially documenting her daily home rituals. Old phone cases, mascara, lipstick, shoes and old toys from McDonald’s happy meals are clustered together with spray foam. Over this she has sprayed a reflective silver, cementing the sculpture in a grey hue, visually evoking a futuristic, dystopian aesthetic. “I made these objects into a sculpture for future use,” she says. “They’ll be relics for future archaeologists.”

When photographed with a flash, the surfaces of the pieces become incredibly shiny, glittering under concentrated light. While this could be perceived as a gimmick, it underlines the artist’s intent to present the possibility of a multitude of perspectives. For Wu, this becomes symbolic of the ambiguity of human memory, and indicative of the fact that nothing is ever what it appears to be or how we remember it.

“Lights compose everything, and when you shine a light on something it either blurs the details or reveals what is actually there. It questions what is real and what isn’t; it’s like how memories work for humans,” says Wu.

She further contemplates the uncertainties and possibilities of the future by situating humans in the role of creator.

“I’m interested in how we were created and in our relationship with our creator – or God. It’ll be the same in the future with AI; they might have their own thinking about us, as we created them. I want to create data for the future that will help understand this time.”

At this critical juncture, wrought with conflict and tension, we have inevitably turned towards introspection, both spatially and spiritually. The works in the exhibition serve as powerful extensions of each of the artists’ individual practices, exploring their unique takes on the relationship between humans and the supernatural by engaging with domestic objects. Household Gods is a welcome point of reflection, addressing and rethinking ways of perception and living in this moment.