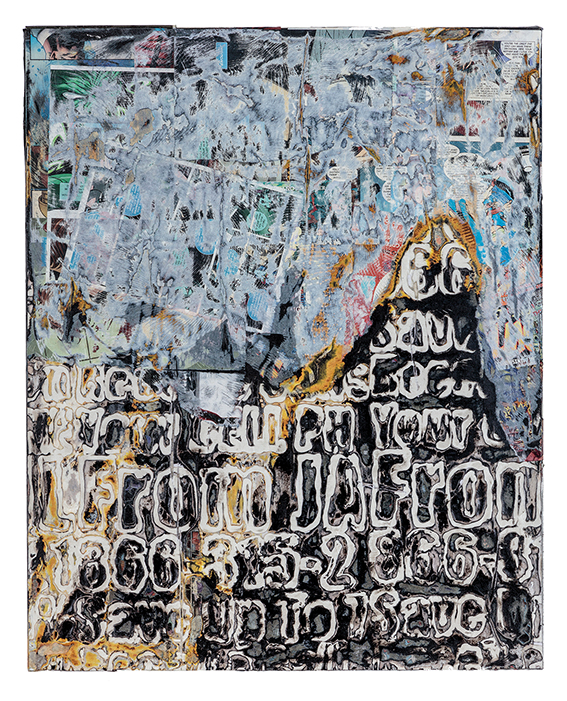 Spanning the 15th and 16th floors of H Queen’s, the newly built luxury art and cultural hub, Hauser & Wirth’s brand new Hong Kong space was inaugurated by an exhibition by US artist Mark Bradford. The US representative at the 2017 Venice Biennale, the Los Angeles-based abstract artist brought to the Hong Kong show some of his newest works, which feature a map motif.

At first glance, the viewer is greeted with a scene of overwhelming tranquility, surrounded by turquoise-blue paintings against the stark white walls of the spacious gallery. The bright blue colour of the majority of the paintings evokes the feeling of being immersed in a vast ocean. However, on closer examination, the images provoke anxiety; they do not depict nature and freedom, but aerial views of a claustrophobic, restrictive urban reality. It is as if the viewer assumes the perspective of an overhead surveillance camera that sees where all the boundaries and borders of urban geographies lie, and these separations divide populations into communities according to their race and class. The grungy texture and layering of the paintings recall graffiti and torn posters on walls. The paintings encapsulate the everyday experiences of the city dweller.

In the context of Hong Kong, where land is scarce and a hotly sought-after commodity, power struggles between communities and landlords often erupt as boundaries blur, especially as the urban fabric keeps changing when reclamation of land causes borders to expand into the sea.

The question of identity arises as communities are disrupted by rapid development, often for financial gain, resulting in social injustice. Bradford’s paintings remind us to pay attention once again to how marginalised communities, often voiceless and powerless, are oppressed during the process of city planning. Often the seemingly objective lines on maps are simply facades that do not reveal the reality of the lives of the people who live there.

Bradford’s paintings are not meant to show peaceful shades of blue on a sunny day, but are rather a collective plea for people with power and authority to delve deeper, beyond cold, structural, institutional violence, and think about what is at stake for vulnerable populations.