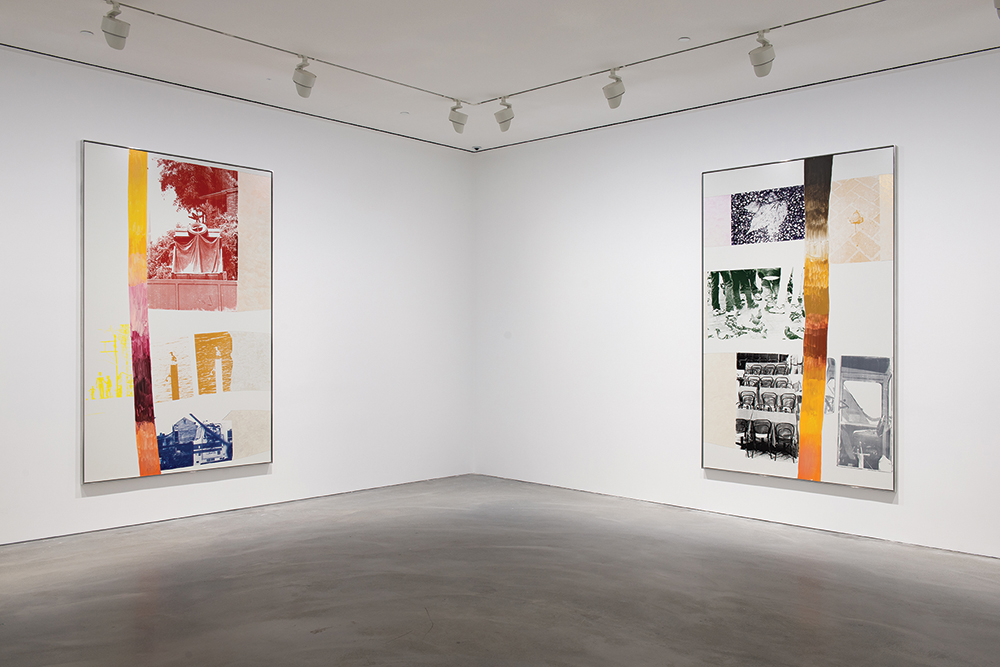 The “enfant terrible of the New York school”, as poet Frank O’Hara dubbed Robert Rauschenberg, reshaped 20th-century American art and left behind a boundary-breaking body of work characterised by experimentation and unorthodox use of different media. His early works, made in the 1950s and 60s, featured composites of found objects – bottles, a taxidermy goat head, newspapers, chairs, rubber tyres, photographs – and painting; Rauschenberg referred to them as “combines”. The Vydocks series, created in 1995, are essentially a two-dimensional continuation of the composites of found objects for which the artist was known. The lastseries in which Rauschenberg incorporated silk-screening before shifting into digital processing, the works are a
rendezvous of diverse media, a synthesis of painting, photography and drawing.

Pace Gallery Hong Kong features eight out of 13 identically sized white sheets of bonded aluminium works – the remainder are still held by the Rauschenberg foundation – sized to human scale so the panels are the height and width of a person’s reach, and the viewer can figuratively get into the paintings. The verticality of the panels forces the eye to travel up and down the entirety of the visually dense, cleverly playful surface, which is printed with a collection of monochrome photographs, paired with irregular rectangles of colour floating against the white background. These tactile, textured rectangles of hand-painted and at times luminous colour contrast with the smooth, machine-made surface of the aluminium, creating a relationship between materiality and light, and a play between the monochrome printed image and the blocks of colour. In Holdings (1995), the peach colour of a printed photo of a wall is echoed in the rectangle beside it, like a shadow.

Cutting vertically down the composition of each work, dividing each panel into two asymmetric halves, is a coloured band in a different chromatic spectrum, painted in loose, fluid strokes. They bring the works to life, giving the impression of prisms of light, or light flare across the lens of a camera. And they pull all the elements together into a whole, creating a dialogue between abstraction and representation, painting and photography, with neither dominating as the eye shifts up and down, back and forth across the surface. The monochrome photographs, a selection of up to five per panel silk-screened on either side of the coloured band, are collaged together like fragments of memories from the artist’s life, fitted into the composition like pieces of a puzzle. Originally taken by the artist, they capture moments from travel and the everyday – pigeons, details of buildings, a fallen leaf, a wall, a footpath – printed and preserved forever on the surface.

Tide features a red silk-screened flower in the upper right-hand corner, a nod to the artist’s first travels in China in 1982 and subsequent exhibition there in 1985, the first time a western artist had a formal show in the country. Rauschenberg also paired positive and negative prints of the same image, as in Easel, where ochre-coloured images of a seagull on a post are placed beside one another; and in Guest, featuring the sepia-toned images of a mirror and a phone. This repetition of images seems to allude to memory, or different versions of memories, and their gradual deterioration over time.

Initially exhibited in 1995, when Rauschenberg was 70, the works in Vydocks still have a fresh quality to them. The artist, who often turned to alcohol as his intoxicant of choice, was sober during the creation of these works, and it’s perhaps evident in these spare compositions, marked by clarity, serenity and equilibrium. If anything, Vydocks is about time passing – an effort at remembering, reassembling and making sense of one’s life.