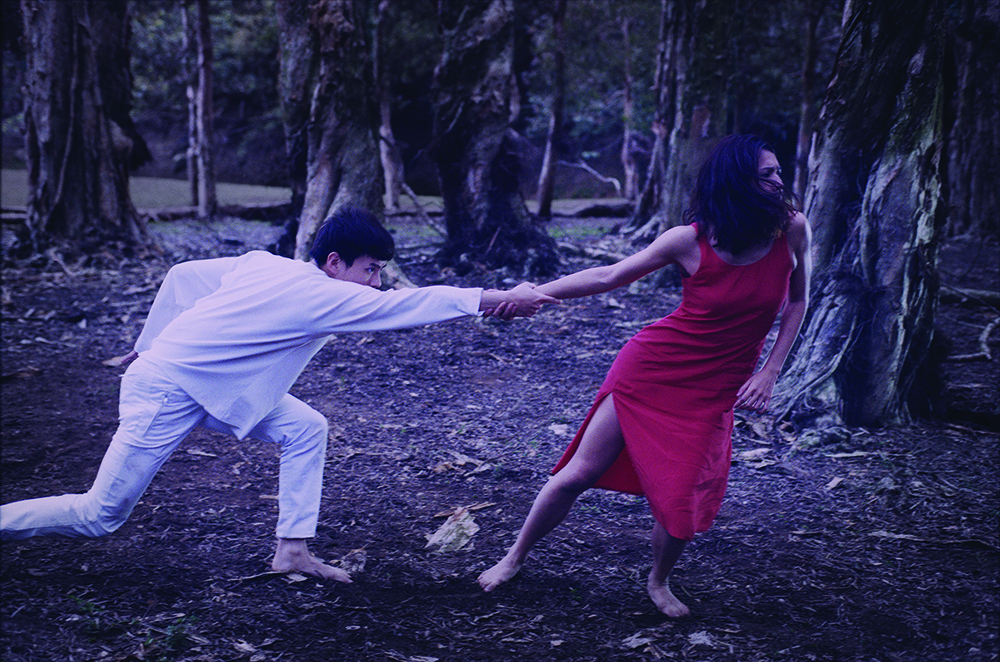 As Simon O’Sullivan says in Myth-Science and the Fictioning of Reality, the power and function of contemporary art have always been in summoning forth the thing that has “yet-to-come”. In an era of post-truth and alternative facts, when it appears increasingly difficult to sift through deluge of materials on social media and arrive at the truth, and when reality has become stranger than fiction, where does that leave contemporary art?

Two recent Hong Kong shows, Constructing Mythologies at Edouard Malingue Gallery and The Other Story at Karin Weber Gallery, might provide some clues. At first glance, the two shows seem to take different approaches – curated by Caroline Ha Thuc, Constructing Mythologies tells of the myths, be it from folklore or constructed by official authorities, that penetrate Southeast Asia, while Ying Kwok’s The Other Story asks that we ignore the fictitious aspect of art for a moment to focus on the process of art-making. But both shows bring to the fore the importance of fictioning, the idea of venturing beyond oneself into the unknown.

Upon entering Constructing Mythologies, viewers encounter two walls dressed in flimsy yellow squares. A caption reveals them to be Truong Cong Tung’s Traces of overthrow, conceived from plastic fertiliser bags. On the squares are written such phrases as “12 universe month = 26,000 years”, coaxing us to reconsider our preconceived notions about time, most of which are derived from the Gregorian calendar. Between these two walls lies the artist’s From the primitive to the civilised, a freakish mess of rocks, gooey-looking beehive, wood, green camo-print shirt and antenna that tells a tale of the intrusion of man upon nature but also represents a visceral collapse of different spatial and temporal worlds, opening up a space for viewers to consider the surrounding world in a new light.

Fictioning is also manifested in Khvay Samnang’s Preah Kunlong, in which elephant mask-donning beings are seen dancing and posing against a luxuriant natural background. It’s a tribute to the Cambodian Chong community, an ethnic minority known for its animist beliefs. Samnang’s art is derived from experience, from the myriad of encounters one’s body has with its natural surroundings.

This is echoed in Jessey Tsang Tsui-shan’s Breathe In/Breathe Out at Karin Weber Gallery, where two figures, a man and a woman, are seen dancing in a lush forest, with the man then chasing the woman and the woman pulling away. At one point, the camera zooms into the man, who is gently stroking and kissing a tree. It’s a love story, not just a between man and a woman, but also with their surroundings.

Vietnamese artist Phan Thao Nguyen, a protege of the American video and performance-art pioneer Joan Jonas, questions how facts and what is taken as the truth are constructed in Tropical Siesta, a two-channel installation that ruminates on the romanticisation of French Jesuit Alexandre de Rhodes’ History of the Kingdom of Tonkin. In the 14-minute video, a group of Vietnamese school children reenact different scenes inspired by novels: the Crime and Punishment snippet sees the children walk among rice paddies, narrow waterways in green fields, with a wooden ladder meant to symbolise a shackle fastened over their heads; while the Tale of the Water Goddess sees a girl, decked in thin yellow garb, half submerged in a swamp, eyes staring emptily at the sky, pointing to the disconnect between de Rhodes’ narrative and the reality of Vietnamese life for these children.

Towards the end, the same group of children pelt a classmate supposedly dressed up as the French Jesuit with white chalk, a copy of the History of the Kingdom of Tonkin in his hand. A defiant response to de Rhodes’ romanticisation of Vietnamese history, it’s a moment of triumph, but it’s also clear that children remain fascinated by such embellished accounts of their own history. Rather than outright rejection of de Rhodes’ account, the film focuses on the inevitability of how the history of a country is always shaped by myriad of forces, and how the protection of one narrative doesn’t necessarily mean the destruction of another.

The idea of multi-layered history is also seen in a series of paintings that variously depict a kitchen, a foggy scene, an escalator and a conference room. At the centre of these paintings is a ladder that appears not to be part of the scene, as if it is from another dimension or point in time. Nguyen’s paintings look layered, as if one layer has been scrubbed off before another layer was added, resulting in a light, eerie effect reminiscent of Greek palimpsests.

The privileging of erasing the line between myth and reality goes hand in hand with the privileging of heterogeneity over monotony. In Phan’s paintings, seemingly unrelated elements are interwoven, competing with and infiltrating each other. At the same time as the upper layer is deconstructing previous layers, it is also excavating traces of it, with the final painting becoming a coalescence of the old and new.

The idea of the palimpsest also underlies Tsang Chui Mei’s bright lashes of paint in The Other Story. Whereas Nguyen’s paintings are light, Tsang’s Blazing, Stabbing, and Roaring series is colourful and exuberant. Lashes of paint are piled atop one another, glass shards in a snowflake motif cutting through dreamy landscapes: a rupture in the conscious mind.

I Am Fine, I Am Good, I Am Happy by Chloe Cheuk, Printer, paper, plexiglass, metal, motor, size variable, 2018. Courtesy the artist and Karin Weber Gallery.

Resistance to such ruptures punctuates ’s I Am Fine, I Am Good, I Am Happy. Hanging in mid-air, a printer ejects a long scroll of paper bearing the phrases “I am fine, I am good, I am happy” – a critique of contemporary society’s obsession with happiness. Meanwhile, the looming absence of an “I” haunts the artist’s Restless Reflection, in which a swivel mirror is neatly placed on a dresser. A swivel mirror is normally used for make-up rituals, but in this case it’s been programmed to swivel endlessly, preventing viewers from catching even a glimpse of themselves. Their very existence becomes caught in the liminal space between myth and fact.