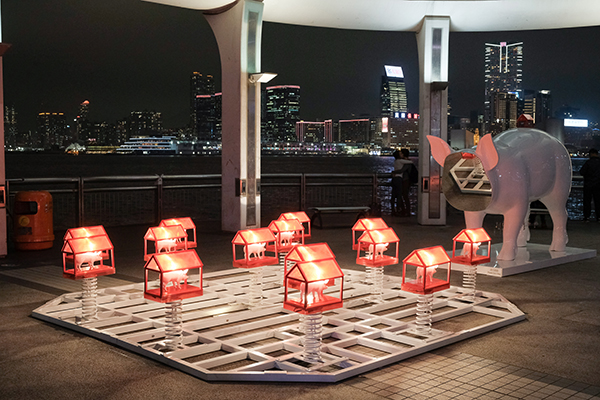 Taking place at various locations citywide, Home? is GayBird’s follow-up piece to a well-received installation that also premiered at the OzAsia Festival 2017. For the Hong Kong edition of the outdoor, interactive exhibition, GayBird adds a question mark to the end of the word ‘home’, inviting the audience to question the concept of home.

Home? is inspired by the Chinese character “家” (home), which is composed of two parts: “宀” representing a roof, and “豕”, a pig. In modern Chinese, “家” can refer to identity, careers, schools of thought and even formal address when combined with other characters. This installation is a literal take on the combination of roof and pig that forms the Chinese character, and a ringing sound is activated upon entering the space which recalls a doorbell.

Home? will be exhibited in Central, Tsim Sha Tsui and Causeway Bay. Presented in either a crowded, concentrated or a structured setting, each presentation guides the audience to embrace the sense of space in different situations. The installation in Central will feature an all-new, 1.8m-tall giant pig, the face of which will be a mirror to reflect the identity of the audience themselves, leading to an open discussion around the concept of home.