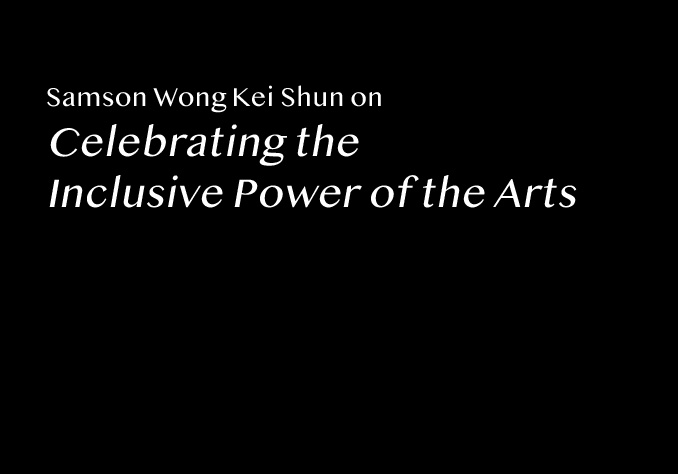 The policy report Celebrating the Inclusive Power of the Arts, released by the Our Hong Kong Foundation (OHKF) this March, is hamstrung by its own reductive view of inclusion and the power of art. Its failure to accurately define its own terms of engagement means that it is condemned to reach over-restrictive, unhelpful conclusions.

OHKF is a high-profile, outspoken supporter of government policies. Its recent report Re-imagining Hong Kong with a Game-Changer: Enhanced East Lantau Metropolis was released at an event officiated by its chairperson, Hong Kong’s first chief executive and now a vice-chairman of mainland China’s CPPCC, Tung Chee-hwa.

Disappointingly, the report suffers from poor arguments and the misuse of key literature to propose an incomplete framework for inclusiveness. The results are recommendations disconnected from inclusion, to be carried out according to a sterilised vision of art.

Celebrating states that it has chosen to value the arts as a means to an end rather than for having any intrinsic worth. This is a simplistic division at a policy proposal level. Since antiquity, rituals and arts have been a vessel for individual processes and social interactions. In contemporary times art has become a highly specialised field removed from function, but the arts as a general practice continue to permeate daily lives and impact societies (Belfiore & Bennett, 2008). Even Art for Health, a UK report heavily cited by Celebrating, connected artistic quality with function by stating that “quality of artwork should be a primary focus of a project’s aims” (Health Development Agency, 2000). As artists, NGOs and some levels of government have realised over recent decades, the arts as a means to an end and them having intrinsic value are not mutually exclusive positions.

Celebrating has identified six areas where art can have a social impact. However, it only focuses on one of them, Health and Wellbeing, while the others, Personal Development, Social Cohesion, Community Empowerment and Self-determination, Local Image and Identity, and Imagination and Vision, are cast aside without explanation. There is no rational reason that a report from an organisation that claims to unite Hong Kong through art should ignore the comprehensive framework that it has built. It suggests the report believes that all six areas can be reduced to Health and Wellbeing, or that art has no impact in other areas. The rationale behind this argument emerges in chapter 2 of the report, Arts Therapy, and its Efficacy on Persons with Dementia, in Rehabilitation, and with SEN, which represents a misplaced dependence on measurable impact. The difficulties and misuses of quantifying the impact of the arts, long studied by scholars, was underlined in the 2016 UK report Understanding the Value of the Arts and Culture, a meta-analysis of existing studies. However, governments and societies all around the world, Hong Kong included, continue to apply the scientific mode of understanding indiscriminately to the arts and culture.

In Hong Kong, either because the arts continue to be misunderstood, or because of the government’s need to be bureaucratically accountable, there is a dependency on certifications that promise standardised quality and methods. In the field of arts, the group that comes nearest to being trained to wield scientific language and having a certificate to prove it is arts therapists – hence the decision to limit the scope of the report to Health and Wellbeing, and the “top-ranked scientific journals and literature” drawn upon being limited to arts therapy.

But arts therapy is not a suitable tool to spearhead Hong Kong and its communities towards inclusiveness; the report’s definition of inclusiveness is incomplete. The task of building an inclusive society through art requires the full range of artistic practices, of which arts therapy is just one among many contributors.

Moreover, studies of arts and social impact rarely mention arts therapists, but instead emphasise the freedom of artists to shape projects that achieve integrated artistic and social goals. As the profession of arts therapy has matured over the past decades, there has been no significant turn towards the social, unlike contemporary artists and art educators in various media, who increasingly work with communities.

The report leaves many causes of social exclusion and sources of social inclusion unaddressed. The vision of the arts in Celebrating seems to be what critic Claire Bishop describes as “to mop up wherever the government wishes to absolve itself of responsibility” (Bishop, 2012).

The unspoken goal of the report could be to propose a kind of art that can be measured, predicted and controlled. Even setting aside political implications, such an agenda is simply poor practice, as the Art for Health report says:

“With many of the best projects being based on intuition, opportunism and personal drive, it is important for the field not to become over-professionalised” (Health Development Agency, 2000).

If not arts therapists, then who? The answer is implied in chapter 3, where diverse examples of art projects actually undermine the report by demonstrating that there are more artists than arts therapists committed to this work. Studies (Crossick & Kaszynska 2016, Lally 2009, Mulligan & Smith 2010 ) have shown the effectiveness of art as hobby, art education and art facilitation, and the important role of non-professionals such as family, friends, teachers and artists.

Over the last few decades artistic collaborations have become increasingly important, to draw on a wider range of skills but also, more importantly, to draw on a range of perspectives that can see beyond neat, compartmentalised problems and solutions. That is the inclusive power of art, already in practice in Hong Kong thanks to an increasing number of artists and organisations.