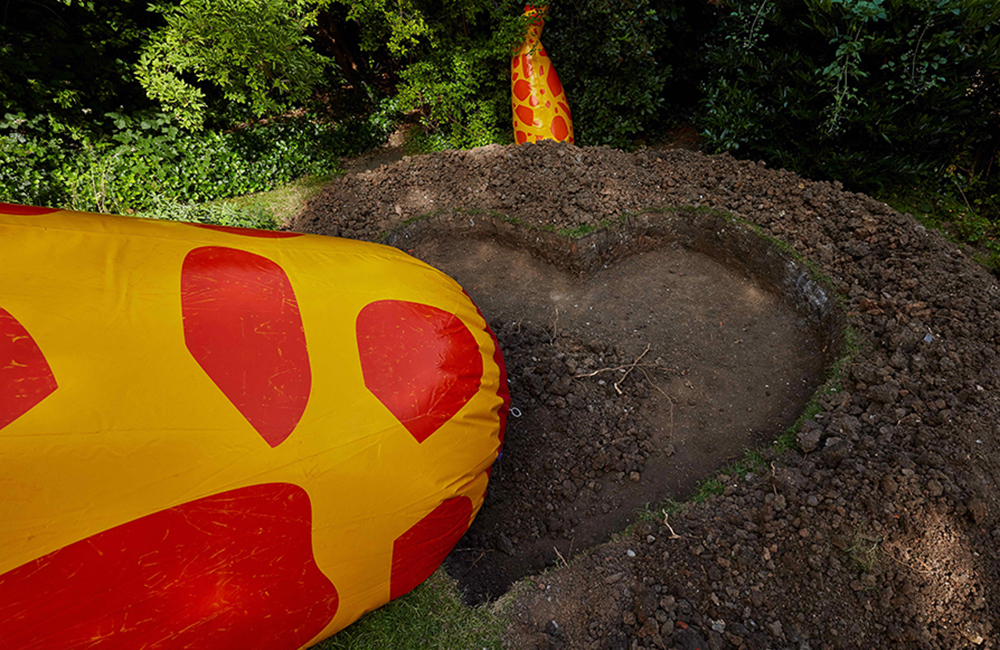 How to write about art when the world is on fire? More specifically, how to write about art from Hong Kong when the territory is experiencing a historic revolution? The answer is simple: art is freedom. It offers a new perspective, a common language to challenge opposition, ignorance and oppression. And Wong Ping’s two-venue exhibition in London does exactly that. Spread across the Camden Arts Centre (CAC) – which awarded Wong the inaugural Emerging Artist Prize at Frieze in 2018 – and the Cork Street Gallery, the works in Wong Ping: Heart Digger employ just the right amount of humour and cynicism to expose the darkest sides of contemporary society in their full absurdity.

Wong unmistakably belongs to the 21st century. Explicitly political, he tackles everything from alienation and taboos to violence and corruption in the age of online dating, surveillance and social media, all packaged in a low-resolution saccharine aesthetic and deadpan Cantonese narration distinctly his own. Who’s the daddy (2017) and Dear, Can I Give You a Hand (2019), each in their own room at the CAC, are among Wong’s better-known animations featuring stylised human characters. In the former, a young man attempts to navigate the labyrinthine world of dating apps, eventually meeting a woman whose fetishes – incompatible with his own – lead to emotional and physical distress. Through this incongruous anecdote about a sexual encounter gone wrong, Wong speaks of loneliness, suppressed desires and romantic expectations with a matter-of-factness that emphasises their universality.

The same applies to Wong’s more recent animations at Cork Street Gallery, grouped under the title Wong Ping’s Fables (2018-19), which exclusively feature animals, including an obese ultra-high-net-worth cow, a maniacal three-headed rabbit and a chicken police officer affected by Tourette’s syndrome. In the vein of Aesop’s Fables and the Grimms’ Fairy Tales, these stories begin with the conventional ‘Once upon a time…’ before recounting the events that led to the protagonists’ demise. There is no ‘Happily ever after’ in sight, only soured relationships, intense suffering and death. All the animations are tragic, but they are also hilarious. Complicit voyeurs, we are made to laugh at the expense of characters whose fates inevitably take a turn for the worse, not only as a result of their own actions but also because of social, economic and political conditions beyond their control.

Motifs and characters from the video works have been extracted from their virtual realm and brought into the physical space of the galleries. At the CAC, thousands of gold-enamelled toy dentures in a mound seem to bury the free-standing screen displaying Dear, Can I Give You a Hand?; Wong’s trademark upside-down heart, unequivocally resembling a cartoon scrotum with facial attributes, crowns the centre’s entrance; and the neck of a giant giraffe emerges from dug-up soil in the garden. The giraffe’s severed head reappears in the green-tinted exhibition at Cork Street, its tongue hanging out, along with an equally large rabbit float. In a short wall text written by the artist at the time, we learn that the giraffe’s neck is in fact a tunnel built by Hong Kong’s chief executive and her officials to hide from the protests.

These whimsical fantasies dreamed up by Wong but based on real-life observations denote a profound distrust in Hong Kong’s government, felt by many across the city as the protests continue to gain momentum. There is an implication that under the current circumstances, most paths lead straight to misfortune. While the scale of both the large screens and the blow-up sculptures felt gimmicky at first, this is only because they take time to have their full effect. They shrink everything around them, and in doing so place the viewers firmly in their universe. The cynical world that Wong depicts is our very own, one we’ve created and one in which we all play a central part.