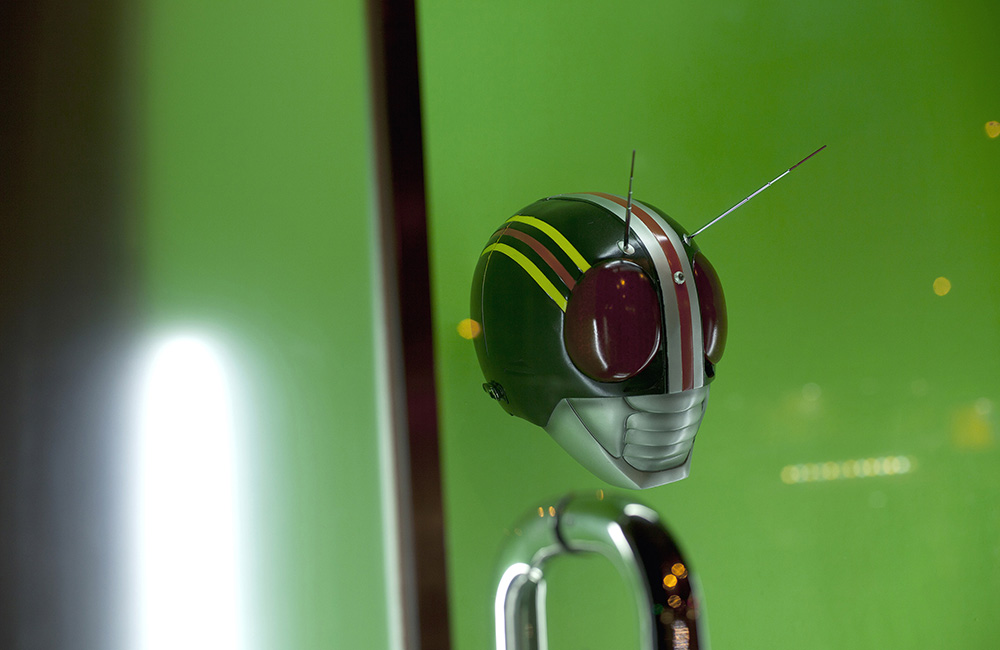 This June, a photo circulated on social media of a small group Hong Kong-based artists, writers and gallerists standing outside the Congress Center in Basel, Switzerland. Away from Hong Kong for Art Basel and concurrent projects, they showed their support for demonstrators at home with handwritten signs decrying the proposed extradition bill. Nadim Abbas was among them; the artist was in Basel for his solo show Poor Toy at Vitrine (June 11 – August 25), which referenced the horror and banality of domesticity through sculptures including vacuum cleaners and hacked Ikea furniture.

We met in July after he’d returned to Hong Kong. Abbas lives and works in a flat not far from the University of Hong Kong, where he earned his MPhil in 2006. He suggested sitting near his computer where it was brighter; the afternoon sun streamed through the windows onto wall-to-wall bookshelves – fitting for an artist who often references methodically researched science fiction, psychology and philosophy in his work – keyboards, several guitars and a piano with the lid closed. We began by talking about music.

Elliat Albrecht: How long have you played the piano? Nadim Abbas: It’s hard to say – you could say I’ve never really played. This is my mum’s piano. I taught myself to play guitar during high school. Then my mum moved house and she couldn’t take this to her new place, so I took it.

EA: I heard you wanted to start a band with Wong Ping. NA: We’ve been talking about it, but it hasn’t happened yet.

EA: Instead he’s started a band with Man, Kwan Sheung Chi and Wong Wai Yin’s six-year-old son. NA: Yes, when I mentioned it, he [Wong Ping] said “We’ve got to get Man involved.” I asked him, “How?” I’ve never met Man properly. I’ve seen him at openings but we’ve never spoken.

EA: I think you’d get on well. He’s also deeply interested in science and makes perfectly scaled drawings of the solar system. Are you in a band now? NA: No, that’s why I wanted to try this thing with Wong Ping. I’ve had ideas for a number of different musical projects. I used to sing in a synth-pop band called A Roller Control. We were okay, but I couldn’t sing very well. If you’re in a pop group, you should at least have a good voice.

EA: Do you ever incorporate your own music into your art? NA: Let’s say that I take cues from the spirit or methodology of music-making and try to apply that to the way I do other things, such as the way I approach space and sculpture.

EA: I’ve heard a few artists extol music above other art forms recently, perhaps due to its capacity for affect. NA: I also feel that music touches people more. For me, the challenge is to take that affect and try to apply it to something that would not in its seemingly natural state move people in that way. It’s almost like trying to achieve the impossible. On the other hand, when I’m making music, I go about it in a much more analytical and methodical way.

EA: You’ve said that you think about a project or an idea for a long time before you make anything. NA: Yes, I’ve been thinking about music all my life and haven’t made much. So maybe that’s a perfect example [laughs]. All my self-initiated music projects, the ones that I dream about, I don’t know if they’ll ever happen. But there’s a sense of urgency when you involve other people: when you’re in a band, you must make decisions, you must turn up to practice and commit.

My work as a visual artist has always been more solitary, at least until recent years. Maybe it’s the influence of the musical process that’s encouraged a concerted effort to collaborate. But after a certain point, there comes a desire to go back and do your own thing.

EA: You’ve also said you tend to look back at your old work and see things that you would change. NA: There’s always an element that’s not fixed, maybe because of the way I work. It begins with a long, somewhat diffuse reflective phase, and then an imminent deadline appears. Have you been sailing? It’s like that. Sailing consists of long periods of complete and utter boredom, punctuated by moments of sublime terror.

But sometimes things get better or more focused when pushed through with such intensity; it lends a sense of spontaneity that you wouldn’t otherwise get with something ultra-planned. To return to music, I’ve always been interested in improvisation; it requires training yourself to be able to do things off the cuff. There may be a predetermined structure, but you can play within that.

EA: Your show Poor Toy in Basel this summer isn’t the first time you’ve shown in a window-like environment. There was also your exhibition Camoufleur in London (2017) and 2016 project at Holy Motors. NA: That setup is something that I’ve always been quite drawn to, because a window suggests separation. Much of my practice deals with the invisible thresholds that exist between the viewer and the art work.

EA: Do you try to keep the viewer out or let them in? NA: I tend to jump back and forth. The interesting thing for me is walking the tightrope; I’m always trying to balance on a very thin line.

EA: It seems that balance is something that comes up a lot in your work. NA: Yes, maybe. I’m a very indecisive person.

EA: By staying in the middle, you don’t have to choose. Every choice is a veil for a million other choices, and everything in life is made up of a million decisions that we must resolve at every single step. But one must be able to bracket oneself off from this kind of thinking, or else get trapped in paralysing immobility.

EA: “Veil” is an interesting choice of word; instead of every choice rendering another impossible, a veil implies that alternate possibilities still exist but are just concealed. NA: There are some interesting passages in Philip K Dick’s 1965 essay Schizophrenia and the Book of Changes, in which he outlines the pathology of schizophrenia. He describes it as the inability to make a choice from a series of possibilities. His solution to the problem was to turn to the I Ching, the ancient Chinese oracular text. For Dick it was a useful aid to get out of this perpetual schizoid present. He actually used the I Ching to write a few of his books, like The Man in the High Castle.

EA: I can imagine multiple futures, but find it difficult to conceptualise multiple presents. NA: Each present in which we live could conceivably
be just one of many. Not necessarily someone else’s, but one simultaneous present. It’s quite terrifying, but a very plausible idea. So much science fiction – well, the kind that I like – uses these ideas. Especially Dick.

EA: Do you ever use similar strategies to help you make choices? NA: I’m inspired by these kinds of literary devices, but again, it’s somewhat like music translated into visual art; when you think about certain forms of literature and try to translate that into something like sculpture, something becomes lost or impossible. There’s this seemingly real aspect of an object that you now hold in your hands, whereas the beauty of literature is its ability to create a world with which to imagine this object.

EA: Do you think that art objects can have literary qualities? NA: Yes, I do, but that depends on how you imagine these things. Of course one role of the artist is to try to get people to imagine. I always use the example of déjà vu, because it’s exactly the type of elusive sensation I’m interested in.

Everyone has their own trigger that leads to that moment. But of course it would be impossible to make or create anything that would automatically trigger such a response.

EA: So you don’t think déjà vu can be provoked at will? NA: No, it can’t. But I try to reverse engineer it somehow and bring that into my work. I’m not trying to trigger it, but rather trying to understand it from a psychological or phenomenological perspective.

EA: Your interest in immobility seems pertinent now in Hong Kong. Maybe there’s a sense of futility here. NA: I have asked myself how my work can be placed in the current situation. In much of what I’ve been doing over the past few years, the entry point has been figures like otaku and hikikomori: people who shun society at large, who escape into a world of their own making. But when the Umbrella Movement kicked off in 2014, an unprecedented sense of community and solidarity emerged. One needed to question the previous assumptions we had about what Hong Kong people are like. So obviously, the context has completely transformed. Whereas previously I could casually talk about my work in terms of social isolation, escapism or breaking away from the status quo, now it is these very same concepts that have undergone mutations in relation to the fractured divisions within society.