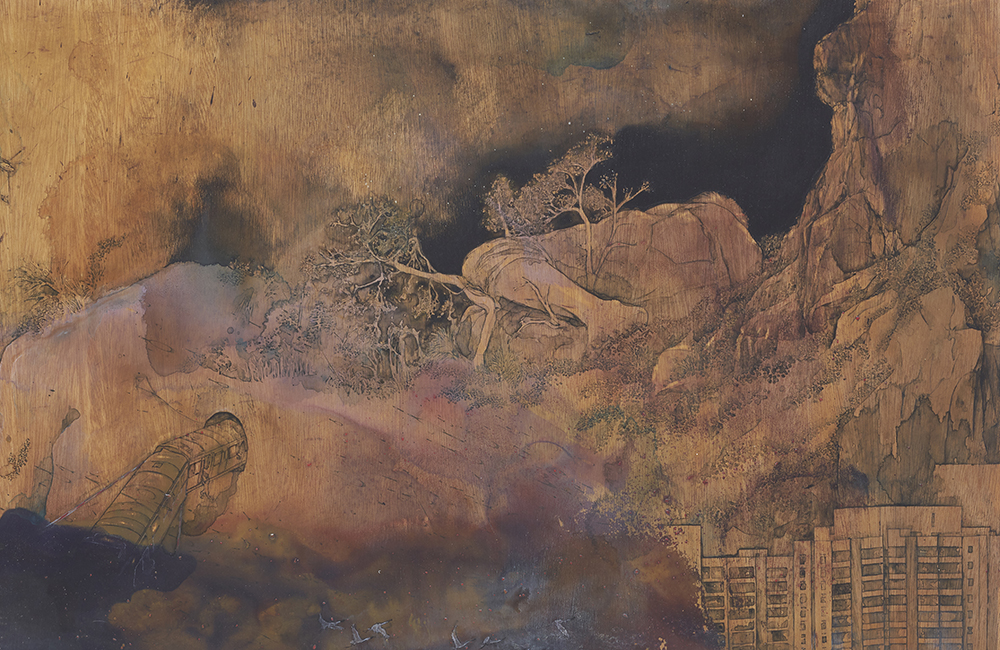 Bouie Choi Yuk Kuen reminded me that we first met when she and fellow Chinese University of Hong Kong fine arts students were invited to use empty units of the former Police Married Quarters in 2008 to show their work before its closure for renovation into PMQ. This was a touching memory; the battle to save the historic PMQ was one of many campaigns to save Central Hong Kong’s heritage buildings in which I was involved. After its closure as residential quarters for the police, the PMQ units were decrepit and had seen no paint or repair for decades: perfect for artists to use and fill with sound, lights, videos and found objects for their installations – or, as Choi did, hang paintings on dusty walls of ripped wallpaper. Hong Kong’s old colonial city also plays an underpinning role in Choi’s recent work, the physical remains of the past under attack.

After Choi’s early experiences with the unrenovated PMQ, and later seeing that site and its modernist buildings conserved, she was a community worker for six years for local charity St James’ Settlement on a similar heritage preservation project: the historic Blue House, a rare colonial-era terrace building in Wan Chai. Choi mixed with the local community and businesses, many of them car repair shops, and organised community activities with local kaifong and community associations, drawing on her art skills, friendly personality and calm understanding of others.

The Blue House adopted a classic community work approach: Choi and her colleagues facilitated events and activities together with the local community. These years were a defining time and Choi understood that she wished “to give to society” and that “I needed to be good to myself, to be able to give back”. She broadened her knowledge of Hong Kong history, its diverse present and unique culture. She was personally enriched hearing residents’ stories and becoming close to the local community. Especially happy were sessions with young mothers and their children organised by Choi, which also included anyone else visiting the Blue House at the time.

Before that solid stint of full-time work and after graduating from CUHK in 2009, she completed graduate studies in London in 2012. She recalls: “That time was all white, a blur. I did public performances: a waste of time – it confirmed for me that I wanted to be a painter.”

As a painter, she has exhibited at Grotto Fine Art on average once every five years. Always prepared around her other work, her art has evolved over these years. Known in the past for carefully beautiful paintingsdepicting animals and insects, often in symmetrical formations with a fantasy-like ambience, her current work is “multiple

layers of me; violent and tender”. She particularly has put into practice the advice of her former CUHK teacher Chan Yuk Keung that art should have “physicality, cultural significance and spirituality – to ensure that art is differentiated from, say, design”.

Her latest exhibition at Grotto, borrowed space _ borrowed time, takes its title from the book published in 1978 by the ebullient Australian journalist Richard Hughes, The Times of London’s long-time Hong Kong correspondent, whose sculpted bust stands sentry in Hong Kong’s Foreign Correspondents’ Club and who is immortalised as the doughty journalist Craw in John le Carré’s spy thriller The Honourable Schoolboy. Hughes wrote: “Hong Kong is a borrowed place living on borrowed time … [and] is an impudent rambunctious free-booting colony, naked and unashamed, devoid of self-pity, regrets or fear of the future.” Hughes describes the city’s gritty, indomitable spirit, popularly known as the Lion Rock spirit, of business savviness, an ability for hard work and long hours, in an anything-goes capitalist economy.

By 2019, many living in Hong Kong were missing out on the opportunities offered by the city’s relentless free-wheeling economy. Generations of the elderly, disabled, sick, new immigrants, and the city’s many low-skilled, low-paid workers have been overlooked by success. The government’s Hong Kong Poverty Situation Report 2018 indicated that 20 per cent of the city’s population, or 1.5 million people, live below the poverty line. The Hong Kong spirit, evolved under British colonial rule, now also embraces greater political and social awareness. The drive for self-betterment remains strong, but now understood are the inequalities between rich and poor, government protection of business monopolies and anger about the lack of real universal suffrage guaranteed under the Basic Law and an unelected, executive-led government.

Choi’s careful planning for this exhibition took an unexpected trajectory. After leaving her job at the Blue House, the second half of 2019 was to be devoted to full-time painting. However, amid controversial extradition legislation and public demands for the government to deal with a host of domestic economic and political issues, Hong Kong imploded with increasingly fractious anti-government protests and violence. The city also became caught in international geopolitics and escalating trade tensions between China and the US.

It was an unprecedented and highly charged time. Every corner of Hong Kong was hit by the tension and drama of months of protests. It felt as if daily life was on hold. Choi says she was “paralysed” during these months. She had no ideas for new paintings. She did not paint.

Except for preparing The Fallen Petals and painting The mountain city in November and December 2019 as an immediate reaction to events, she did not paint until after February 2020. Then, she “tried to fix [herself] through painting”. Covid-19 had begun to spread and Hong Kong’s weekly anti-government protests had trailed off as awareness of the virus grew and social distancing restrictions were introduced. Choi’s imagery in the exhibition is dragged from the depths of those tortured, anguished months. Her emotions, however, are in a higher place. She says: “Let me explain before I start murmuring something incomprehensible: this is an exhibition about my beloved homeland; this is about the remained, the authentic, the precious.”

Setting the tone of the exhibition at the gallery entrance is The Fallen Petals, a pressed bauhinia flower, still holding its distinctive purple colour and displayed between two transparent acrylic panels angled out from the wall. The city’s flower emblem casts a shadow, like a sad, out-of-focus photograph, as if Hong Kong is a shadow of its former self. This sets a tone, but the ambience of the exhibition is better felt a few further steps in, when surrounded entirely by Choi’s paintings. The exhibition comprises paintings with thinly applied acrylic – a watercolour impression – on paper. These contrast with the major work of the exhibition, Choi’s ‘black’ paintings: waves of ominous black-indigo applied on golden-hued, varnished wooden panels. Emerging between blotches of paint, mountains and valleys is a dystopian maelstrom. Hong Kong is hit by a tidal wave, engulfing buildings, objects, lives, emotions and good sense.

The work A borrowed place on borrowed time is Choi’s largest ever painting, a six-panel landscape of the city. Bathed in shadows and light, Hong Kong’s government headquarters, the Central Government Offices, stands intact (just), but the rest of the city is threatened by the long claw of demolition.

The city and its unique street ambience – for example street markets, low-rise tong lau buildings and neon signs – have long been threatened with physical redevelopment. Hong Kong people are accustomed to their city being a property developer’s marketplace, with their lives upended by noise, dust, inconvenience and possible compulsory acquisition. Choi’s claw is depicted physically, but its demolition is also a prelude to possible fundamental cultural changes: the city’s Cantonese language subsumed by Mandarin; a free press replaced with media restrictions; schools with an increasingly controlled curriculum.

The mountain city depicts The Chinese University of Hong Kong under siege. In mid-November 2019, all of Hong Kong’s universities experienced seriously violent clashes between police and protesters. The most serious were at CUHK and The Polytechnic University of Hong Kong, which both saw pitched battles with police firing thousands of rounds of tear gas, water cannon volleys and rubber bullets as protesters built barricades and returned fire with Molotov cocktails, stones and, at PolyU, arrows. Choi’s pall of smoke and tear gas above CUHK’s hillside, seen from Tolo Harbour, is a dramatically iconic and poignant depiction of that month’s messy confrontations.

The surf watcher personifies the challenge that Hong Kong protesters repeatedly threw at local governance, police authority and government sovereignty. Is the flaying octopus with its akimbo tentacles depicting Hong Kong people or the government during the protests? Whoever it is, a mutually destructive denouement is taking place before our eyes.

Choi’s work on paper is a counterpoint to the ‘black’ paintings. The wood-panelled paintings give a broader-brush view of the protest era, whereas the works on paper give a focused photographic intimacy and are stripped-back studies for the larger paintings. Single trees, often fallen, and groups of pot plants feature in the smaller work. Hong Kong’s trees and pot plants have a precarious existence: the wind, heavy rain, typhoons and the city’s concrete streets are tough on plants, but they are resourceful and hardy. Just like the people.

Embedded in all of Choi’s paintings are small painted details significant during the protests: a protester in an athlete-like throwing pose; stacks of ‘iron horse’ barricades; safety tape criss-crossing a painting; a figure lying on the ground; figures in windows; a fire; witches’ hats; roadside figures; two striding figures carrying a flag; silhouetted figures, actually shop mannequins, standing outside a possibly just trashed bank. There are hanging hillside trees; more pot plants; balconies; distant housing estates. The city has tunnels and hillsides and views onto rooftops and into windows and along streets and inside carparks and a glimpse of beloved Lion Rock. The details are psychotropic in their flashed-vision variety.

The exhibition’s final painting, Retournées, dating from 2017, is an almost traditional scroll painting employing Choi’s careful earlier painting style. Depicted are two boats, each holding a windswept tree, with the horizon splitting the painting into two. In its top half are wispy banyan tree roots attached to a wall; below is a calm sea. Anyone who has ever chosen to live in Hong Kong, or who arrived from mainland China during its many 20th-century upheavals, will see the city’s past hope and fragility. Hong Kong’s own upheavals and future uncertainty are reprised in this painting. This is Bouie Choi’s “beloved homeland”.