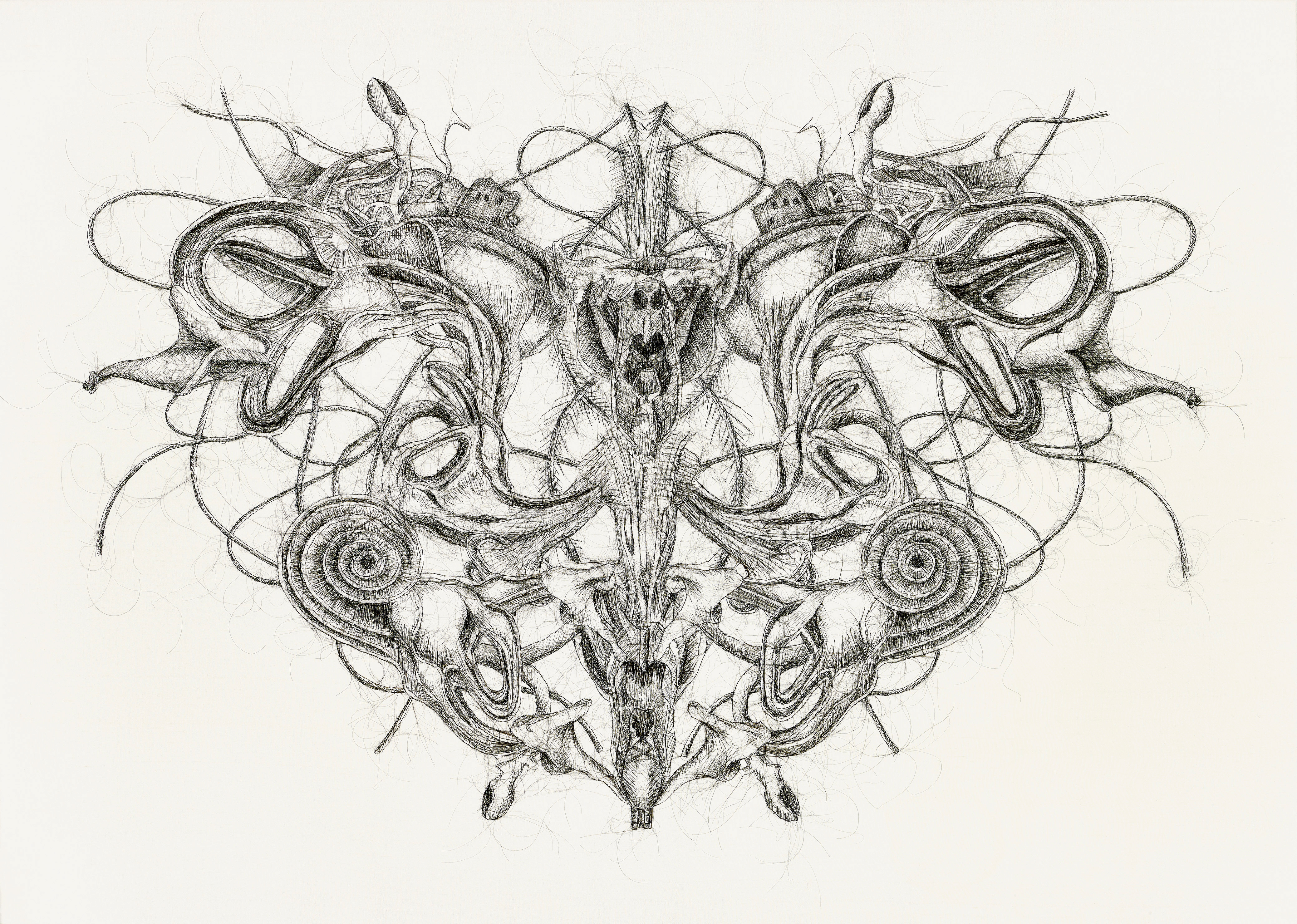 Caroline Ha Thuc: You are well known for your ink drawings featuring strange creatures that combine human and animal elements. Do these creatures reflect your vision of contemporary humanity? Angela Su: Probably. I contemplate how human beings can exist alternatively. With contemporary science the imaginations of human beings are often reduced to numbers and scientific data, whereas in ancient times the understanding of the body was abstract, allegorical and instinctive; the spiritual was intertwined with the physical. Of course there was a lot of superstition and it was highly inaccurate from the perspective of contemporary western medicine, but I am attracted to the kind of imagination brought about by destabilising the accepted understanding of the body.

CHT: Is there a philosophical idea behind this approach, such as perceiving the world as a whole? AS: There is no particular philosophical idea behind this approach. It was just based on my consciousness and empathy as a human being. We lost our connections to nature and all creatures when human instincts were suppressed for the sake of maintaining a civilised society, and when we began to think that we were the chosen ones.

CHT: There is also a kind of gothic aesthetic in all your work, stemming from the recurring dreams of vampires and zombies you told me about. What is your relationship with death: do you find beauty in it? Is art able to exorcise your fears?
AS: Looking at my work objectively, I suppose the feeling of mortality does creep up from time to time as I am dealing with the body, pain and the pleasure of pain. I find darkness, silence and nothingness peaceful and beautiful. We are all equal in death. I have a feeling that most people are not afraid of death; rather it is the way we exit this world that is horrifying. That is my greatest fear, too. I don’t think my art exorcises my fears; rather it gives me the opportunity to face them.

CHT: You refer to medieval French literature in your embroidery series Blasons Anatomiques du Corps Féminin: why? AS: This was a collection of French poems from the Renaissance. The poems were written in old French and each poem was dedicated to one specific part of the female body, from the hair to the knee to a teardrop. The body was fetishised, praised and scorned at the same time. I came across the Blasons in a book I bought a long time ago, The Body in Parts: Fantasies of Corporeality in Early Modern Europe. One of them was about the hair, so I thought this would be a perfect text to be embroidered. I started with it and then went on to embroider more. It made sense at the time because I just wanted to spend my time doing this one singular task. My brain was taking a rest while my body toiled away with sewing. It’s a way to produce and not produce.

CHT: Embroidery is a stereo-typically feminine task: do you also question the role of women in our society, and the symbolic use of their bodies? AS: My work is not about feminism. I don’t consciously explore the role of women in society in my art, although I think this is a very important issue. For me as an artist and as a woman, I am more interested in my struggle against the inclination to produce typical feminine art. Is this kind of art rejected because we have learned to embrace male-oriented aesthetics? This is a question which is impossible to answer.

CHT: Narration, through literature but also through stories or documentation, seems to be important for you. How do you entwine fiction and reality? AS: I am interested in the connection between things, be they events, people or thoughts. One thing leads to another, sometimes in the most surprising manner. I enjoy bringing out these connections through narration. A fictitious element is a great tool to fill in the gaps in the connections, creating myths and further opening up the imagination. I think this is particularly important in creating research-based art.

CHT: You often say that you love medical and botanical drawings. What attracts you most: their subjects, their style or the utopia they embody? AS:Early maps, drawings of machines and all natural forms are aesthetically pleasing to look at. Scientific drawings from the 1800s represent the European obsession with organising the world, which renders visible the driving force behind western imperialism and colonialism. These drawings also represent an authoritative truth that is still recognised today. On the other hand, earlier drawings are a lot more stylised. The images, as accurate as they could be at the time, often oscillate between fantasy and reality. They are fascinating to study.

CHT: Do you aim to highlight that there is no truth and that all knowledge could be a lever for power? AS: I believe that there is no truth, but a series of constructs. I recently noticed that in dystopian films love is portrayed as the only truth at the end, where in earlier films it was more about good versus evil. I guess we are at the stage where we are disillusioned about current economic, political and belief systems. I would say perhaps fear and desire are the closest things to the truth. However, these are just conceptual thoughts and discussions. I wouldn’t say these are the guiding principles in life.

CHT: Be it with hybrid bodies or recent research about hysteria, you challenge the idea of normality and shed light on contemporary taboos. AS: It is not my wish to challenge the idea of normality, or at least it doesn’t start out as such. My attraction towards things that are outside the norm is fetishistic. It is almost a juvenile fascination with monsters, freaks or witches. Everything starts from there. As I dig deeper, different things begin to surface: the construction and cultural significance of these monstrous beings, our fear and desire, the question of normality and ultimately our own place in society. I find the instability of norms and rules fascinating.

CHT: How do you position yourself as an artist in society? AS:As an artist, I live in my own head. I never feel that I am part of anything and I don’t think Hong Kong culture has any impact on my work. For me, art itself is useless at responding to a specific context – or at least the art that I produce is.

CHT: Are there any artists or art movements that you admire, or who influenced you? AS: I’ve liked different artists at different stages of my life. Currently my favourite is Pierre Huyghe. I like Harun Farocki’s films, and Walid Raad’s approach in his research-based practice. Viennese Actionism fascinated me when I was first exposed to it. There are too many to mention here. I love works that give me butterflies in the stomach.

CHT: Finally, do you like talking about your own practice? AS:No, I don’t like talking about my own practice and I am very bad at expressing myself verbally. Art-making is a very private thing and I feel vulnerable when I talk about my practice. I feel that people do not only judge my art but at the same time judge me as a person.