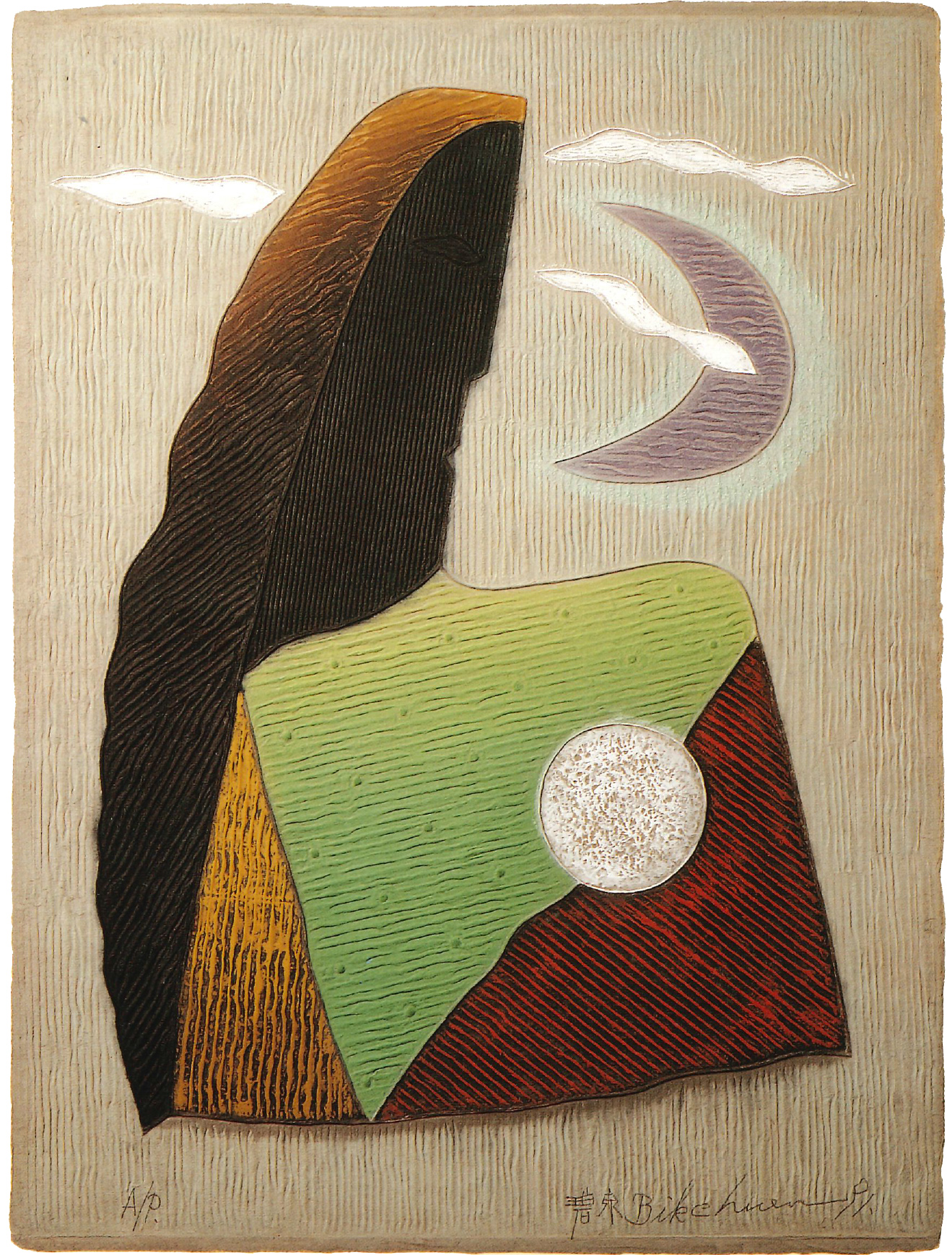 For over 50 years, Hong Kong artist Ha Bik Chuen (1925-2009) built a large collection of art exhibition catalogues, art books, magazines, and clippings from newspapers and other printed matter. Often accompanied by his wife or children, Ha also photographed every art exhibition he visited, and his photographic archive comprises hundreds of boxes of prints, contact sheets and negatives. Now known as the Ha Bik Chuen Archive and featuring thousands of individual pieces, it is a historical collection of Hong Kong art and Ha’s resources, a glimpse of past international art trends and a personal record of Hong Kong’s art scene between the 1960s and 2000s.

The collection was formerly housed in Ha’s crowded home and its rooftop in Shim Luen Street, To Kwa Wan, where his family kept everything intact after his death, as he wished. It has now been boxed and relocated to a Fo Tan industrial unit where the Asia Art Archive began a three-year project in 2016, funded by the Hong Kong Jockey Club, to catalogue the material and use it for research.

Ha arrived in Hong Kong from mainland China in 1957, aged 32, and immediately set out to become a full-time artist. His diary entries from 1959 describe the personal and financial difficulties that involved. However, he soon met likeminded friends with whom he could exchange information, organise art outings and provide mutual support; and he was also dedicated to self-study and self-learning. This, for example, is how he learned photography: “In the first six months after buying my first camera I entered an intense period of self-instruction, learning to handle the camera, making it an extension of myself. After 100 rolls of film I realised that I was a captive of an art that is part science, a science that is also an art.”

Ha approached being an artist through a similar process of self-learning. He was assiduous in collecting all sorts of material related to art, which he would study, incorporating ideas into his own work. After seeing the relief paper prints of fellow Hong Kong artist Cheung Yee, Ha wished to master the technique himself. He did so by looking, reading and experimenting: carving a wooden mould or template of the intended design, mastering the colouring of the template, and then learning to carefully apply wet paper onto the template to produce a beautiful relief print. His prints featured recurring motifs that were seen in all his work – leaves, the sun and moon, wood patterns, Chinese text, nudes, cubism-inspired faces – all executed in nature’s earthy colours: ochre, browns, greens, reds.

His earliest block prints from the 1960s and relief prints of the early 70s were Christmas cards, executed with the additional aim of trying to network with the art world. These early prints exemplify his determination for advancement. Ha explained, in a 1981 catalogue statement:

“I spent lots of time and effort each Christmas designing and making 100 cards which I sent to my local and overseas friends in art circles, hoping for a positive response from them so that we could exchange ideas, share experiences and encourage a creative atmosphere. But I was disappointed. There were few replies, let alone positive ones.”

In the 1960s and 70s, Ha Bik Chuen’s family supported themselves by manufacturing paper flowers and other crafts, but he achieved his ambition of becoming a full-time artist in 1976, mainly supported by the sale of prints. In 1978 he won a prestigious sculpture commission with his design Sailing in the Sun for Aberdeen Square, the open space that is surrounded by Aberdeen Centre’s tall residential towers.

Situated in the middle of Aberdeen, conveniently near the indoor market, public library and minibus stops, Aberdeen Square is now a popular sitting area, especially among elderly people. Amazingly, this outdoor space has never been upgraded, but retains its original design, materials and colour scheme – predominantly brown tiles, so popular at the time. It is a snapshot of 1970s east-meets-west landscape design; it features chinoiserie architectural details, setting the tone of the space as a stylised enclosed courtyard garden.

There are Chinese arches, or paifang, at each end of the square, but the green-tiled roofline running lengthways along it gives the greatest sense of enclosure. Each quadrant of the square features a small pavilion, while faux pillars and balconies overlook the space to complete its garden setting – one that is largely devoid of greenery. Undoubtably feng shui was a consideration for the square’s architects, as a pool of water is prominently placed in the middle. Nowadays, the pool is often empty and the fountains an occasional trickle. In the middle of the pool is Ha Bik Chuen’s Sailing in the Sun.

Ha’s sculpture directly references Aberdeen’s close relationship with the sky and nearby sea using two of his favourite motifs, the sun and a torso-like structure. The sculpture’s two upright flanges/sails support the sun and at certain angles resemble a torso. The Ha Bik Chuen Archive contains countless magazine clippings depicting these shapes, which are also replicated in his prints and photography.

However, Sailing in the Sun is an interesting anachronism, an overtly modernist sculpture in a Chinese neoclassical garden. At face value it appears to be an odd choice, as the sculpture sits uneasily and separately from its surroundings, but it probably reflects conflict between property developer and architect: conservative design versus modernism. Uncannily, Ha’s abstract sculpture is a serious addition to the square, saving it from being incongruous kitsch.

Sailing in the Sun is also important in Hong Kong’s art timeline, as an unusual, rare early example of non-realist contemporary sculpture executed by an artist in a public space. Rather than inviting artists, Hong Kong public sculpture has often been designed by fabricators with technical or engineering skills rather than any overt artistic sensibility.

Consequently, much of the city’s displayed public sculpture can be woeful. Ha’s Sailing in the Sun broke, if only briefly, with that trend. But its integrity has for many years been compromised by its use as a convenient hanging structure for light displays and festival decorations. Its surroundings, particularly the concrete podium on which it sits and the pool in which it is located, urgently need upgrading.

Picasso was probably Ha’s biggest influence. In his collection there are countless books, articles and clippings about Picasso and his art, in particular material about Picasso’s interest in African art, bullfighting, ‘primitivism’ and tribal art.

Using Picasso’s cubist/African masks as inspiration, Ha was also attracted to 1960s and 70s “junk art” – populist sculpture made from anything at hand. Initially using bamboo for his modernist sculptures, later in life Ha developed his own stylised, figurative sculpture of hand-carved wooden figures and heads mounted on found objects, usually old metal, metallic kitchenware or bamboo, often standing on old boots. The results frequently verged on kitsch, but Ha is unique as the only Hong Kong artist whose work has been inspired by naive or outsider art: work created by people who unknowingly made art objects. These outsider artists often had medical or psychiatric conditions, were not trained in fine art, and were outside the established art scene.

Ha’s own background as a self-taught artist meant he had an affinity with outsider art alongside a genuine interest in the vernacular Cantonese ingenuity of improvised street design. His found-object sculptures have a different sensibility from the modernist Sailing in the Sun and demonstrate a conscious and deliberate change in interests, countering the prevailing modernist aesthetic of contemporary sculpture.

The great French artist Jean Dubuffet championed outsider art, and his comprehensive collection of outsider art, or Art Brut, can be seen in the Swiss city of Lausanne. Ha would have subscribed to Dubuffet’s belief that “true art is always found where it is the least expected, where no one thinks of it or mentions its name. Art hates to be hailed or recognised.”

Ha depicted Dubuffet’s views in a weeklong exhibition at the Hong Kong Arts Centre in 1981. He exhibited a series of photographs of sculptures that were naturally formed by the elements or unknowingly by human intervention. Reflecting on these photographs and displaying the confidence – indeed, the pride – of someone who had worked hard and was an acknowledged exhibiting artist, Ha said: “I have been everywhere, and seen everything, because I have lingered where others hurry past.”

That could be the maxim that signifies the Ha Bik Chuen Archive: don’t hurry, sit down and learn – with determination.

This essay, in part, was previously published in Ming Pao Weekly, October 14, 2017 (in Chinese, translated by Aulina Chan). It is also similar to the catalogue essay accompanying the exhibition Sailing Through Ha Bik Chuen’s Archive at Spring Workshop, October 14 to December 23, 2017, curated by John Batten.