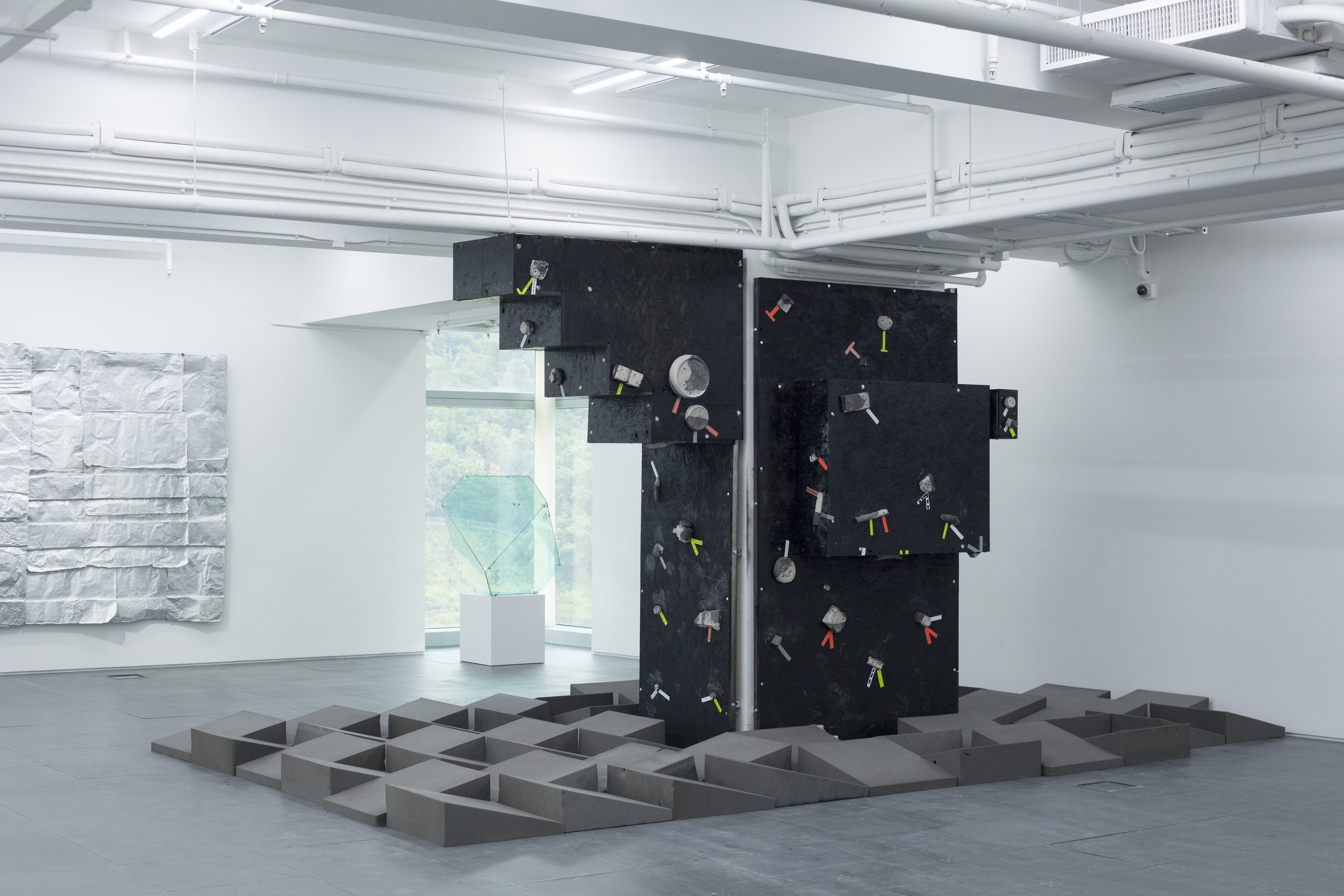 Andrew Luk’s short exhibition Practice was the culmination of the Hong Kong artist’s month-long summer residency at de Sarthe Gallery. Given a large section of the gallery to use as a working studio, Luk collected a range of material to produce mixed-media installation pieces, some directly integrating with different physical parts of the gallery. The result was an exhibition with a rawness that was embellished by the finished beauty of the wall-based pieces (his Horizon Scan and Catalyst Kit series), alongside experimentations that successfully moved from studio idea to resolved sculptural form.

The main installation Black Square Problem Setting (we’re talking about practice) references Russian artist Kazimir Malevich’s minimal painting Black Square (1915), which, radically for the time, was free from all content. Malevich commented: “I transformed myself in the zero of form and emerged from nothing to creation, that is, to Suprematism, the new realism in painting, to non-objective creation.”

Luk evolves Malevich’s idea, literally putting the audience back into the picture by building a functional climbing wall around a gallery pillar. He says in the exhibition flyer that when “… more climbers take to the structure, (using) the hand and foot holds, (it) gives the work an accurate sense of its actual form, addressing a dependence on people at large applying value and personal experience to art. Even if at times it seems to exist in a hermetic space”. In other words, even if art is obscure or isolated from the real world, it will have content if there is an audience present. Luk thus fulfils one of conceptual artist Marcel Duchamp’s key components for an art piece to be art: the necessity of having an audience to view it.

Luk’s Peep Holes continues this idea of audience engagement, getting the audience on its knees to look closely through peep holes drilled into the gallery floor. This voyeuristic action gives a glimpse of a subterranean world of people engrossed in their smartphones and laptops. However, it is not the content on the monitors of the glimpsed electronic devices that is of interest, but the entire action of the audience: bending over, looking and then, possibly, reflecting on what they have seen and done. The entire action is the art. There is a similar intention in the intriguing video Escavator; showing a remote-controlled vehicle with attached camera manoeuvring beneath the gallery’s floor. This floor is not as solid as it looks; it is a facade, a false floor. The video could be an exploration of an excavated setting such as a cavern or tunnel, but it also suggests a followed escape route. The audience is privy to any possible scenario, but it is an unsettling feeling having such a rat-like view and knowing that its viewpoint is under control, albeit by the artist. Luk allows the audience a glimpse of this hidden place to channel multiple fictitious stories.

Luk employs familiar, everyday objects and stretches their usefulness with carefree violence. Taking a cue from the techniques of producing a relief print, Compression Lifting is an impression of the interior of a lift in a nearby Wong Chuk Hang industrial building. The aluminium foil has been bashed, pressed and cajoled to become an elongated interior landscape. The result has a silvery, lunar, otherworldly luminescence, far removed from the boxed claustrophobia of the original lift, showing the beauty in mundane objects. Luk’s Catalyst Kit series is a jumble of arranged objects within a rectangle of set resin held in place by an impression of bubble-wrap, like food preserved in aspic. These are beautiful finished pieces with a touch of intrigue: the minimal but organised combination of found objects prompts speculation about the artist’s intentions.

Luk completed two Distilled of Fire Leaves pieces using plastic air-conditioner covers as their main components. The plastic covers are intentionally and expertly burned. The result is a melted, surreal, contorted spider web-like form, which is spotlit to cast an eerie shadow on the gallery wall and floor. Such a technique sits at the cusp of success and failure in production – there is trepidation, like a nervous ceramicist awaiting the opening of a kiln to reveal the results of a firing. Luk’s work is exactly that: experimentation, thoughtful and often daring, through practice.