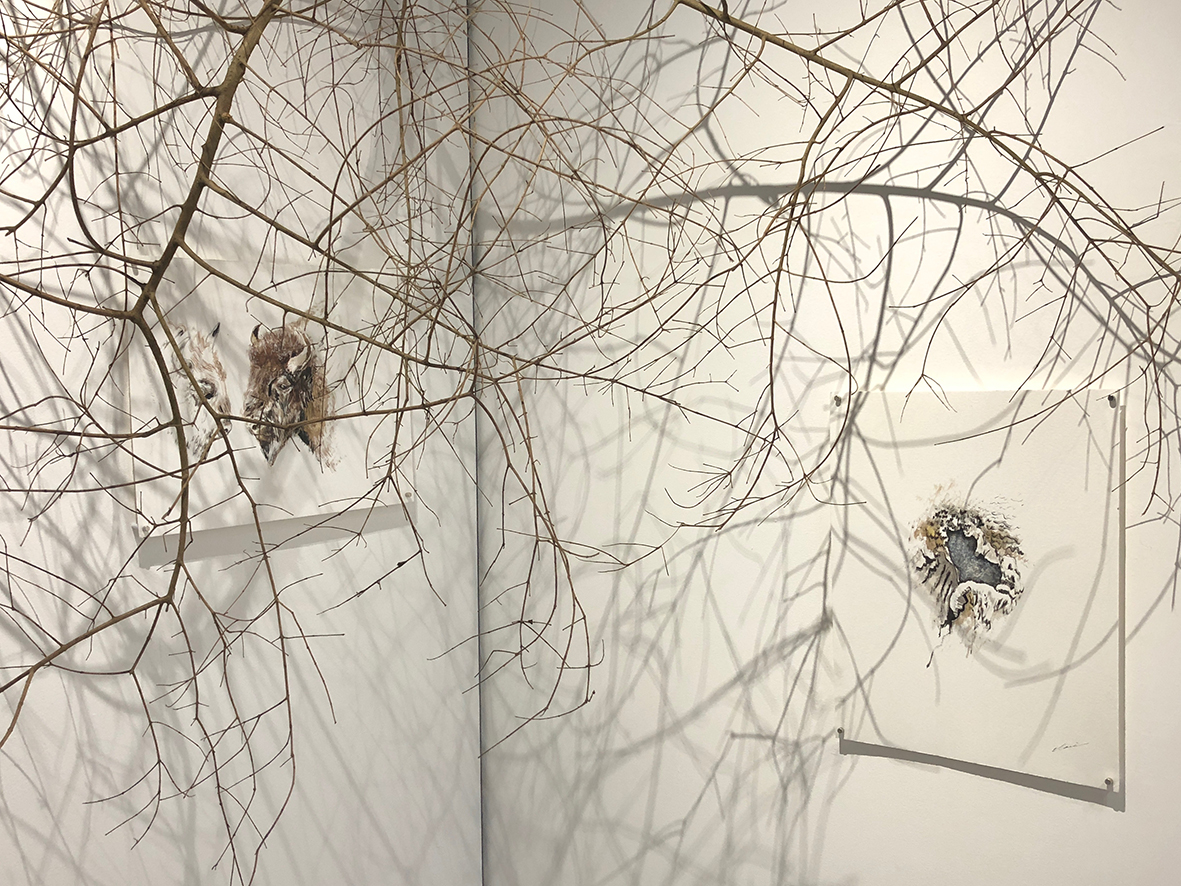 Claire Lee’s new series, which she started in early 2016, pertains to the figure of the bison, a species on the brick of extinction. The artist doesn’t question the bison’s perception but rather follows an anthropomorphic approach, using the mighty but fragile body of the animal to reflect on our human condition.

The series needs to be contemplated as a whole, and the setting itself is part of the work. At the back of the gallery, sheets of poetry have been hung on the branches of trees, recalling shamanic prayer trees. Visitors can sit there and listen to the artist’s voice reading some of her poems. Most of the drawings are unframed, hung slightly away from the walls as if floating, or laid on rough wooden tables. The installation, in black, white and wood colours, creates an ethereal feeling and invites meditation.

Lee’s drawings constantly play with the juxtaposition of calmness and sorrow, violence and healing, as she grabs the ephemeral and flickering poetry of life on the eve of its collapse. They are deeply rooted in the soil, made from bitumen patches and brown hues on paper.

Her backgrounds seem to emerge from a burning process, which would metaphorically serve as a backdrop for the ongoing violence she feels is spreading over the world. Some of the charcoal and ink drawings are made on a raw beige paper wrinkled by the artist. This process gives depth to the works while hinting at prehistoric cave paintings.

The starting point of the series is the study of the bison’s eye, which Lee has sketched from different perspectives and isolated from the animal’s face and body. Some look like matrixes or origins of life, with one long eye seeming to give birth to another small animal.

Then come portraits of the animal in rapid inkbrush strokes, a condensation of energy and passion. Projecting her own feelings onto the bison, the artist gives them human expressions. She captures the intimate moments of fragility and compassion that we usually tend to hide. Could even a bison – symbol of strength and virility – cry? In the series Tears of Fear, the bison’s eye is not only crying, but also looks back at us in a mirror game.

How would a bison look at us? The bison, here, remains silent, accepting its death. The peacefulness of the works stems from its acceptance of its fate. Will we also contemplate our own self-destruction with tears in our eyes and poetry in our hearts? Lee’s awakening is her faith in overcoming death and pain: “There is another world behind the sky,” she says in one of her poems.

As the series continues, the drawings become more abstract and almost mystical. Progressively, the ink and bitumen patches absorb the figure of the bison, which melts into a cosmos-like background image. In the final work of the series, framed in a light box, a line has been cut within the sky, then sewn up and cut again, leaving a long scar lined up with pieces of white thread that resemble a flight of birds.

The series begins and ends with unknown holes, dark and infinite bison’s pupils on one hand and open scars on the other. Lee wanders in between, between dark and light, animality and humanity, soil and sky, vulnerability and violence.