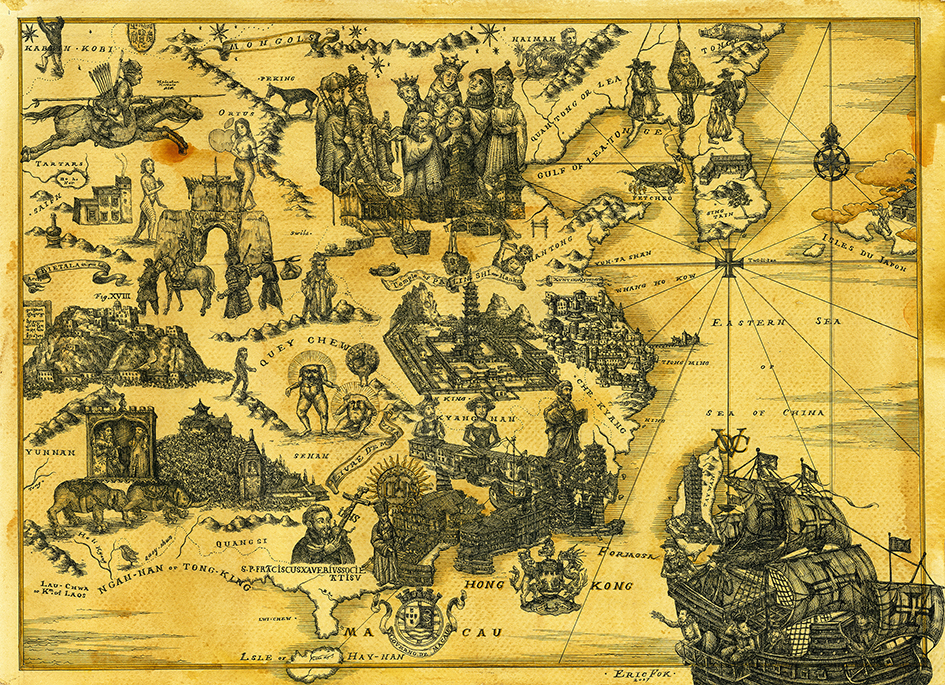 During the Age of Exploration, European men set sail to distant lands in the Americas, Africa and Asia to expand their empires. The treacherous journey to conquer new territories accelerated the development of cartography and mapmaking. Such maps have been an instrumental part in the history of colonialism; they depict boundaries and are expressions of power that reveal the geopolitical dynamics of a region. In this exhibition, Macau-born artist Eric Fok uses the rhetoric of the Age of Exploration in his intricate map-like works to explore the postcolonial condition of cities in Asia. He combines the imagined with the real, as well as history with modernity.

The exhibition is reminiscent of a maritime museum showcasing historical artefacts. The meticulously hand-drawn illustrated maps are framed and hung on the walls of the gallery, dimly lit by the warm yellow light that floods the space. At the far end of the gallery is a wooden briefcase displaying one of the artist’s works. Despite the vintage look of these so-called maps, created with ink on tea-dyed paper, the subject matter features modern elements such as skyscrapers, cars and aerial views of highways. Not only does the artist illustrate landmarks in formerly colonial Asian cities like Hong Kong and Macao; he also portrays European landscapes and figures.

Ever since the voyages of the Age of Exploration, interactions between nations have set off waves of migration. Several of Fok’s illustrations in the exhibition allude to Noah’s Ark, with animals of all sorts roaming the city streets, and some on boats as if they are migrating elsewhere. The phenomenon of migration parallels the uncertainty brought by changes of sovereignty. The titles of each of Fok’s works in the exhibition all point towards the expiry date of Hong Kong’s One Country, Two Systems, due to run until 2047, 50 years after the city’s handover from the UK to China. The former British colony has been experiencing anxiety over its identity and future. Much like the animals in Fok’s maps, both the Hong Kong diaspora and local citizens are seeking their place and direction in the postcolonial context.

We now live in the Age of Globalisation. As intercultural communication becomes
frequent, much like the time when trade flourished during the Age of Exploration, Fok’s maps resonate with our experience of living in an Asian city. By placing eastern and western elements in the same pictorial frame, the boundaries become blurred. The artist’s work destabilises our perception of the scientific authority of cartography and exposes the fragile nature of marking territories.