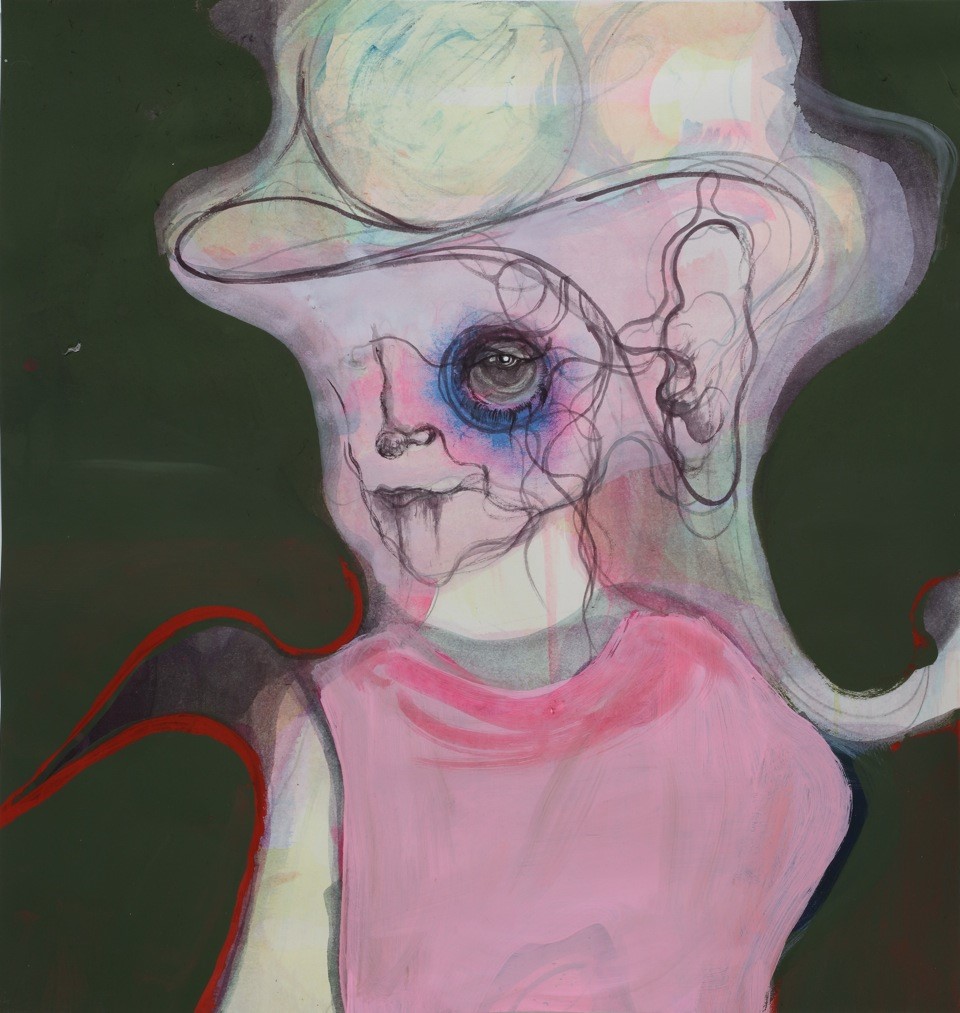 During the Ottoman invasion of Wallachia in 1462, Sultan Mehmed II, who had marched into the territory with an army of more than 150,000 troops, entered the small town of Târgoviște in what is today Romania to find a forest of 20,000 Turkish men, women and children, all impaled. The perpetrator: Voivode Vlad III Dracula. The carnage earned the ruler the moniker Vlad “Tepes”, or the Impaler, among the local population. A little further afield in England, his numerous acts of heinous cruelty, and his patronymic, would inspire the creation of Irish writer Bram Stoker’s 1897 novel Dracula. They also sowed the seeds of inspiration for the work of identical twin brothers and artistic collaborators Gert and Uwe Tobias.

Born in Transylvania, Romania to a Saxon family, the artists explore their cultural identity through mythology in their woodblock print paintings, ceramic sculptures, typewriter drawings and watercolours. Having spent their childhood under Nicolae Ceaușescu’s rule, the myths and misconceptions of Vlad Dracul, as he is known in Romania, did not initially colour their youth. There he was a historical figure, a hero, a warlord ruler who staved off the Ottoman threat and defended Christendom, albeit with an iron fist.

It was only after years in Western Europe, having migrated to Cologne, Germany in 1985, just four years before the iron curtain of communism was ripped down, that they found out about the well-known vampiric Dracula mythology of Hollywood, which trickled into their work. “We played with this cliche about the land behind the mountains, Transylvania,” they say. “We combined the titles of Dracula B-movies with the iconography of folklore. These were our first large-format woodcuts.”

Studying fine art under the German artist Walter Dahn, a member of the rebellious 1980s artist group the Neue Wilde (“Wild Youth”), the Tobiases worked individually until graduating in 2002 from the Hochschule für Bildende Künste in Braunschweig. After a joint project, say the brothers, “We realised that in cooperation we could allow for things that we would not allow ourselves alone. The added value is that from the dialogue between the two positions, a third emerges.”

Today, like characters out of a Brothers Grimm fairy tale, they work and live together in their Cologne studio, a former potato factory. Each woodblock painting is first worked on by one brother individually, with the other subsequently brought in to add to it. When a piece is completed the brothers both sign it with their initials, GUT, which also means “good” in German, signing off on what the other did. It’s never clear to the viewer where the work of one ends and the other begins. “A certain amount of space is of course necessary to leave oneself and the others behind,” they say. “It is important that each individual sees himself in his work.”

The brothers have revived and breathed new life into the large-scale woodcut as a form. Working with a collage system, they draw inspiration from a diversity of materials. “All our work is based on the principle of collage,” says Uwe. “It starts with the fact that Gert and I work together. Our influences come from different directions, for example arts and crafts or art history or magazines. All these influences are transformed into our imagery.”

Surreal portraits of ghoulish long-necked figures with stylised hair and large, elfin ears and faces look as if they have been hacked together from different images from Nosferatu or a Fritz Lang film, or from movie posters. The brothers’ large woodcuts and wall paintings are littered with art-historical references to Max Ernst, German Expressionism, Russian Constructivism and Bauhaus.

Accommodating the smaller spaces of Hong Kong homes, a number of the woodcut prints are scaled down to portrait size for would-be local collectors, all executed in a palette of subdued sherbets and grisaille. This is a departure from the brothers’ darker, bolder graphic works, but the prints still bear the floral and animal motifs that occur throughout their body of work, and a recurring cast of characters from their self-created world that is dark, quirky and humorous.

The prints, all untitled and executed in 2017, marry beauty with horror. In one, a teal-coloured sleeping femme fatale is watched over by an owl, while another with a carnivalesque, mask-like face, reminiscent of James Ensor’s deathly figures, is visited as if in a haunting nightmare by a surreal moth-like creature and a bird sprouting a bloom from its head. The figures, in their shades of grey and blue, and reversal of dark and light, resemble photographic negatives.

Although neither brother has ever visited Hong Kong, they drew from the region for inspiration, adding here and there a phoenix, an Asian floral motif (perhaps a bauhinia) or a hairstyle adorned with hairpins suggestive of the Tang dynasty. Contrasted with these motifs is a layer of geometric grids, which draw on modernist geometric abstraction. These make up the background of the larger woodblock prints, lending them visual depth and spatial fragmentation. The woodcuts have a rough-hewn, handcrafted finish and are all hand-printed­, with uneven textures and outlines reminiscent of folk art. But unlike traditional woodblock prints, the brothers only produce two of each printed canvas, slightly different from each other. The prints are composed almost like puzzles, with layer on layer of shape, texture and colour, a juxtaposition of the handcrafted and the industrial.

Combining line, shape and colour with fairy tales, the prints are at once exotic and folkloric, naive and modern. Like the mythology that inspires them, which blends fiction and historical fact, the Tobiases’ work is a hybrid. Stitched together from diverse influences, they create an altogether new, fantastical world.