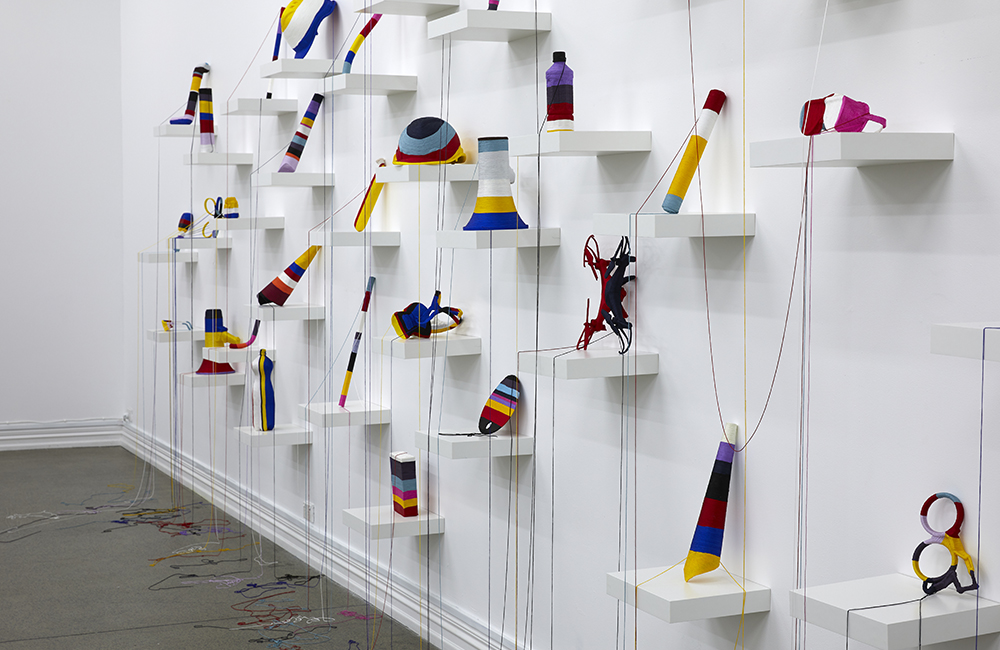 Hong Kong-based artist Yuk King Tan’s Crisis of the Ordinary is an exhibition that deftly weaves together symbols of omnipresent political power and contemporary protest culture. Her first show in New Zealand in many years, Crisis of the Ordinary comes at a moment in both New Zealand and Hong Kong society when notions of national identity, civil liberties and colonial legacies have become flashpoints for opposing groups.

On entering the gallery, visitors pass by Eternity Screens, a delicate partition of latticework that signals a subtle transition into a space where meaning forms part of a global economy of exchange. Eternity Screens reveals itself to be comprised of military-grade zip-tie handcuffs, a subtle sleight of hand that sets the tone for the rest of the exhibition, where seductive forms belie social and geopolitical tensions.

Arranged on one wall are an array of brightly banded objects excavated from protest sites in Hong Kong, Korea and New Zealand. Battered water bottles, discarded sunglasses and other ephemera sit on small displayshelves alongside tools of urban protest such as safety helmets, a drone, a snorkel and a megaphone. Each item has been tightly wrapped in brightly saturated thread that pools on the ground, a sort of mummification that both conceals their functions and renders them inert. But Tan’s collecting has less to do with the preservation of relics than the alchemical process of transmutation. She demonstrates how everyday objects, bound in deeply saturated hues reminiscent of countries’ flags, can be transformed into nationalistic icons through grassroots movements and ingenuity.

The title of the show brings to mind the mundane, the habitual, even the banal, yet Tan’s work suggests how these sites foreground conflict and the struggle for power in disconcerting ways. Bridges, a video work that documents a quiet moment, shows protesters simply milling around. Over the course of 20 minutes, civilians and police officers come and go, umbrellas unfurl, front lines are strategically placed. Private negotiations are transacted. The scene is bustling yet orderly, like a market gearing up for a brisk day’s trade. It’s a far cry from the violent, gritty scenes that have become fixtures of international reportage. Rather, the work presents itself as an interregnum, a moment of calm between two distinct periods of power, if only metaphorically. In this quietude we begin to see emerge an ordinariness where the everyday is profoundly political.

Tan’s work reminds us that the everyday is a space continually acted on by global and capital relations. The ordinary might seem inconsequential but it is embedded with discriminatory practices – racism, sexism, intolerance – that reinforce institutional and authoritarian structures. The crisis that the artist seems to be referring to is not an endpoint but a moment in an ongoing cycle of progress and change.

There’s a faintly optimistic slant to the exhibition, although the artist refrains from stating her position too openly, which is perhaps why it doesn’t entirely connect. New Zealanders might find solace in a show that attempts to draw together the wider Asia-Pacific region through a shared struggle for self-determination, but the cleanly analytical approach keeps the audience at a distance. This is a shame, as there is so much about this show that is worth shouting about.