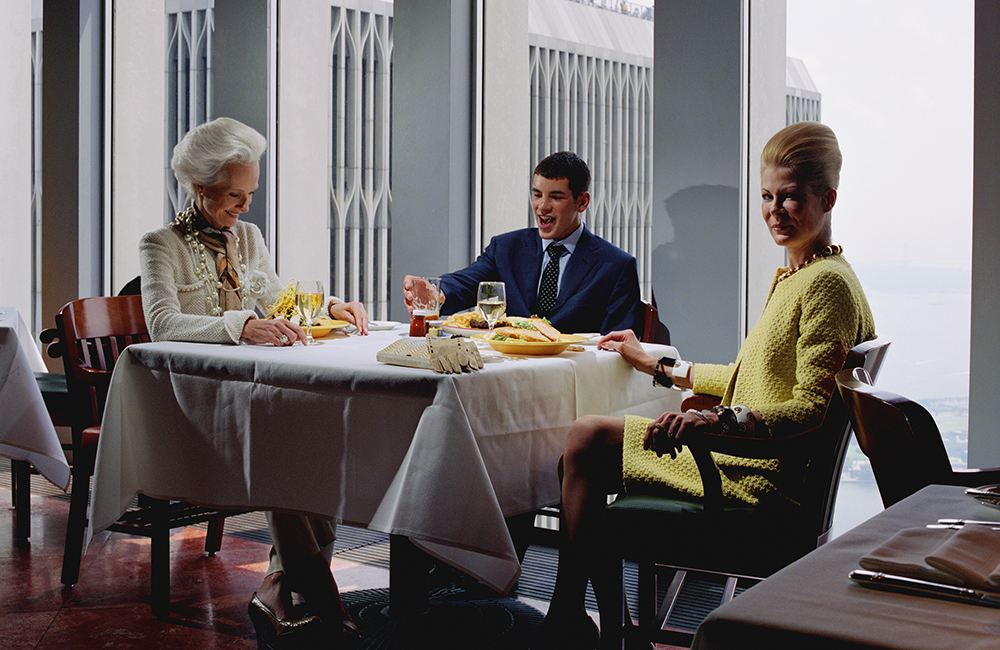 Moments of Influence / By Christina Ko /

The American photographer is the subject of David Zwirner Hong Kong’s latest show, a retrospective that features key pieces from each stage of his career: early, staged photographs set up to resemble reportage; the more glamorous yet highly narrative images he shot for magazines such as W; and excerpts from his acclaimed series Hustlers (1990-92), in which he paid male sex workers their usual session rate for the privilege of photographing them in situations that seem everyday. While many of these images fairly obviously hail from another era, their influence hasn’t dimmed since they were created in the 1980s and 90s.

“A lot of people were very excited, sometimes even emotional [when they heard about this show] – because this is like flipping through a textbook, but it’s the real prints,” says Leo Xu, the gallery’s director. “The community knows him; artists love his work. I’ve met a lot of young people – artists, curators, critics – who grew up with his work, with the MoMA book [the retrospective Philip-Lorca diCorcia (1995)], with the Hustlers book, with a lot of those books in their collection. And it’s a pretty rare and precious occasion to see all the works together under one roof.”

Xu is speaking about others but also himself. The gallerist, curator and writer was also at one point a photographer, and understands the gravity of diCorcia’s work from an artist’s perspective. “In China and Taiwan people are more interested in documentary photography, street photography – playing a lot with decisive moments,” he says.

“When we saw [diCorcia’s] work, it was enlightening. We thought, ‘Oh my God, you can manage lighting like this. You can take a picture that looks almost staged, but which is not.’”

He’s referring to Heads (1999), a series that diCorcia created by setting up innocuous studio lighting on the street, capturing bystanders as they strolled by. The woman in a yellow hat is one of the most iconic examples in this collection, but all of them are dramatically framed and sensuously lit.

Even more impactful on future generations were diCorcia’s staged candids, which he began executing in the 80s, using friends and family members as subjects in seemingly everyday situations.

“He’s one of the very foremost artists who liberated the photography practice,” says Xu. “People had this firm belief that street photography has to be spontaneous, it has to be candid, but then in the late 80s and early 90s, a new generation – like Cindy Sherman, like Jeff Wall – they found a new language, a new path with photography. They wanted to stage, they were deeply inspired by theatre and cinema, but with a lot of theory. I feel [diCorcia] emerged with the capability of merging two camps, the candid shots and the highly conceptual, staged pictures.

“So in his early body of work – the pictures he produced, mostly in his house, in the late 80s, and the Hustlers project he staged and photographed in Santa Monica – they’re very human and carry an air of reportage photography, of photojournalism. But at its core, everything is deeply planned and carefully staged, and you can see how he manipulates light, and I feel that had a big impact on a few generations to come. If you look at Jeff Wall, it’s very much about diving deep into art history and translating one picture to another. Cindy Sherman plays a lot with déjà vu, between Hollywood pictures and similar compositions. But [these artists] are not immediately confronting themselves with everyday life. So the whole idea of [fine-art photography] being everyday has so much to do with diCorcia.”

Many of today’s celebrated western photographers openly cite diCorcia as an influence, such as art-world darling Alex Prager, whose crowd scenes are staged to carry an air of the synthetic but also an element of the organic; and who, like diCorcia, dabbles in the world of editorial, crossing back and forth between commercial and fine art, and cross-pollinating as she goes.

From Asia, Xu counts artists such as Chen Wei and Pixy Liao among those who’ve drunk the diCorcia Kool-Aid. “The way [diCorcia] managed those sitters, those styles, it’s so impeccable; it’s too good to be true,” says Xu. “That has been inherited by a lot of young photographers, especially in Asia.”

A Chinese artist who dabbled in sound before experimenting with photography and other media, Chen also stages his set-ups, including his famed series of nightclub scenes showing how China’s youth uses hedonism as a surrogate for dreams unattained – in fact, he asks his actors to strive for fakeness. Liao, on the other hand, is best known for her Experimental Relationship project (2007-), in which she creates portraits showcasing herself and her Japanese boyfriend in situations atypical for heterosexual couples that question the boundaries of relationships – a project whose purpose is not, she says, documentation. Though these photos are a world away in terms of style and substance, they too use the human body as a prop, and also recall the bold subject matter of Hustlers, which was created by diCorcia using the same staged mechanisms in the early 90s.

The David Zwirner show contains a few pieces from his editorials for W, but lacks his commercial work for clients ranging from Fendi and Bottega Veneta to South Korean department store Shinsegae, which would have showcased his other vein of influence, on the fashion world. “He transformed people’s vision in the fashion business, so when the show was announced, I got the most interest, buzz and conversation from people working in fashion and publishing,” says Xu. “At that time people were trying to push forward the photographic vocabulary, like what else can you do if you’re doing a product picture, if you’re doing an Ikea campaign? Remember those amazing photo series that Benneton did for their campaigns and Diesel did once in a while – very human photo campaigns – [diCorcia] was ahead of those alternative pictures; he was the foremost pioneer to experiment with a new methodology.”

DiCorcia’s work also has powerful resonances for Xu himself, dating back to 2009, eight years before he shuttered his own gallery to join David Zwirner as its Hong Kong gallery director. “It was my frist time in New York visiting David Zwirner,” he says. “DiCorcia’s Thousand [a series of 1,000 Polaroids displayed in a single row across the length of the gallery] was being shown. This exhibition didn’t simply change my perspective in terms of style of photography; it changed how I thought about present-day exhibitions and curation.”