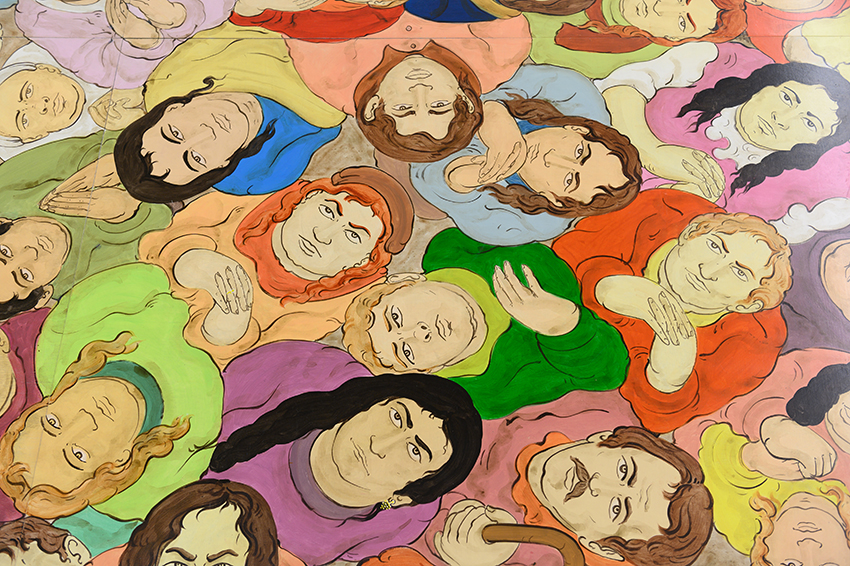 Tucked away among industrial buildings in Tsuen Wan is the Centre for Heritage Arts and Textile (CHAT). Located at The Mills, a former textile factory which has witnessed the development of Hong Kong throughout recent decades, the centre historicises the role of fabrics and textiles through its programmes. At Gathering Delights, a solo exhibition by Indian artist N S Harsha, curated by CHAT co-director Takahashi Mizuki, visitors are greeted with almost 200 sewing machines lined up along the corridors surrounding the second-floor atrium. On each machine of the installation Nations (2007-19) is a flag of a different country in the United Nations; threads in colours including red, blue, orange and green are woven in all directions over the supporting metal structures, signifying
the interdependent nature of international diplomacy.

The Mysuru-based artist’s paintings and sculptures examine the geopolitical order of countries such as India, delving into labour practices while highlighting traditional culture. Inside the main exhibition area, an acrylic-on-canvas triptych, which shares its name with the installation, echoes the subject-matter in two-dimensional form. Sewing machines with colourful national flags form neat rows and fill the canvas in the middle, whereas the two canvases on the side depict the same arrangement but with certain flags and machines missing. The portrayal of the disintegration of a global platform in this era of complex political conflicts shows the vulnerability of collectively held ideals, which depend on nations’ participation.

Also part of the exhibition is mixed-media work that juxtaposes quotidian and celestial symbols. In Ascent or Descent to Reality (2019), the artist places a horizontal golden bamboo ladder between vertical strips of black cloth. Wooden clips hold the suspended cloth from above and planet motifs adorn the surface of the cloth. In another section of the gallery, Gathering is Evil (2007) mixes calligraphic forms with etched bronze plate on wood. An abstract, seated, skeletal figure rests among chair symbols; the closer the chairs are to the figure, the more disoriented they are. Perhaps this is the visualisation of the absurdity and the destructive influence on the public of collective rationales.

The highlight of the show is immersive installation Star Gazers (2010/19), which prompts visitors to reflect upon the notion of community literally and metaphorically. Upon stepping into an area where the floor is covered entirely with patterns composed of a crowd looking upwards, viewers find themselves among the group of people when they look at a mirrored reflection above.

In a world where sociopolitical factors shape national boundaries and determine how populations connect collectively, the exhibition is a timely exploration of our place in the world and the universe.