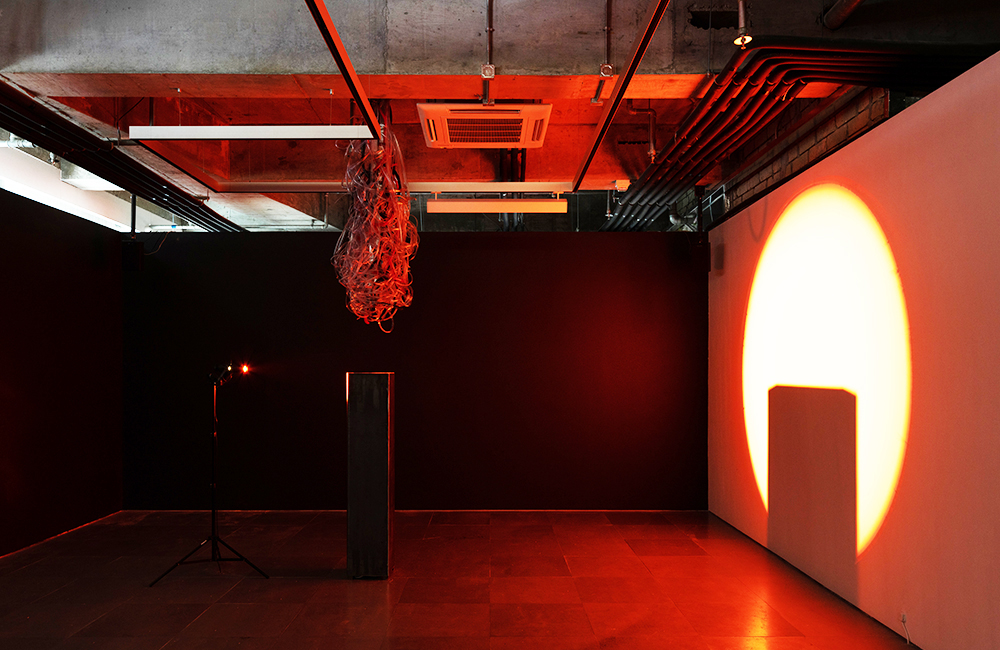 The Life of an Image / By Ysabelle Cheung /

“I’m trying to make poetry, not a film,” Ellen Pau said to me, somewhat enigmatically, during the opening hour of her latest solo show. For the previous 20 minutes she had been describing, in elliptical phrases and brief anecdotal vignettes, the processes of her three-decade investigations into varied media. Yet walking around the darkened, hermetic space of Edouard Malingue Gallery, which featured early and new works clustered around the restaged focal piece Great Movement (1996/2019), I found I had more questions. The slow, creeping organ notes emanating from the speakers: had I heard them before? Where were the faceless figures that were being shown on the thermal video screen? And what was that unidentifiable aroma permeating the room?

Pau’s work and practice have always been somewhat ambiguous, but she places the responsibility on the viewer to understand the implications of this ambiguity. In most if not all of her works, there are layered, buried double meanings, framed by her explorations into metaphors around the body and technology and, more recently, our psychological, emotional responses to environment and society.

When Great Movement was first shown in 1996 at the now defunct Agfa Gallery at Goethe-Institut Hong Kong, Pau introduced it with a printed quote by philosopher Julia Kristeva: “I expel myself. I spit myself out. I abject myself with the same motion through which I claim to establish myself.” In that year—the last before the Hong Kong handover—the installation was shown in a small hallway, with an entrance arch framing the large-scale vertical projection of the artist’s palm, which features a spot roughly the size of a football puncturing its centre. This circular design, black on one side and red on the other, suggests a portal of some kind, or an unknown transition occurring within her—or the viewer’s—body. On the opening night, December 4, she invited choreographer Dick Wong to stage a performance in dialogue with her piece. Writing in the South China Morning Post, the late critic Hiram To mentioned that Wong “swirled like a skater on thin ice and slowly collapsed on the floor”, adding to the overall message about the precarity of the human form. In the context of 1996 and Pau’s deep connection with her home city of Hong Kong, however, the work was also seen as a response to identity anxieties around the impending transfer of sovereignty, as well as the biological trauma of detaching oneself from and reconnecting oneself to a foreign body.

In 2019, she again referenced Kristeva in a small introductory wall text: “Abjection is above all ambiguity. Because, while releasing a hold, it does not radically cut off the subject from what threatens it—on the contrary it acknowledges it to be in perpetual danger.” Reading this, it became even harder to ignore certain controlled elements that permeated the gallery. The lingering scent, which was listed simply as a “faint smell” in the press release, appeared both floral and menacing in its vagueness—and to outside observers of Hong Kong might remain simply a strange olfactory experience. But to local visitors it was reminiscent of the artificial perfume that pervades Hong Kong’s shopping malls or the tiny, fragrant white flowers that often perfume the dashboards of the city’s taxi drivers. There was another local memory here too. Occasionally the smell warped, becoming acrid and bitter, and one caught a whiff of something toxic. The scent kept returning, much like the tear gas that has pervaded the streets since anti-extradition bill protests began in June.

VIDEO IS A MIRROR

It is almost impossible to extricate Pau’s work from the history of Hong Kong. The daughter of two medical workers, Pau was born in the early 1960s—a decade that would bring great economic prosperity due to the popularity of Hong Kong-made products for export, and also great sociopolitical unrest, as pro-communist leftists, railing against British colonial rule, organised strikes, demonstrations and riots across the city in 1967. By the time Pau made her first Super 8 film, Glove, in 1984, the unresolved instability and tension that shrouded the city had amplified considerably, fuelled by Deng Xiaoping’s “one country, two systems” policy and the looming handover, which had been announced and signed in December. In the ensuing years, Pau—also working as a radiologist at Queen Mary Hospital—created short videos that explored themes of transition, anxiety and speculation around the post-colonial body in the lead-up to 1997. In the best-known and most explicit of these, Pledge: Bik Lai Chu (1997), we see her frustratedly banging her head against a wall as a response to governmental failures. In other works, we see similar themes of mild trauma. For example, in Drained II (1989), we see a female performer repetitively falling on a stage, and another walking and disappearing behind a black curtain; occasionally the image glitches and the woman freezes or regresses. Conversely, Diversion (1990) emphasises the unease of collective change and shifting ground: we see contestants in the cross-harbour swimming contest jump into the water, spliced with videos of people falling onto a stone-cobbled floor. Scenes switch awkwardly from land to sky to sea as we glimpse the heads and feet of people falling, swimming and jumping, the boundaries between landscapes bleeding into one another.

The transgressive editing and visual language of these early videos reveal a performative sensibility, and directly relate to her work documenting the performances and workshops of experimental theatre company Zuni Icosahedron, founded by Danny Yung. At the time, she was also exposed to other anti-commercial aesthetics, such as European New Wave Cinema and the work of emerging new-media artists such as May Fung, Comyn Mo and Wong Chi Fai, with whom she set up Videotage in 1986. But it was Yung’s philosophy of deconstructing tradition and merging disciplines that would become the single most dominant influence in her work. Through Zuni she collaborated with various artists and performers, and cultivated a lifelong interest in holistic communication and dialogue, which she would pursue as a curator and organiser from the early 2000s onwards.

In 1996, Pau was invited by Yung to participate in Video Circle, a multi-year project which she describes as a turning point in her career. For this, she and 31 other artists provided short films that were screened on large television monitors installed in a circular pattern. With the screens facing inwards, the visitor had to step inside this circle to view the 32 short films, which played on their individual screens in a consecutive sequence, one by one. In 1996, this treatment of video was seen as radical—especially in hyper-commericalised Hong Kong—and the chunky black monitors appear almost sculptural, generations away from the sleek flat screens of today that mask their complex inner workings. In a column for ArtAsiaPacific magazine, Pau described her thoughts during those years: “The moving-image medium itself is fascinating to me. The still frames of video are in fact not still at all. Video is not only a screen; it is also a black box, with an input and an output. A video is a mirror that allows you to look at yourself, but it is also an electronic stage for creating new life, time and space.”

THE MEMORY OF THE SCREEN

Just as she directs the performative body in her earliest videos, in her latest works Pau orchestrates the alchemical transformation of certain materials. At Edouard Malingue, she showed two sophisticated new installations whose central components are heat, air, light and water. For The Spectre of the Will (2019), she installed a heated wall in the gallery, placing upon its surface a thin layer of red wax. Over time, the wax melts and drips, forming stalactites which then crack and fall to the floor. Next to this is thermal video footage of viewers looking at this wall. Unlike most surveillance cameras, however, the lens is situated not on top of the screen but off to the side, so that someone looking at the work appears to be looking at a stranger rather than a reflection of themselves. There are two possible interpretations here—one references the tensions in our uneasy relationship with technology and hyper-advanced surveillance, the other our enduring desire for human warmth and contact, even and perhaps especially in the company of strangers, such as those in a large crowd or protest.

The nearby sister work, The Spectre of the Real (2019), features a tangle of plastic tubes from which water and air steadily drip, hitting a hot plate and releasing audible steam. An orange light casts shadows of the steam onto a nearby wall, the overall effect similar to smoke in sunlight—or teargas at sunset. She mentioned that The Spectre of the Real was an indirect comment on the multitude of images and videos of people caught in political violence that she receives on her phone daily, “some of people who have already died or are about to die”. The work features music from an alleged manuscript hidden in Leonardo da Vinci’s The Last Supper, which is cut short again and again as the water hits the plate, the steam thus becoming the overwhelming sound. The overall effect is similar to a constant stream of message notifications interrupting one’s day or work, and Pau says that the work is largely about “the sound of the real and the sound of the unreal”—the real being the hiss of the steam and the constant reminder of mortality, the unreal being the ominous, dramatic music churning out of the speakers.

As life and technology evolve, so does Pau—and as Hong Kong changes, so does she. In these recent installations, the artist has revealed only the most minimal of components, leaving us with just the memory of a screen or the faintest trace of technological or theatrical process. Her work has never been more sensitive, ambiguous or open-ended. Unlike in her earliest video works, which were confined to a beginning and an end by their runtime, these installations are infinite and subject to change depending on context and environment—in some sense we can consider them living beings, capable of dialogue and susceptible to our emotions. Each has its own life. And as Pau said to me early in our discussion: “What is the life of an image—and conversely, what is its death?”