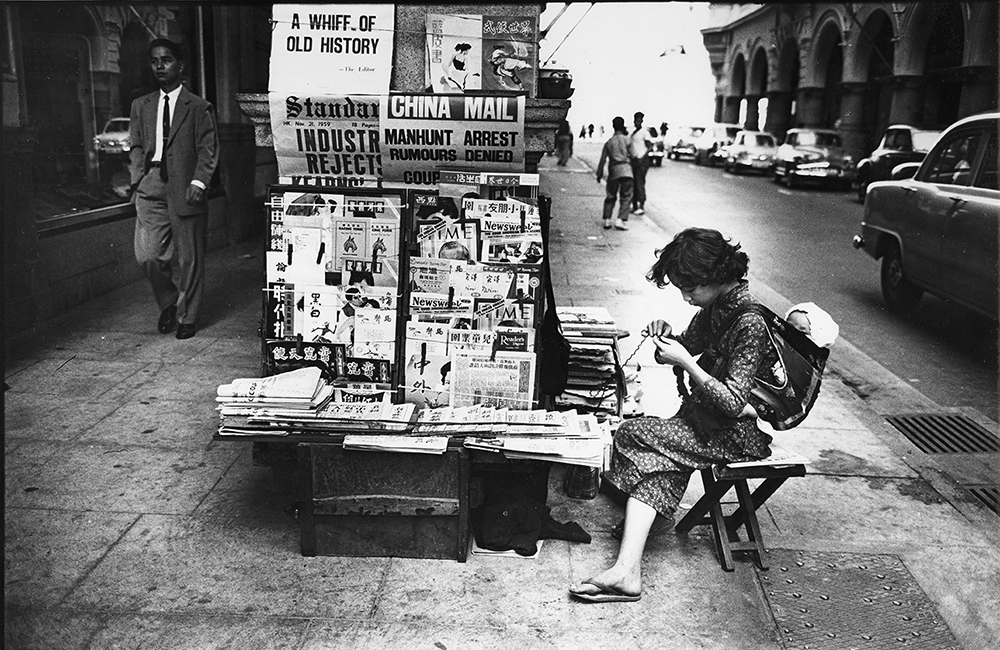 Hong Kong the Way It Was / By Christina Ko /

As the city’s future hangs in the balance, historically and technically fascinating photos taken by Ed van der Elsken in 1959-60 transport viewers to Hong Kong’s past.

The subject of F11 Foto Museum’s fifth-anniversary exhibition, Dutch photographer Ed van der Elsken’s photos of Hong Kong taken around 1959-60, has by coincidence or fate been tied to several important dates in the city’s democratic history.

Hong Kong the Way It Was showcases familiar Hong Kong scenes through warm yet unfamiliar eyes. Van der Elsken was on a 13-month tour of the world when he stopped in the colony for three weeks, falling for this “prettiest of harbour cities”, as he termed it, though he showed but a few of the photographs publicly for almost three decades.

In 1989, spurred by the events of Tiananmen Square, he dug up the film negatives – which had never been printed – and disappeared into his darkroom for over a month, despite having been diagnosed with a terminal disease the year before.

Van der Elsken, whose photos are part of major public and private collections around the world, died the following year; we do not know if it was by design or not that the compilation of his Hong Kong images was released in book form in 1997, the year of the city’s handover.

We do, however, know that the F11’s founder and the current owner of the photos, Douglas So, could not have predicted Hong Kong’s political tumult when he purchased the collection five years ago, around the time F11 was established. Nor could he have known it when he decided to put this exhibition together a year ago.

“[Though] we were unable to foresee the current events, as we curated the show we became aware that even 60 years ago, Hong Kong faced many issues we are facing today, including poverty, identity and overcrowded living conditions,” says So. “We have discovered that both locals and foreigners are equally interested in the exhibition. The current social climate has made it more difficult to visit museums, but we are confident that the exhibition will continue to attract visitors to see Ed’s Hong Kong – the first time such prints, made by the photographer himself a year before his passing, have ever been shown anywhere in the world as a complete set.”

They feature tropes that have become iconic for Hong Kong, including the silhouette of a junk boat – now the logo for Hong Kong’s tourism board – a tram and a street-side newsstand, although the one in Van der Elsken’s work is manned by a young woman in a tea-length dress with a baby strapped to her back. Other pictures capture the idiosyncrasies of the era, like a pair of young children toting buckets of water, a suited expat travelling by rickshaw or a worker balancing dozens of teapots on two ends of a bamboo pole over his shoulder.

All of these images are rendered in Van der Elsken’s signature gritty, paradoxically romantic black-and-white style. He was not purely a point-and-capture man – he interacted with his subjects, even occasionally aggravating them, such as when he photographed the legs of seated women in short dresses at the races, the tops of their pantyhose peeking from the side slits of their fitted skirts. A policeman who sought to stop him became an unwitting subject, too.

“Technically speaking, Ed was not the photographer who waited for the perfect moment to appear; [he was one] who initiated it,” says So. “He was not a photojournalist but a passionate photographer who captured his favourite subjects, such as ladies in cheongsams, rickshaw pullers and strange colonial architecture. Through his lens, we see a Hong Kong without cosmetics, with the daily lives and struggles of ordinary people. This collection embodies precious memories of Hong Kong during an era of enormous social change.”

So’s own favourite photo is one of Blake’s Pier, a perfect example of a shot that juxtaposes then and now in the viewer’s imagination, and one likely to elicit an emotional reaction for people familiar with its current incarnation. “This is one of my favourite images because the over-a-century-old structure was iconic and full of history, which also caught the eye of Ed. Blake’s Pier is still with us now in Stanley, standing side by side with another historical building, Murray House, which was also preserved and relocated brick by brick,” he says.

In curating the collection, which is displayed over F11’s three floors, care and consideration have clearly been taken to create a journey that appeals to tourists, art aficionados and nostalgic locals alike. A splashy institutional show with a big-name artist this is not – instead, it features an emotionally engaging, historically fascinating oeuvre that sheds as much light on the photographer’s style as it does on the Hong Kong of the time.

Little touches loan the exhibition an intimacy rarely seen in museum shows (F11, a restored building in residential Happy Valley, isn’t exactly the expansive Hong Kong Museum of Art or M+, and nor is it trying to be). At the door, while buying tickets, visitors can pick up White Rabbit sweets, chosen because they’re local and were popular with children in the past. And next to certain photos are boxes mounted on the wall emitting the smells that made the Fragrant Harbour so very fragrant, such as salted fish or black-bean paste.

So has been careful to ensure the show also pays adequate homage to the man behind the lens. F11 found and purchased all remaining first-edition copies of Hong Kong in circulation and offered all but one of them for sale, at a loss – all of them, unsurprisingly, have been sold. The other copy is on display at the museum, and alongside it some photos are mounted back to front, so viewers can see instead the notes that the photographer made on the backs of his prints.

“Ed was one of the most influential photographers of the 20th century,” says So. “His publications, including Love on the Left Bank, Jazz and Sweet Life, are among the classics that influenced important photographers such as Araki, Nan Goldin and Tim Walker.”

On the top floor is an image of Van der Elsken, accompanied by the following quote, which in these trying times is sobering in its optimism: “Talking about change: let us hope that after 1997, the free people of Hong Kong will be of some influence in changing the rigidity of the colossus China that is going to swallow it. Who knows whether tiny Hong Kong, its people used to freedom, to individualism, will start an avalanche of liberalisation in the People’s Republic of China. Why not? In these last years of the 20th century, freedom is in the air!”