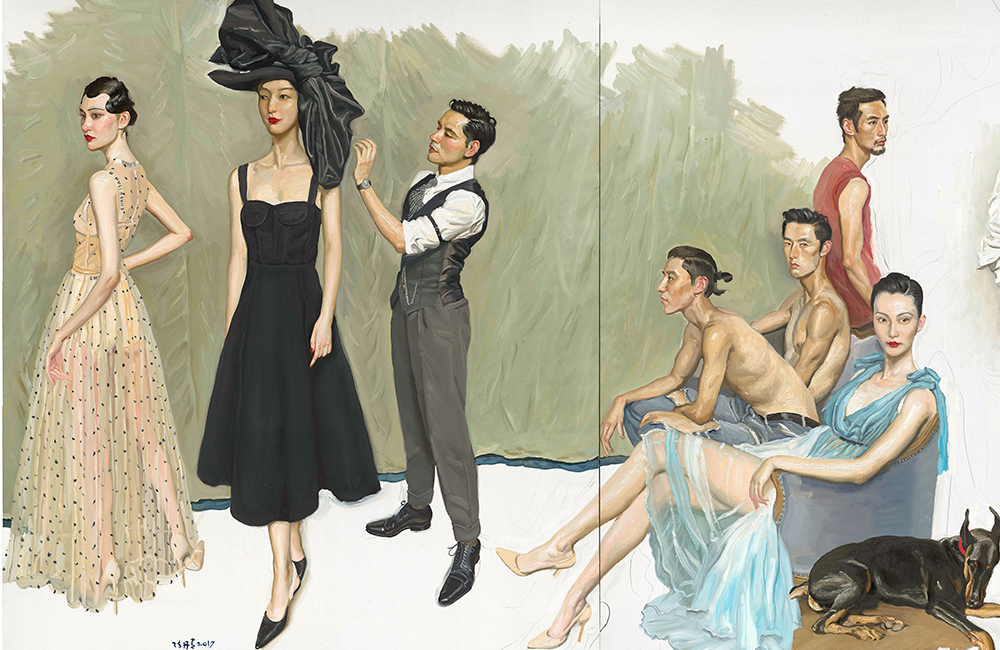 Shanghai-born artist Chen Danqing was only 14 when he started painting Mao propaganda posters in the 1970s. “I painted more than 100 portraits of Chairman Mao on the street walls in Shanghai and its suburbs and also on factory iron sheets,” he says. “During that time, there were millions of amateur and professional painters in China who painted millions of portraits of Mao Zedong.”

Sent to live in the countryside in Jiangxi province for five years as part of a nationwide programme of forced collectivisation during the Cultural Revolution, Chen painted what was prescribed in the socialist realist style. The posters were part of a progression in a career that would eventually earn him accolades as a painter in China.

After the Cultural Revolution he was admitted to the China Central Academy of Fine Arts, graduating in 1980 and staying on to teach until he moved to New York City a couple of years later. It was during this period that he painted his series of seven Tibetan paintings, which would bring him wider recognition but also earn him criticism back home, Tibet being a contentious topic in China. In the past the Beijing-based artist, a friend of outspoken artist and activist Ai Weiwei, has been outspoken about the Chinese state, criticising its educational system, but today he is more circumspect, offering no political insights into his work.

Inspired by French realist Jean-François Millet after seeing his works in 1978 at the National Art Museum of China, the artist set out to paint in the same manner. “At that time, I was in my 20s and I was just as arrogant as all young oil painters, trying to prove that they could paint like foreigners,” he says.

Millet painted the simplest moments: farmers resting, women breastfeeding, people harvesting and drying wheat, praying and sowing. “If you have seen revolutionary paintings made 50 years ago and paintings of farmers you would understand why I was attracted by Millet’s works – why I was drawn to the real moments and painted them,” says Chen. “His simplicity and richness attracted me.” In Chen’s paintings we see weather-ravaged people, dressed in traditional Tibetan attire, going about their daily lives on the land. Fleeting moments like a stolen kiss or a Tibetan girl tending to her yaks are captured in sombre, earthy colours.

His new series at Tang Contemporary, Chen Danqing: Disguise and Painting from Life, painted between 2014 and 2017, is a marked contrast to the Tibetan paintings. Here he depicts instead youthful, beautiful Chinese models, dressed in expensive-looking, colourful gowns and make-up, or ripped jeans and sweatshirts, an export of American pop culture and now ubiquitous the world over. The production of the series has more in common with an expensive luxury advertising campaign or fashion shoot than studio painting. Chen makes use of live fashion models for his paintings, sourced from the China Bentley Culture and Media Company, who are posed and dressed by a renowned stylist as if for a fashion photo shoot; he paints over many hours what is captured in moments in a photograph. Unlike in a posed fashion editorial, presenting the gloss and veneer of perfection, the models are captured during in-between moments behind the scenes: moments of repose, boredom, texting on their phones. Chen captures these moments much as he did in his Tibetan series, but they are idle moments in a contemporary culture obsessed with luxury. The subjects aren’t absorbed in daily toil, and their smooth, painted, unlined faces don’t reflect the hardship of an agrarian life. These figures are part of global capitalism, carefree, obsessed with luxury and beauty. The sitters are distracted by their phones, bored, disconnected, self-absorbed, as in Smartphones (2016), in which two young women sit almost back to back looking at their phones, barely acknowledging each other or the dog sitting between them.

There is a continued interesting juxtaposition and tension between the so-called east and west in Chen’s use of Chinese models with western-style figure painting. Some paintings, like Veil (2017), depicting a standing woman dressed in bridal attire, or Cigarette (2017), in which a young woman dressed lavishly in a long white gown and large black hat holds a cigarette, recall the portraiture of 19th- and 20th-century painter John Singer Sargent or photos by Irving Penn. In Artificial Flowers (2017), this juxtaposition of the east and western influences is most evident in the traditional Japanese attire of the seated women and the western attire of the standing man. The female figures are passively looking away from the viewer – much like traditional western figurative painting, in which the female sitter is objectified, intended for the enjoyment of a male viewer – while the male figure is standing above them and looking straight at the viewer.

The subjects in Chen’s latest series are as far removed as possible from the harsh realities of rural life of his Tibetan subjects, which Chen himself experienced during the Cultural Revolution. These paintings portray a new generation grown up with luxury brands, technology, western pop culture and competitive consumerism. It is a fitting reflection of the cultural and social shifts and economic development of contemporary capitalist China.