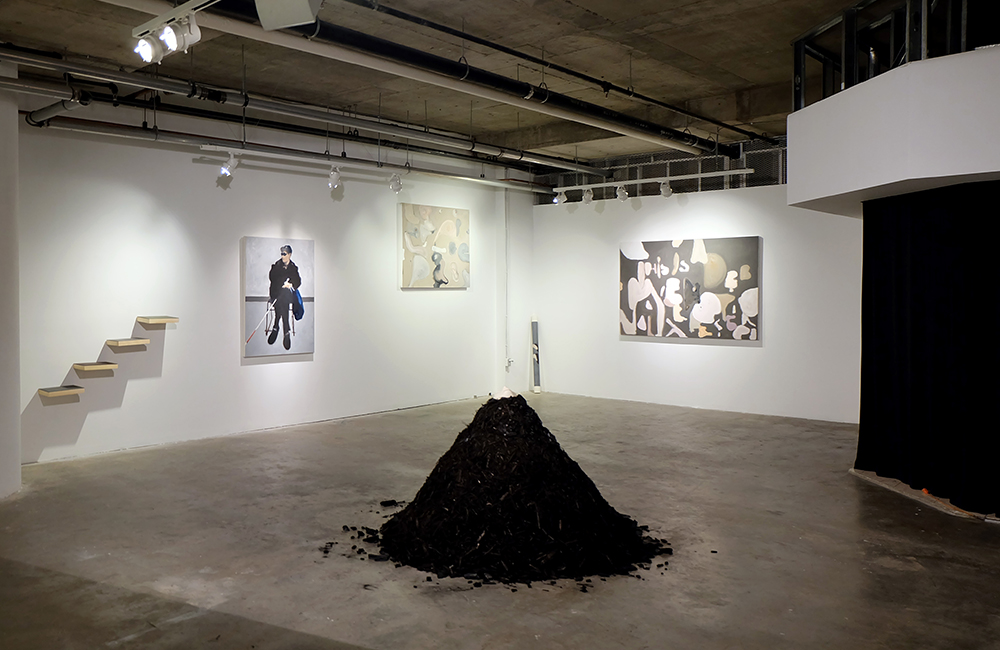 the world is as soft as a volcano: a moving composition / Centre A: Vancouver International Centre for Contemporary Asian Art / Jan 24 – Mar 14 / Elliat Albrecht /

At Centre A, a few blocks away from Vancouver’s Dr Sun Yat-Sen Classical Chinese Garden, where Lam Wong is currently artist-in-residence, is Wong’s solo show the world is as soft as a volcano: a moving composition, the artist’s most personal to date. Dealing with intimate traumas and memories, the show features 18 works including several new paintings and a sculpture. It would do the reader little service to describe the arrangement of works in the room as they’re repositioned at weekly intervals – a shuffling undertaken at the suggestion of curator Henry Heng Lu in order to allow the exhibition to “live and breathe”. Having said that, in early February a waist-high pile of dark, rich cedar mulch held court in the centre of the room. Topped with a white plaster mask of the artist’s face, the sculpture Self-Portrait as Volcano (2020) was motivated by Wong’s sense that the past year, rife with ecological crises and anti-government protests around the world, was a prelude to even more trying times to come.

Elsewhere around the room were several paintings, many renderedin a neutral palate and resembling organisms viewed under a microscope’s lens. In the oil-on-canvas Emotional Refuge (2018), for example, amorphous pink and grey forms float in front of a pale peach background. A notably more sombre series, History of Emotion (2019-), sees Wong combining Chinese ink, acrylic and oil paint on the same picture planes. The paintings “quickly turned very dark when the Hong Kong protests broke out”, explained Wong, who moved to Canada in the 1980s, in conversation. Four small works from the series, each shadowy and marked with singular, dark, wound-like shapes, were secured to the wall by their edges to somewhat resemble a miniature wall-mounted staircase.

Next to that arrangement was the large oil painting Blind Woman at a Photography Show (VPL) (2010), which depicts a seated woman wearing dark glasses and a soft black coat. While the impersonal title suggests the woman is a stranger, the painting is in fact a portrait of the artist’s mother. Familial tenderness is hinted at in the way Wong treats her form with paint, rendered in his characteristic style of layered, sometimes foggy shapes and yelling edges. The work’s placement in relation to the aforementioned staircase-like configuration is a reference to Wong’s mother’s tragic death when she fell down a staircase in 2009. (Such intimate details, which gave the show a woeful heartbeat, were learned directly from the artist, and didn’t feature in the exhibition texts.)

Wong says he considers art-making to be the closest thing to freedom; his practice is concerned with what he calls “emotional refuge”, or the notion that chaos and negativity can be balanced by introspection and compassion. His work reinforces a sense that was apparent during the summer of 2019: that in trying times which demand collective action, it’s equally important for artists – and everyone for that matter – to also turn inwards and care for the self. Such a concern was perhaps most potently illustrated by Wong’s Self-Portrait as Volcano: the mask’s precarious placement atop the pile of earth suggests that when the volcano does erupt, the individual will be the first to burn.