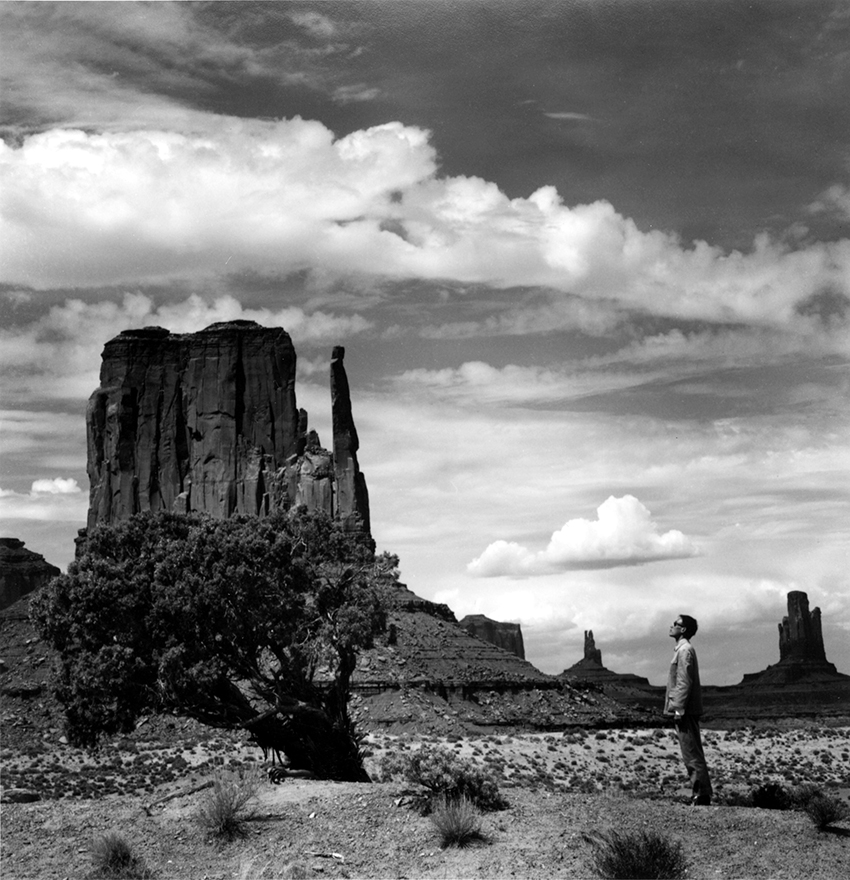 In 1979, Tseng Kwong Chi was meeting his family for dinner at the upscale Windows on the World restaurant in New York’s World Trade Center. Jackets were required for men, and Tseng decided to wear the Chinese-style Mao suit he had bought at a thrift store. Mistaken for a Chinese dignitary, he was treated as a VIP at the restaurant, and from that moment the artist, then 29 years old, would don the sartorial attire of the “ambiguous ambassador” for his self-portraits over the next decade.

Presented by Ben Brown Fine Arts, East Meets West is arguably the late artist’s best-known series of photographic works, in which he poses with famous landmarks around the world in the signature Mao suit and reflective sunglasses. Tseng realised his outfit not only offered him the anonymity of taking on another persona but also a semblance of power when he was mistaken for an important Chinese government official. Back then, China was still a mysterious and unknown place in the west; Tseng played precisely on this mindset among his audience.

The majority of the photographs show the artist posing in instantly recognisable tourist spots around the world, with a deadpan expression on his face, although a rare few show him jumping up like a goofy photobomber. New York, New York (Statue of Liberty) (1979) stands out for its dynamic composition and its commentary. Tseng’s dignified pose mirrors the solemnity of the iconic statue in the background; with the camera’s upward angle, both focal points even appear similar in size. The contrast and nuances between light and shadow are perfectly captured, thanks to the high light sensitivity of the artist’s medium of choice – silver gelatin prints.

The artist also makes a powerful commentary on identity and diaspora. Born in Hong Kong, raised in Canada, educated in France and living in New York, he questions what it means to be American or Chinese, within the US itself and overseas. His works might appear humorous and tongue in cheek, but they address social issues that are still very much relevant today – cultural identity, western stereotypes and perceptions of Chinese abroad, be they tourists or residents.

By contrast, the artist’s later works are a departure from this genre, depicting him in various vast landscapes, but still always in his Mao suit. Created a few years before he died from Aids-related complications, works such as Monument Valley, Arizona (Facing Rock) (1987) poignantly reflect the artist’s changing mood and bittersweet perspective on life – as if he is surrendering himself and becoming one with nature.

Tseng was a photographer, performance artist and documentarian way ahead of his time. His self-portraits explore the notion of tourist snapshots and selfies as art before smartphones and selfie sticks were even invented, while addressing issues still pertinent today. This year marks the 30th anniversary of the artist’s death, yet his fun and at times satirical approach to politics and life makes him modern and relevant to today’s audiences, rendering his legacy both endearing and enduring.