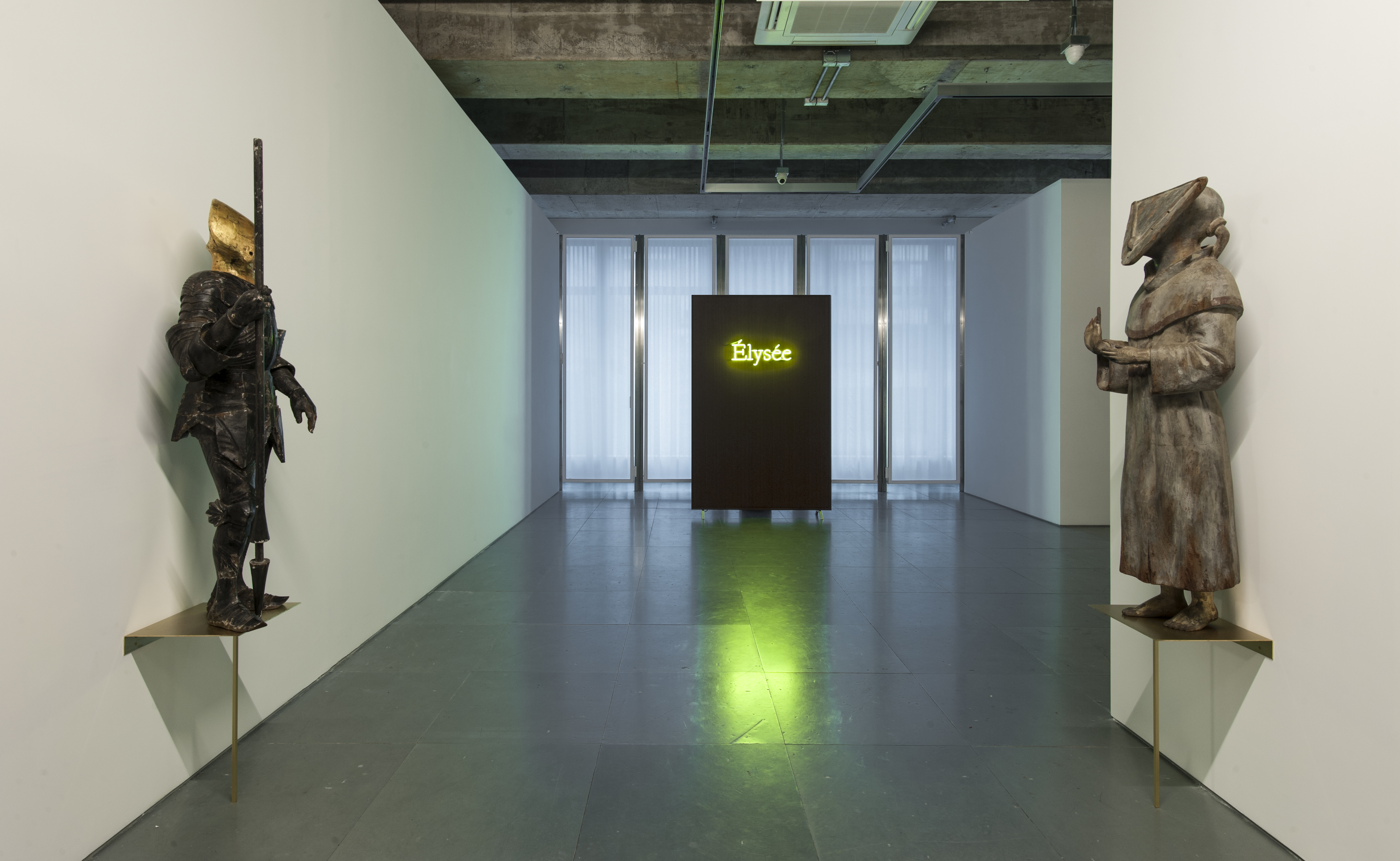 The ultimate theme of Laurent Grasso’s exhibition at Edouard Malingue Gallery is the representation of power, and its fascinating continuity through the centuries, irrespective of the political system. From kings to emperors, and from dictators to republican presidents, the same symbols have passed from hand to hand, embodying the sheer supremacy of the operative leader.

The exhibition’s name is borrowed from Elysée, a new film by Grasso (b.1972), which in turn takes its name from the early 18th-century Elysée Palace, the official residence of the French president. The artist shot the film in the palace’s Salon Doré (Golden Room), named after the gold colour that dominates it and used by every French president except Valéry Giscard d’Estaing as their main study. It was originally decorated for Empress Eugénie, Napoleon III’s wife, and contains furniture masterpieces such as a large Louis XV violet-wood desk created by sculptor and cabinetmaker Charles Cressent. The Palace’s history itself is instructive: it was bought by King Louis XV as a residence for the Marquise de Pompadour, his mistress, and later became the residence of Emperors Napoleon I and Napoleon III.

Grasso’s camera joyfully tracks every single detail of the presdent’s office, from the presidential telephones to heavy Second Empire crystal chandeliers, electric wires, official letterhead and gilded, woodworked table legs. A constant switch between macro and micro perspectives acts as a metaphor for the double meaning of every object, both functional and symbolic.

The president is absent from the film but it is as if he were there: his physical body might not be present but his spiritual one radiates. Historian Ernst Kantorowicz elaborated on this duality in his book The King’s Two Bodies, in which he explores the development of symbolic means for establishing sovereignty in the Middle Ages. The notion of the two bodies allowed for the continuity of monarchy even when the monarch died, summed up in the formulation: “The king is dead. Long live the king.” Grasso plays games with this continuity, initiating a line between temporalities and linking the reality to its fictional and fantasy representations.

Two wooden statues guard the entrance to the exhibition, facing each other in an ongoing conversation: a Jômon priest and a Dogû chevalier, representing the long fight for authority between religion and military force. The figures perfectly embody this imaginary hybridity: the head of the priest is an abstract, triangular-shaped, ancient Japanese sculpture, fixed on the body of a medieval monk. At the back, the yellow-green neon of the word “Elysée” brings supernatural lighting to the scene, while the film’s music, composed by Frenchman Nicolas Godin, better known as half of the duo Air, fills the gallery with an enigmatic atmosphere.

The staging of the exhibition is precisely orchestrated and thoughtful. The artist uses complementary formal repertories to create a multi-layered dialogue between his pieces: hollow spaces respond to solids, angles face spheres, triangles oppose squares.

If gold is the dominant colour, it is paired with greys and browns; the earth stands in contrast with the sun. Grasso collects all kinds of objects, stones and minerals, fascinated as he is by their historical and magnetic charges. Exactly like the objects from the presidential office, every art work conveys symbolic meanings and gives birth to potential mythologies.

The whole exhibition is an invitation to extend our vision of reality while challenging its manifestations and potential manipulations.