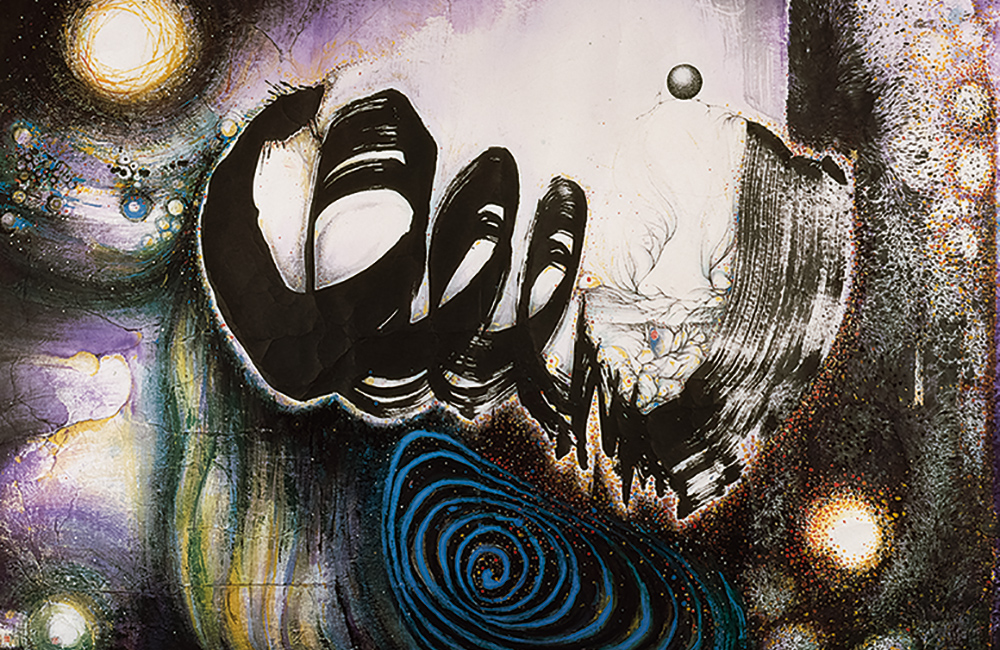 A World Within: The Art and Inspiration of Irene Chou / By Christie Lee /

There’s been a revival of interest the world over during the past few years in the works of female artists, and not least in Hong Kong. One manifestation of this is an exhibition at the Asia Society of Irene Chou, the Hong Kong- and later Brisbane-based artist who illuminated the Hong Kong art scene with her abstract ink paintings in the mid to late 20th century.

Born in Guangdong in 1919, Chou grew up in an artistic environment: her father was a writer, her mother a calligrapher. Lingnan School painter Zhao Shao’ang was her first ink-painting teacher but it wasn’t until 1966, when she began to study under Lui Shou-kwan, a Hong Kong artist who advocated that an artist should combine technique and individual expression in his or her art, that she began to find her own footing. From Zhao she learned technique; from Lui she learned to let go of imitation, a practice long revered in the traditional master-apprentice system, and find material from her own life experiences. All of this is on display at A World Within: The Art and Inspiration of Irene Chou, a riveting show spanning five spaces that maps out Chou’s transformation from a cautious painter who was just beginning to look within herself for inspiration to a restlessly creative spirit who aspired to become one with nature.

The exhibition begins in the 50s. In The Hand, two red gloves are collaged onto a painting with the words “My children, the back of my hand is flesh and so is the palm of my hand” in scraggly script. It is likely a reference to Chou’s attitude towards her two young children, who might have been clamouring for her attention. Next to this is Untitled (Mantis on Ladies Stocking), a painting depicting a spindly mantis perched on the side of a stocking. With the mantis representing intelligence and creativity in Chinese culture, the painting symbolises a sort of intellectual awakening for Chou.

These early paintings form an interesting contrast to the neighbouring space, which features paintings from the 60s to the 2000s. In the 60s, Chou let go of figuration and moved towards pure abstraction, reminiscent of western abstract expressionism. In The Fire (1960s), thick ribbons of fire appear to lash out at the rolling hills in the background and blend in with fiery sky in the top right-hand corner. Despite being painted in 2006, Life is a Many Splendored Thing No 5 reverts back to the collage method from her earlier years. The colours red and green (the artist’s name, Luyun, means “green cloud”) dominate, with words like “fire” and phrases like “all that I’ve wished for in life” and the artist’s Brisbane address collaged onto the composition. By juxtaposing paintings from these two different eras, the room highlights Chou’s transformation, and also sets the stage for the following rooms, where viewers come face to face with this transformation in a chronological display of her works. Even as Chou moved away from the Lingnan School’s focus on technique, there is no doubting her technical precision. In fact, her technique flourished, as shown by Concentration (1973), in which a series of curvilinear parallel lines in varying tones create an undulating form in the shape of an amorphous creature or the interior of a tree trunk.

Lui once said that every artist has a “gen” (root or origin) and a “qi” (energy). Whereas gen is fixed, qi is the vital energy powering the natural world; it’s in every living entity, whether trees, flowers, birds or humans. For the natural world to function properly, the qi needs to be in balance; humans, as part of the natural world, need to follow its rhythms and harmonise with other components of nature. This philosophy forms the basis for qigong, the ancient Chinese meditative practice Chou picked up in the 60s. It is also seen in her paintings. While Concentration and Experience in Meditation No 2 (undated) showcases her technical dexterity, the idea that humans are but one of many components in the universe is in all her paintings. Everywhere you look, Chou appears to be lifting shapes, forms and contours from nature. For the artist, nature isn’t only manifested in
what surrounds us, but also within us. It’s no coincidence that the convex form in Concentration looks so human and tree-like at the same time. The subject underlying all of Chou’s paintings isn’t the individual or nature per se, but both simultaneously. It is Nature with a capital ‘N’; the qi that runs in Chou also runs in her art and the trees and birds she sees. Chou needn’t paint herself into the painting, because she is the painting.

In As You Like It (1999), two vibrantly coloured discs are encircled by billowing lines. The image is reminiscent of pictures of the galaxy, with the two discs doubling as planets and the lines as the Milky Way. Yet the two discs are also reminiscent of human embryos shielded by a uterus wall. Beneath this image are three inscriptions, one of them reading “I hope that starting from tomorrow mankind can suddenly forget the words chou (hatred) and hen (regret), then it will truly be the Great Unity (utopia)”. Seeking this unity appears to be Chou’s greatest task in life.

As Chou’s style matured, her paintings also became more and more dynamic. Purple Universe (1996) is a kaleidoscopic vision featuring swirling brushstrokes, flecks of paint, lines reminiscent of hairline cracks on a ceramic vessel, a perfect sphere. No sooner have you rested your eyes on one element than your attention is pulled away to another. Everything is in perpetual motion. The qi eternally ebbs and flows, as if only in change can the coalescence between the human and his or her surroundings be achieved.

Chou does place one element above all else: creativity. Despite its range of colours, Purple Universe has a focal point: the three imposing loops, created by a single brushstroke, at the centre of the piece. There’s something similar in The Universe VI (1997), where a thick brushstroke sweeps in a horizontal motion across the upper half of the long composition. Behind is a depiction of a landscape recalling a traditional Chinese hand scroll. In Ink Painting (Undated), it takes the form of a massive quarter note-like shape. In all three paintings, the almighty stroke appears to anchor the various elements. If the brush is an artist’s greatest tool, then these fearless strokes represent an artist’s creative spirit.

When we think of ink painting, we think of tradition and heritage, and that unless we trawl through thousands of years of Chinese art,
history and philosophy, we’ll never be able to truly understand it. While in some ways that is true, Chou’s paintings are as much about a woman’s quest to record and work through the tremors in her life with her brush and paper – and the joy, for both the artist and the viewer, that results when someone is given the freedom to express his or her individuality.