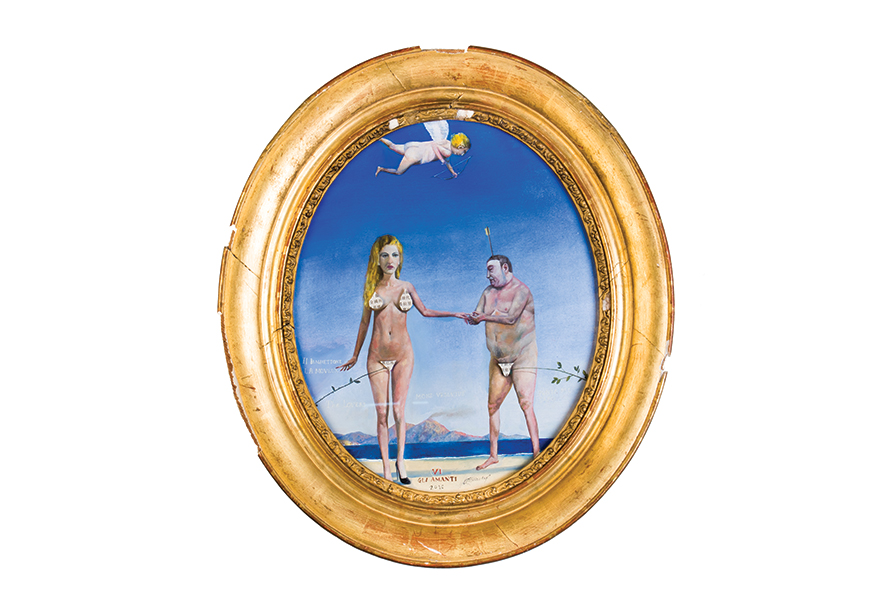 Deity of Doubt, the alliterative title of  Konstantin Bessmertny’s new solo exhibition at Rossi & Rossi Hong Kong, refers directly to the scepticism captured in philosopher René Descartes’ famous proposition “dubito, ergo cogito, ergo sum” (“I doubt, therefore I think, therefore I am”). This sense of intellectual  doubt about both established traditions and  contemporary society pervades the paintings and sculptures in the show, tying them to the varied oeuvre of an artist known for combining  technical mastery in painting, humanistic  learning and a candid sense of humour to create layered, critical works filled with references to western art history and popular culture.

Born in Blagoveshchensk, Russia and based in Macau since 1992, Bessmertny was trained in Fine Art in the grand academies of the former USSR. As a student he “kept the fire” of traditional artistic training – a reference to Mahler’s idea that “tradition is not the worship of ashes, but the preservation of fire” – and
cultivated his scepticism towards today’s institutionalised doctrines that “destruct the classical” in favour of “the primitive, tribal, decorative, popular and industrialised”.

“It was a privilege to study from ‘the last ones’ and use their knowledge in my own way,” says Bessmertny of his traditional art education. “I love to use the deconstructive tactics of the avant-garde over contemporary doctrines”. But instead of defending classical art against adominant narrative that rebels against it, Bessmertny shows through his work that it is intellectually deficient to view avant-garde and classical art as diametrically opposed.

Extending this critique, the works in the show highlight many absurdities and hypocrisies inherent in simplistic dichotomies, whether in art or politics, through their varied iconographic references and symbolism. Under playful but
coherent scrutiny in Bessmertny’s art are not only established traditions that have been challenged by generations of artists, but also dominant ideologies in our own globalised society that often go unquestioned.

Inspired by the religious and occult iconography of tarot cards, Bessmertny embeds his works with rich systems of symbols and words, filling them with layers of meaning that can only be fully deciphered with multiple viewings. “The idea is not to design another tarot card, but to extend its suggested narrative and interpretations to a contemporary state,” says Bessmertny. “I love semiotics. I love the medieval, occultist, Freemason language because I don’t need to use words only to describe all the world’s complexities.”

The High Priestess (2016), a painting inspired by the eponymous tarot card, shows how Bessmertny extends the original symbolism to his contemporary critique. Often known as the Popess, the card refers to the medieval legend of Pope Joan, a woman who disguised herself as a man and rose up the church hierarchy, eventually becoming pope, which some people believe has been systematically covered up. “We discuss the significance of the first black, woman or gay politician today,” says Bessmertny of the supposed historical first depicted in his work, “but imagine, they had a woman Pope back then – even if it’s just hypothetical.”

In Bessmertny’s painting, a heavily made-up, buxom woman is seated centrally, wearing a tall papal tiara and richly patterned vestments in a powerful, open stance. Most strikingly, the figure’s fleshy right breast hangs out, and her lips are a bright red pout. This heightened eroticism opens up an instant discourse on sex and power that links the medieval legend of a subversive female political figure to the present day, when women in power are under more sexual – and often sexist – scrutiny than ever.

This use of historical symbolism and medieval legend as contemporary critique extends to recognisable masonic symbols such as the Boaz and Jachin pillars from Solomon’s Temple that flank the figure and the Eye of Providence in the background. Words surrounding the central figure refer to the “white collar conspiracy” and the “blue collar conspiracy”, suggesting how readily people resort to conspiracies when the patriarchal status quo is threatened. “The legendary narrative of Pope Joan is presented as a love story of a woman joining the priesthood to follow her lover,” says Bessmertny – but, in an era when Hillary Clinton has a solid chance of becoming the first female US president, “We look for conspiracies, financial interests and struggles for power”.

The same discourse is in evidence in other paintings in the show inspired by tarot cards, including The Lovers (2016). The oval painting depicts the titular man and woman, scantily clad in a loincloth and a bikini on a pristine Italian beach. Intriguingly, the bikini and loincloth are cut-outs from newspapers featuring the Chinese names of Hillary Clinton and Barack Obama. Next to these overt links to current politics is an art-historical reference to Il Braghettone (“the maker of breeches”), the nickname of Mannerist painter Daniel de Volterra, who painted drapery over Michelangelo’s figures in The Last Judgment after the 16th-century Council of Trent condemned nudity in religious art.

“Bikinis and loincloths are modern day braghettoni to cover nudity,” says Bessmertny, “and the political bikini is meant to cover the private parts of Adam and Eve, sick in the head.” Indeed, the sexual power play between the figures is palpable as Adam, with Cupid’s arrow sticking out of his head, puts a ring on the white, blonde Eve’s manicured finger – or, as Bessmertny puts it, “to be politically correct, Eve is the one inserting her finger”. In this work, too, Bessmertny draws iconographic and verbal references widely from art, history and politics to trigger a simultaneously imaginative and provocative discourse on sex and politics.

Jack of Diamonds (Left is Right) and Jack of Hearts (Right is Wrong) are a pair of bronze-cast sculptures in the shape of boxing gloves, similar to the pair worn by Charlie Chaplin in City Lights, that highlight the dangers of framing political ideologies as a simplistic dichotomy of left and right. According to Bessmertny, the titles of the works reference how political trends and leanings constantly shift categorically, so that “left” or “right” could be seen as “right” or “wrong” depending on popular opinion. The formal reference to Chaplin’s gloves points to how the pioneering actor fell out of favour with his American audiences after the peak of his career because of his left-leaning views.

“I love bronze,” says Bessmertny. “I felt that it would be the best medium to conflict the over-simplified notions of dividing everything into two groups only, like good guys and bad guys, left and right.” The solid bronze gloves, stripped of their usual cushioned softness and wearability, stand in opposition to each other as left hand and right hand. Look closer, however, and they are almost identical in form, reflecting the arbitrariness of categorising the political left and right as direct opposites.

Throughout the exhibition Bessmertny draws on wide-ranging references to challenge the assumptions of dominant historical narratives while poking fun at the ways these are still manifest today. His critique of over-simplified dichotomies in art and politics is especially relevant in the current global political climate, in which Donald Trump is the Republican presidential candidate for US president and far-right parties are achieving unprecedented electoral success in western Europe.

Referring to his work The Judgment, a trumpet pressed flat in an acrylic display box poignantly titled The Last Trump, Bessmertny says, “As Mario Vargas Llosa claimed in Notes on the Death of Culture: Essays on Spectacle and
Society, the clown is king”. The lingering attraction of Bessmertny’s work lies in the way its intellectual humour and critical candour expose the absurdity of such a “clown-dominated” society through laden references that have to be understood in concert not just artistically, semiotically and verbally, but also imaginatively.