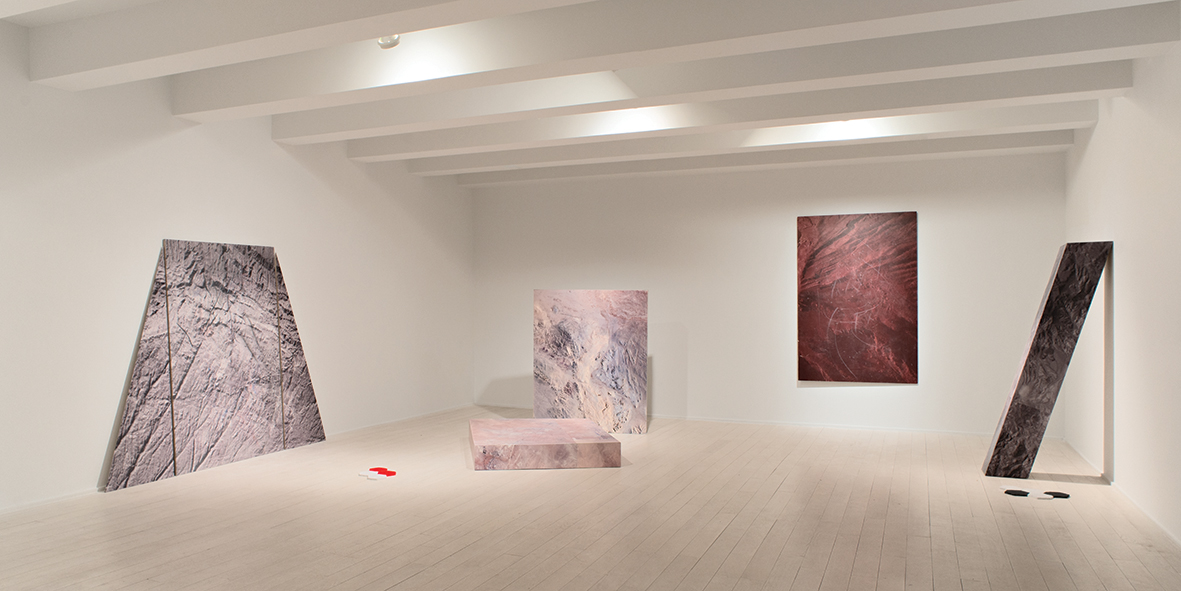 The work of Hong Kong-based, Portuguese-born artist represents a formal investigation of how urban environments are affected by human use – and how those environments in turn affect those humans. Even by his standards, however, his latest work, Benches, Stairs, Ramps, Ledges, Ground, shown after a three-month residency at Jacob Lewis Gallery in New York, is a particularly direct interpretation of this mission, with urban materials that depict aspects of urban environments subjected to the stresses and strains typical of those environments. While in New York Paiva contacted people who make skate ramps, covered those ramps with satellite images of urban areas, depicted in ink that would run readily, and got skateboarders to do their thing on them.

“I’m very interested in not controlling the final outcome, and so I wanted to work with these images but I wanted not to control them,” he says. “Street skateboarding is interesting – it’s a repurposing of urban space. It’s about which parts of structures they find interesting and use. It’s not about skateboarding – I’m interested in the product of their performance, not the performance itself.” Throughout his work Paiva highlights the formal qualities of everyday objects – within the urban context, usually the sort of functional spaces that are usually taken for granted and ignored. He then drains them of their usual content, so that cities and the objects of the cultures that fill them are reduced to purely formal qualities, devoid of signification. In his 2011 show Palimpseptic, for example, what was once Hong Kong suddenly could be anywhere, with rendering of the city with the people abstracted into blocks of colour, and in Counterpoints, his set of MTR turnstiles responding to the movements of invisible people, abstracted to the point of removal. Similarly his video Thresholds (2013) is a tour around Causeway Bay, Sham Shui Po and Mongkok with all text removed, so advertising signs become ominously empty blocks of colour; we only become aware of how much these messages usually monopolise our attention through their absence.

But for an artist often characterised as primarily urban in his inspiration, many of Paiva’s works approach natural phenomena in much the same way. The same themes of containment and space, disguise and encryption also play out in wide open spaces, for example, in Unlimited (2014), which complemented a video and a series of paintings with an installation of naval communication flags encoding messages from two classic colonially themed novels along the Brisbane waterfront. His video Forced Empathy (2011), meanwhile, shows a buoy floating in Hong Kong harbour that appears to remain still while the Kowloon landscape bobs up and down behind it, in the way you’d normally expect the floating object to.

“I’d say there’s not really a difference between manmade and natural,” says Paiva. “Just the materials are different. It’s easy to frame me as someone interested in the urban environment, but really I’m interested in what people do to places and what places do to people – how people live and how their environment acts on them over time. And everything is human; in Hong Kong, even the sea is a highway. It’s all about actions: the laundry drying, the posters on the wall. There’s a huge creative outcome: all those people creating something, even if they don’t know they’re doing it.”

Originally from the quiet cultural capital Coimbra, Paiva moved to Hong Kong in 2006, originally to study, and has lived on rural-urban Lamma island since 2011. He says his status as an outsider in Hong Kong, somewhat distant from the local culture, has shaped his work in its abstraction, its apparent vision of a universal visual language through which to interpret diverse environments.

Until the past couple of years he was more in demand outside Hong Kong, but local interest has picked up recently. Most notably he turned heads last year when his installation Mausoleum, a hefty, rather mesmerising stack of styrofoam boxes cast in stone resin, was the star of the Encounters section at Art Basel Hong Kong. It revisits both the materials and the themes of Untitled (from the Wanchai Market) (2013), in which discarded styrofoam fish boxes were cast in resin to become something far more heavy, solid, permanent, transforming them from discarded material to cultural artefact.

“Mausoleum was all started by me looking for the debris of commercial neighbourhoods in Hong Kong, paying attention to how people organise styrofoam boxes,” says Paiva. “The resin casting became interesting: I was working with a factory in China and I became interested in their mistakes.”

Not that he wouldn’t mind if the production process were a bit more straightforward in Hong Kong – something of which he was forcibly reminded during his recent New York sojourn. “To produce work in Hong Kong, you have to explain a lot, oversee closely, and be open to things going in another direction,” he says. “In New York everyone was extremely professional; you have art students who’ve set up workshop and can explain materials to you. Most people in Hong Kong find my work ridiculous – which is the point of it.”