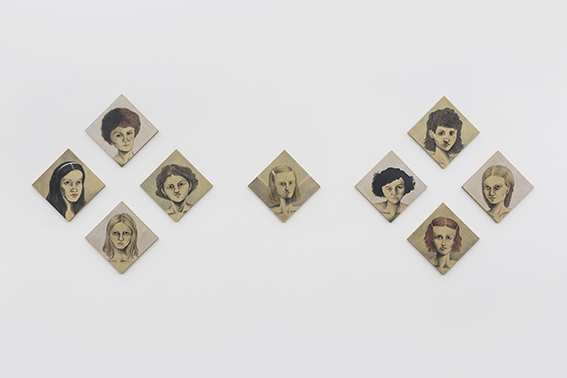 Visitors entering Ho Sin Tung’s exhibition at Chambers Fine Art in Beijing are confronted with posters like those hung outside Hong Kong cinemas. For the Hong Kong artist’s first solo show in mainland China, she has chosen two types of custom-made frames in a variety of colours to hold these posters and emphasise the idea that they advertise movies. On closer inspection, however, the posters, executed with coloured pencil on tea-stained paper, are revealed to promote fictional movies, mainly horror.

For example When the Triangle Descends the Stairs (2016) pays homage to Hitchcock’s Psycho, including its famous shower scene, the large house and its stairwell. With her dry sense of humour, Ho replaces the murderer with a geometric form, a triangle, raising the question of fear of the unknown. “A horror film always reaches its climax and ending at the moment when the unknown reveals itself,” she says. “But what if a triangle descends the stairs? The unknown and the known will arrive at the same time.”

Born in Hong Kong in 1986, the artist references social issues affecting the city. In The Weaker Man (2014) she uses another fictional horror movie poster to depict the Hong Kong police like zombies chasing homeless people off the streets of the city.

Other posters address topics such as anxiety about natural disasters; ancient Chinese deities that are revered in mainland China but feared in Hong Kong, Taiwan and Macau; the Korean obsession with cosmetic surgery; and making a horoscope seem reliable through pseudoscience.

Ho’s multimedia work Last Party (2016), in a side room of the gallery, is based on Pier Paolo Pasolini’s dark, sardonic Salò, or the 120 Days of Sodom (1975). Set in a fascist country where a group of powerful and corrupt leaders abduct, abuse and torture 18 youths, it is often nominated as one of the scariest movies ever made and is banned in many countries, including mainland China. Ho’s work consists of three sets of portraits, a carpet and a video: portraits of the four culprits on one wall are flanked on the left and right walls by 18 smaller portraits of the pale, tortured victims, with female and male portraits on opposite walls. A carpet with geometric patterns in the middle of the room, like the one in the movie, is where we are asked to imagine the torture that took place. The work provokes feelings of angst and unease; even for those who have not seen the movie, scenes of violence and abuse are conjured up in the head.

Ho’s passion for cinema shines through in this show. The artist employs the outer forms of movie posters, with their vitrines and graphic style, as a framework for conversations about social and political issues, or just to poke fun at cultural trends.