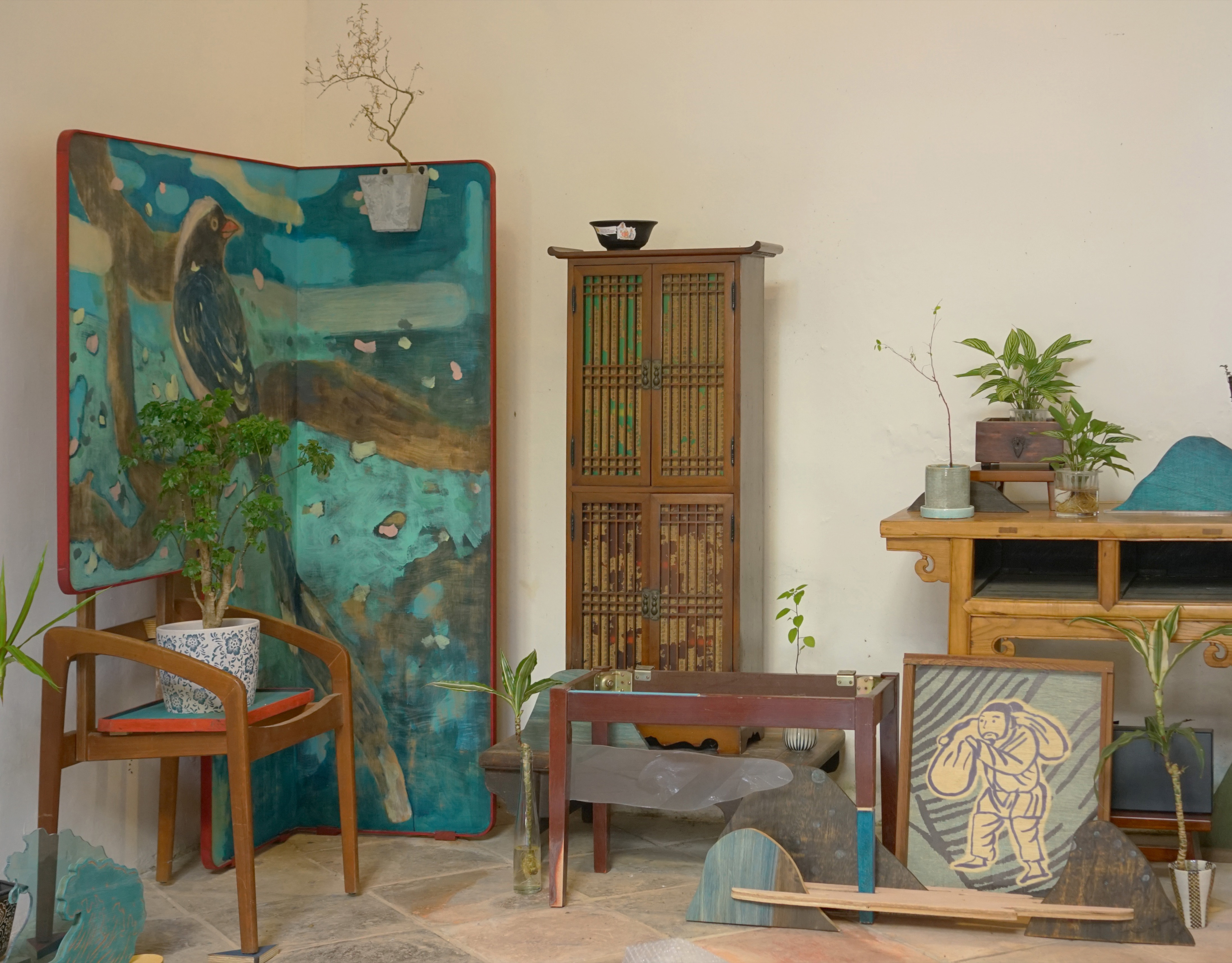 In Hong Kong many heritage buildings have been destroyed or neglected, and the government has only had a heritage-preservation policy since very recently. Its Art Promotion Office invited four Hong Kong artists to revitalise four centuries-old houses in different corners of the territory, using art as a subtle but powerful tool to link the past with the present and revive collective memory.

The exhibitions recall in particular the Hakka heritage of Hong Kong, the commercial prosperity of the city during the 19th century and its role during the overthrow of the Qing Dynasty through the figure of Sun Yat-sen. All the heritage buildings connect Hong Kong with the history of China from different perspectives, at a time when the question of identity is particularly strongly contested.

The artists’ research involved meeting descendants of the clans, neighbours, guards and village elders, in order to collect micro-histories, which they mixed with their own stories and historical events. They thus became storytellers, weaving fiction and reality to transform archives, empty walls and facts into vivid contemporary experiences. The cultural heritage consists not only of the buildings but also of traditions, oral histories, social practices, knowledge, values and skills that increasingly tend to be forgotten.

Invited to intervene in the Law Uk Folk Museum, an overlooked 18th-century Hakka house lost among high-rise buildings in Chai Wan, Fiona Wong underlined the importance of connecting the past with people’s daily lives so that visitors start actively thinking about their own histories. The Hakka kept moving south during their long migrations, and used to leave everything behind them, except their language and will for learning, so their traditions incorporate elements of many other cultures and keep evolving. To embody this constant adaptation, Wong composed her own Hakka-style song, based on a traditional melody.

Originally from Guangdong province, the Law family, who built the house, were rice-farming peasants who also raised chickens and pigs. Wong tried to imagine their lives and felt particularly touched by the frugal, hard-working lives of the Hakka women. She introduced pieces of furniture and new art works to the former farm house, as if she were going to move in. She even decided to dedicate one room to her pottery studio and added a window to invite light inside the dark main hall; there had been few windows, for fear of thieves.

Wong also gave shape and weight to the archives of the house she collected, like a wizard transforming paper and data into ceramics. She invited six artists, including ceramicists and a carpenter, to collaborate on the project, which was a good way for her to open up her practice and to give opportunities to young artists. Together they brought life to abandoned tools and made new vases, with ceramics in the shape of salt-roasted pigs, a classic dish in Hakka culture, popping up in the fireplace. The harmony between the old and the new is amazingly successful.

Specifically, Wong created a ceramic dress resembling the ones that Hakka women used to wear. Both fragile and massive, this representation of a traditional garment is especially moving because it stands out of time while still being tangible and accessible. In the courtyard are shades inspired by the women’s black hats; the construction is basic but the idea of searching for protection under these hats is poetic.

Bearing in mind the strong links in Hakka families, Jaffa Lam surrounded herself with more artists, forming the Jaffa Lam Collective. They revived the Sam Tung Uk Museum, another typical Hakka walled-house built in the 18th century, with the idea of celebration and reunion.

Lam was inspired by lyrics she heard in Penang, a place that also has a Hakka tradition, and mixed them with lyrics and poems from the Song Dynasty, a time when Hakka ancestors moved to south China. These are nostalgic songs about farming and people’s daily lives. She directed Lee Man Sang to sing them in the Hakka dialect and recorded them, and then Steve Hui, aka Nerve, recomposed the whole piece.

In the entry hall, an imposing yet delicate stainless steel sculpture representing sea waves broadcasts recordings of Lam’s heartbeat. They echo and join the songs so that the energy of all the artists seems to merge together. They represent the spirit of the family that Lam wanted to highlight in the installation as a whole.

Another key element is the omnipresence of water as a link to nature and as the centrepiece of the place. Before the construction of the house, a well was dug in the courtyard to designate the centre of the building and to respect the feng shui alignment. Lam’s almost liquid sculpture forms dark, shiny curves that reflect both the sky and the person looking at it. The artist made it in her home province of Fujian, from which the former inhabitants of the house, the Chan clan, originate. The sound of the water flowing, recorded at the water source of the relocated Sam Tung Uk Village, fills the whole space, while a turquoise light invites visitors to escape from the present and wander back into the past. All the works are deeply in line with the architecture of the place and sometimes so cleverly entwined with existing artefacts that they can be hard to find.

In the former bathing area, the artist has transplanted a strong tree from the new village, helped by the village chief. Lam likes to recall the old Chinese saying about moving mountains. Everyone thought that a single individual couldn’t move a mountain, but one man did it by moving the rocks one by one, finally getting the support of his family and others, and moving the mountain. She felt she did the same, bit by bit, with the help of everyone. As a symbol she collected rocks from Hakka villages, a gesture typical of her practice, which is based on community and social sharing.

Both Jaffa Lam and Lam Tung Pang sowed green plants as a symbol of rebirth and people’s ability to adapt to any new environment. The two artists are originally from Fujian, and these old villages revive their own stories: Lam Tung Pang even came back to visit his father’s home, connecting his childhood memory with the Wong Uk house where he was invited to work.

Wong Uk Village’s story reflects the history of urbanisation of Hong Kong: founded in the 18th century, it became a major trading station on the route between Guangdong and Kowloon, then fell into ruins and was later demolished to make way for the development of Sha Tin New Town. All that remains is the Old House, a two-storey green-brick structure with fine mural paintings and traditional decorations. Lam, who has been living nearby for more than 30 years, discovered it, and by visiting it regularly started to build a relationship with the building and its carvings.

From the installation Chronicle of Law Uk Retold by Art by Fiona Wong. Courtesy the artist.

Like Fiona Wong, he wondered what it would be like to live there, and brought some furniture to fill the house, which was absolutely empty. Collecting these antiques was part of the process of creation, with the artist searching for the right pieces and collecting their stories together with them. He spent four seasons inside the building, from winter to winter, trying to create a link with it, and visiting it like an old friend. While dreaming and watching how the sun entered the space, he decided to add two more suns in the form of video projectors, to repeat this effect all day long. The artist also added his own paintings on wood, naive figures of men or animals that seem to have been there forever. Lam’s work has always reflected the passage of time, embracing a fluid identity. The warmth of the wood and the delicacy of his installations invite the visitor to travel in time and daydream.

For Wilson Shieh, it must have been a real challenge to work within the space of the Dr Sun Yat-sen Museum, a huge Edwardian mansion transformed into a cold, pedagogical museum. His clever idea of working on screens has allowed him to maintain a distance from the imposing architecture of the place but add his own touch with large, vivid, colourful paintings. Since it is difficult to feel at home in such an impersonal volume just by adding something personal, the artist focuses on the life of Sun Yat-sen, choosing to illustrate the places he travelled to, including Guangdong, elsewhere in China, Hawaii and Japan. In this way, both Sun and Shieh navigate between the east and the west, and this interlocking of influence and fusion is interesting at a remove of 100 years. Born in Hong Kong, but with parents from Guangdong, Shieh feels that Sun’s early life resonates with many later generations of southern Chinese. As a student, he was familiar with the neighbourhood where Sun used to stay and study.

The artist selected four art-school graduates to work with him, which explains the different qualities of the various works. Each artist brought his or her own style, from oil painting to watercolour to gongbi, the traditional Chinese brush technique used by Shieh. All the drawings were scanned and arranged on computer by designer Max Tsoi, before being printed on cotton fabric and mounted on screen panels. Despite the diversity of the styles, Shieh and his team succeeded in adding life to the austere presentation of the revolutionary heroes. Shieh’s series of portraits of politicians, artists and writers from the turn of the 20th century is especially accomplished and, as usual, full of humour. This was Shieh’s first experience of working in a historical building, but it’s
something he wants to do again.