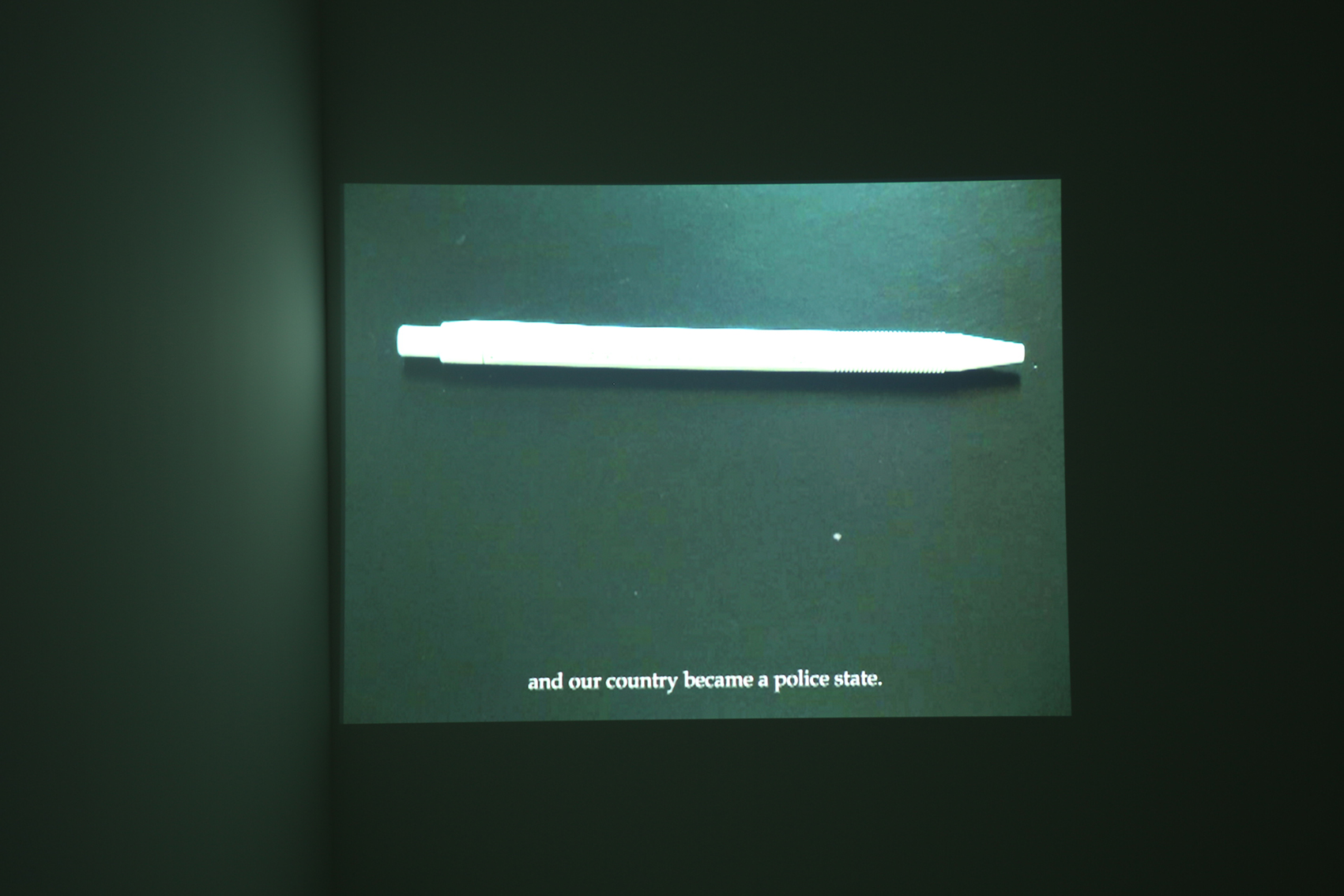 Something You Can’t Leave Behind

The introduction to Lee Kit’s first solo show with Massimo De Carlo Hong Kong, Something You Can’t Leave Behind, opens with a lengthy quote containing sentence fragments and abrupt imperatives that is at once baffling and transcendent. After a series of disjointed declarative statements – such as “there is a movie in every corner”, “a bus ride might make you smile” and “our time has gone” – Lee commands viewers to “mute the voiceover”, before ending by saying “something you can’t leave behind”, the show’s titular reference to elusive and ineffable but persistent traces of life and memory.

The intimate narrative of the show, composed of eight site-specific works with complex combinations of projections and Lee’s characteristic mixed-media paintings and drawings, is as much a stream of consciousness as the quote. While the show’s “something” seems intertwined with Lee’s individual consciousness, manifest in ghostly imprints of mundane objects, disembodied gestures and
idiosyncratic expletives, the multifarious interplay between tangibility and intangibility, light and shadow, sharpness and blurriness, and contrasting scales brings out something more universal: that, in myriad ways, personal
memories interact with and reveal psychological truths larger than individual experience.

In many works, the material elements of composition, including cardboard and plywood supports but also, in one case, a blank piece of paper, are presented together with lightprojections far exceeding their physical boundaries. These encompassing blankets of light never obscure what is physically there in two and three dimensions, painted, drawn and put on the walls; rather, the juxtaposition of smaller motifs – particular “somethings” in words and sketches – within larger expanses of forms, colours and moving images suggests that singular memories can exist as entities in sharp focus while merging into bigger narratives.

Viewers first encounter A Piano Song (2017), a work in emulsion paint, inkjet ink and pencil on plywood that interacts with a large rectangular projection featuring blocks of white, grey and green on the wall. Within this intangible canvas of light, the plywood occupies a small area, on which an even smaller square is delineated and shaded in pencil, leaving the shape of two cadaverous, disembodied hands with missing fingers in white. By itself, this sole pictorial element is an arrested gesture caught in memory limbo; but interacting with the pixels dotting the wall, it becomes part of a much more complex visual composition. It is unclear which parts exist physically on the wall and which are projected until some cast a shadow. With the light blocked out, the image becomes dimmer and even more ghostly, but it still has a concrete presence, speaking to the way larger memory narratives can subsume daily moments while these singular traces linger on in essence, as lasting snapshots.

This is something in my head, Acrylic, emulsion paint, inkjet ink and pencil on paper, looped video, plastic boxes, dimensions variable, 2017.

The piece Something You Can’t Leave Behind (2017) features a similar gestural motif: a pair of disembodied cupped hands drawn ambiguously so that they could be about to commit either an act of compassion or an act of cruelty. The background of the plywood, painted in shades of light colours and marked with pencil lines, blends visually into the wall behind it, which shows uneven patches of white and lacks a finishing coat of paint. Although no projected light engulfs the work, the patchy whitewash of the wall forms the larger backdrop to the painted plywood, focusing attention on the central image, a synecdoche as sharp as it is puzzling within an encompassing but indeterminate expanse of tones and hues.

The uncanny video work A Story About Autumn (2017), showing the still image of a pen with the motivational inscription “no rain no rainbow” throughout, references a recent memory, the Umbrella Movement. Over a jazz melody, subtitles loop onscreen at aconversational pace, telling a simple love story, the coherence of the narrative breaking away from the show’s stream-of-consciousness mode. “He was a great guy,” the mute narrator begins, before taking an eerie turn with “Our country became a police state”. Then, with “One night, I killed him”, the narrative abruptly becomes a murder confession. Since the pen onscreen divulges nothing and the tone of the mute narrator is impossible to determine, the recounting of the killing is stripped of any weight and emotion appropriate for such violence. With its reference to the Umbrella Movement, the work taps into viewers’ collective memory, suggesting perhaps that impassioned acts of resistance could over time easily be reduced to apathetic though persistent and looping narratives.

A story about something, Looped video, A4 paper, dimensions variable, 2017.

A Muted Voice (2017) shows the words “you fuck you” stencilled vertically downwards, while on the cardboard background pieces of tape mend small but visible cracks. The orientation of the words forces viewers to pronounce them one at a time to form a full sentence with subject, verb and object. In doing so, the everyday expletive “fuck you” becomes alienating in an unfamiliar sentence structure, resulting in an uncomfortable formality void of rudeness. Swear words, usually laden with emotion, are often the only vestiges left when a person loses language ability. Foregrounded against the crackingbackground, “you fuck you” is no longer an impassioned interjection; it still persists vividly, but only as three hollow forms.

The video Skin (A Secret) (2017) focuses on a plastic box; the link to the theme of memories is clear, boxes being associated with storing old belongings. Through subtitles at a conversational pace, the mute narrator tells a story of a “he” who “used to keep all his secrets in a tote box” and “felt the box had become his skin”. Throughout the narrative, told like a secret, the box remains empty despite all the memories supposedly in it. An example of Lee’s characteristic use of mundane, everyday objects to tap into something transcendent, the ordinary box points to a phenomenological question: whether memories are substantial when laden only with a certain psychological weight felt by an individual, without any physical presence.

A Story About Something (2017), another video work with a large-scale projection reaching up to the ceiling, extends the stream-of-consciousness narrative of the show with disjointed shots of open windows, grassy banks and blurred hands, accompanied by enigmatic subtitles such as “reality tears a person into pieces”. While the ambiguous narrative suggests an aching nostalgia, the central element of the work is a blank piece of A4 paper on the wall, subsumed visually by the projection. The blank paper, an everyday object often associated with a clean slate, highlights an emptiness that seems insignificant compared to the overwhelming scale of the projected memories. As the video loops, the A4 paper is barely visible, imprinted with a small section of the moving images without obscuring anything; but when the video stops, the paper is all that is left, suggesting that memory traces without any distinct details could refuse to fade, steadfast in their blankness.

In There is Something in My Head (2017), the six words of the title flash insistently on the wall along with a blurred projection of a hand, the outline of which matches a cut-out pencil drawing beside it. A stack of plastic boxes, as featured in Skin (A Secret), blocks the projector, refracting and warping the image projected on the wall. Recalling the earlier gestural motif of the disembodied hand, the blurred image could be read as an imperfect mental reflection of the realistic drawing, which is not only physically present but also in sharp focus. The compulsive flashing of the words seems to suggest an impatience at the tenacity of certain memory traces even in their blurred and imprecise forms.

The final work, Someone You Can’t Leave Behind (2017), a drawing of a short-haired woman’s profile as she turns away, is the most readable. Framed by strips of shading, the drawing looks as if it has been cut from the film of a mental black-and-white photograph. While this image of a person is vivid and detailed, it is also drained of colour, contrasting with the vibrant light blue of the background. Aside from the subtle melancholy of the grey, the work is hung on a dark wall in the gallery, overshadowed by projections from nearby works, leaving viewers with a solemn “something” crystallised into the parting sight of a loved one, laden with more meaning than a disembodied gesture, a mundane object or disjointed words.

A psychological intimacy throughout Lee’s show urges viewers to search intently for his“something”, both in the depths of their own memories and in the works’ visualexternalisation of streams of consciousness. Sometimes this elusive something is in sharp focus within fuzzier contexts; sometimes it remains intact through refraction and bending; sometimes it is blank yet somehow ineffaceable; sometimes it is laden with emotional weight; and sometimes it remains indelible even after being stripped of all meaning. The partly reflective, partly visceral process of identifying it connects artist and viewers, reaching beyond the personal to reveal universal but ineffable truths about life and memory.