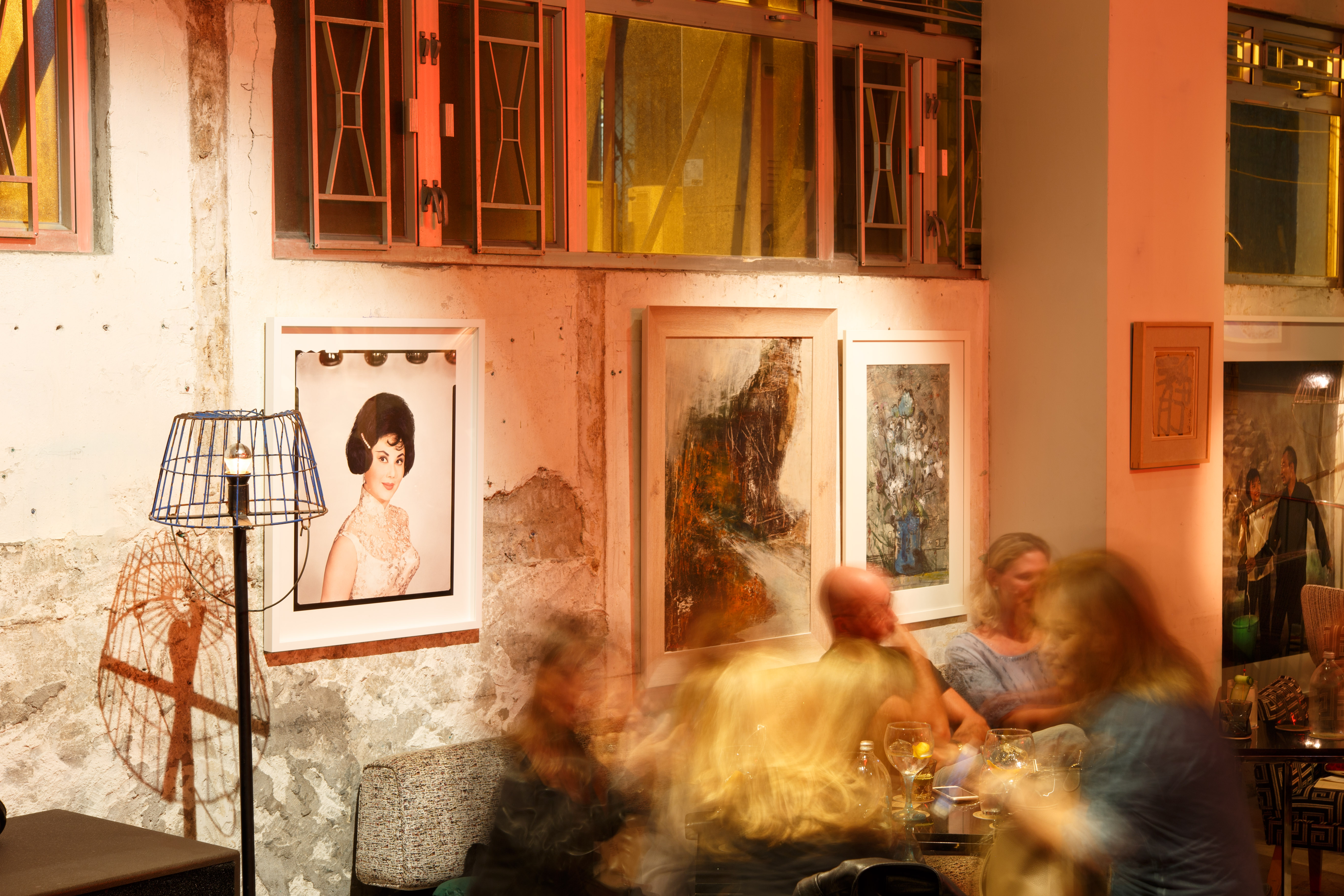 I remember the 1970s as a smoky-hazy, evolving time, with a generation gap opening up between World War II/Depression-era parents, and teenagers experiencing the overhang from the previous decade, the dreamy 60s. Hong Kong in the 1970s was caught in some of the overhang. In the early years of the decade the Vietnam War’s destruction continued, and its aftermath would continue for decades, with boatloads of refugees arriving in Hong Kong; and China’s Cultural Revolution and its “struggle sessions” murderously justified retribution between the classes and China’s competing political factions – until it ended with Mao Zedong’s death in 1976. Meanwhile, Hong Kong was an active and important interface for Cold War posturing. It was a highly militarised place, with countless docks,barracks, airfields and spy-listening facilities scattered around the “territory” – all now,ironically, occupied by the People’s Liberation Army. Naval cruisers, destroyers and aircraft carriers of the western powers regularly pulled into Victoria Harbour for refuelling or a wild period of R&R. Only vestiges of that time survive: Tsim Sha Tsui’s Red Lips bar is there in name only, but drinks still flow and traditional jazz is still played at Ned Kelly’s Last Stand, which retains its original 1870s-style/retro-1970s ambience. Hong Kong’s Foreign Correspondents’ Club has a room of war photographs and the China Fleet Club in Wan Chai continues to offer advice to visiting servicemen and kindly makes available a dedicated letter-box for physical mail to be sent directly to the US.

While world-interest stories and Asian vignettes were reported by Hong Kong-based China watchers, often through the excellent weekly Far Eastern Economic Review, most people living in Hong Kong were just happy to eke out a living. The British touch-base policy, in operation until 1980, allowed immigrants from China arriving in Hong Kong who reached the urban areas to apply for residency. A continuing influx of immigrants, mainly young men, offered cheap labour, fuelling Hong Kong’s legendary entrepreneurial spirit and manufacturing industries. Hong Kong’s famed trading and shopping status was cemented in the early 1970s with the start of low-cost mass airline travel. But housing was very tight and at the end of the decade more than 700,000 people still lived in crowded, makeshift squatter areas.

Hong Kong has always been a place of split communities – between western and Chinese; rich and poor; English and Chinese languages; educated and uneducated; public and private housing. However, the 1970s saw fundamental changes in colonial government policies towards its responsibilities in Hong Kong. Its culmination was the Sino-British Joint Declaration of 1984 to return Hong Kong to China in 1997. Ironically, among this realpolitik came the maturing of a homogenous Hong Kong Cantonese identity, coalescing the different language and cultural groups of Hakka, Chiu Chao, Taishan, Tanka, Shanghainese and so on, and concentrated in universally enjoyed Cantonese pop songs, sung in a vernacular, street style of the language; action films featuring Bruce Lee, Sammo Hung and Jackie Chan, and the quickly produced, ubiquitous Cantonese comedy films; alongside the drama and television movies of Ann Hui and Patrick Tam.

Art and culture in Hong Kong had never received much formal support from British colonial administrators, but after the agitation of the Cultural Revolution had spilled into Hong Kong and incited the 1967 riots, the government instituted a range of community contact points, facilities and activities. The first Hong Kong Festivals in the 1970s were forerunners of the current Hong Kong Arts Festival. Plans were formulated for the Hong Kong Cultural Centre in Tsim Sha Tsui, comprising performing-arts venues and a larger museum, to provide greater exhibition space than the Hong Kong Museum of Art’s Central City Hall site. In 1973 The Chinese University of Hong Kong (CUHK) moved to its present Shatin campus, while the first fine-arts students at the Confucian-liberal-arts New Asia College, one of the constituent colleges of the university, graduated in the late 1960s.
Hong Kong’s artists, those inspired by modernism rather than traditional ink painting, received art training from a variety of sources: prominent were teacher-training colleges and the Extramural Studies Department of CUHK; artist Luis Chan had previously received tuition by correspondence from London. Exhibitions were often self-organised or through artist groups, such as the Hong Kong Art Society, and held in informal exhibition venues including Li Hall of St John’s Cathedral. John Warner, the first chief curator of the Hong Kong Museum of Art, was supportive, and often opened the museum’s galleries to group exhibitions by Hong Kong artists. One of Hong Kong’s first commercial galleries, Chatham Galleries, showed local artists.Ping Pong’s exhibition of 20 Hong Kong artists working in the 1970s is a taster of what was happening during that decade. It is also a timely reminder of the origins of Hong Kong’s current contemporary-art scene – and of the city’s quiet inner strength, achieved despite and alongside its own singular energy.

Hong Kong’s art scene in the 1970s was small, but there was fluid interaction between a mixture of enthusiastic foreign and local artists. Trained western artists Kitty Burns and Rosamond Brown happily mixed across the social divide and regularly debated art issues and shared art materials with local artists, including Hon Chi Fun. The Taiwanese-trained CUHK arts teacher Cheung Yee was highly influential for a generation of young artists including the self-taught Ha Bik Chuen, whose style was highly imitative of Cheung’s. The graphic artist Arthur Hacker brought a strong design sense direct from then swinging London, and a subversive sensibility, as in his Lap Sap Chung litterbug cartoon character, that has influenced a generation of fellow designers and cartoonists. Douglas Bland, whose work is ripe for reassessment, bravely combined western and Chinese ink-painting techniques and composition in his work. Yau Leung is known for his black-and-white photographs of Hong Kong’s older urban areas, but he also undertook commercial colour photography assignments. Liu Kuo-sung abstractions had a stronger personal style than the highly derivative geometrical sculptures that continue to oppress many of Hong Kong’s public spaces. And, of its time, the graphic glimpses of rock music cover art in Brian Tilbrook’s painting can still be appreciated at Pacific Place.
Fantasy has a special place in this period. The sculptor Antonio Mak juxtaposes various incongruous elements, lions and ladders with people. Gerard Henderson’s paintings can best be seen in the Mandarin Oriental Hotel’s Grill Room – commissioned pieces darkly evocative of bacchanalian scenes of the good life. The amorphous, humanoid shapes of Gaylord Chan and the beautiful otherworld and childhood reminiscences of Chu Hing Wah both set a high bar, one they would dynamically explore in future years. Kwok Mang Ho, Hong Kong’s inimitable Frog King, experimented with different media in the 1970s; an example of his use of car tyres as sculpture is on permanent display in an obscure location in the lobby of City Hall. Irene Chou, with Lui Shou Kwan, bridged the boundaries of Chinese gestural ink painting into Western abstraction.

Luis Chan is the star of this period, and one of the most remarkable artists from Greater China. From being overtly conventional in the 1950s, he undertook a complete reversal of style after seeing contemporary-art exhibitions and encountering pop art and design in the 1960s. Chan depicts Hong Kong in a sea-bound landscape of mountains and clouds comprising a fantastical array of people and animals. He is a unique ink artist who captures Hong Kong as an evolving historical landscape.

Luis Chan’s Wan Chai studio remains, untouched, and kept intact by his family. It is tempting to think how he would now depict Hong Kong’s sky-high skyline that too often blocks the mountains and seashore so integral to his paintings.

This article is adapted from the catalogue essay published to accompany Hanging Out – An Exhibition of Hong Kong Art of the 70s, in the bar setting of Ping Pong, Sai Ying Pun, Hong Kong, from 29 March to 15 May, 2016.