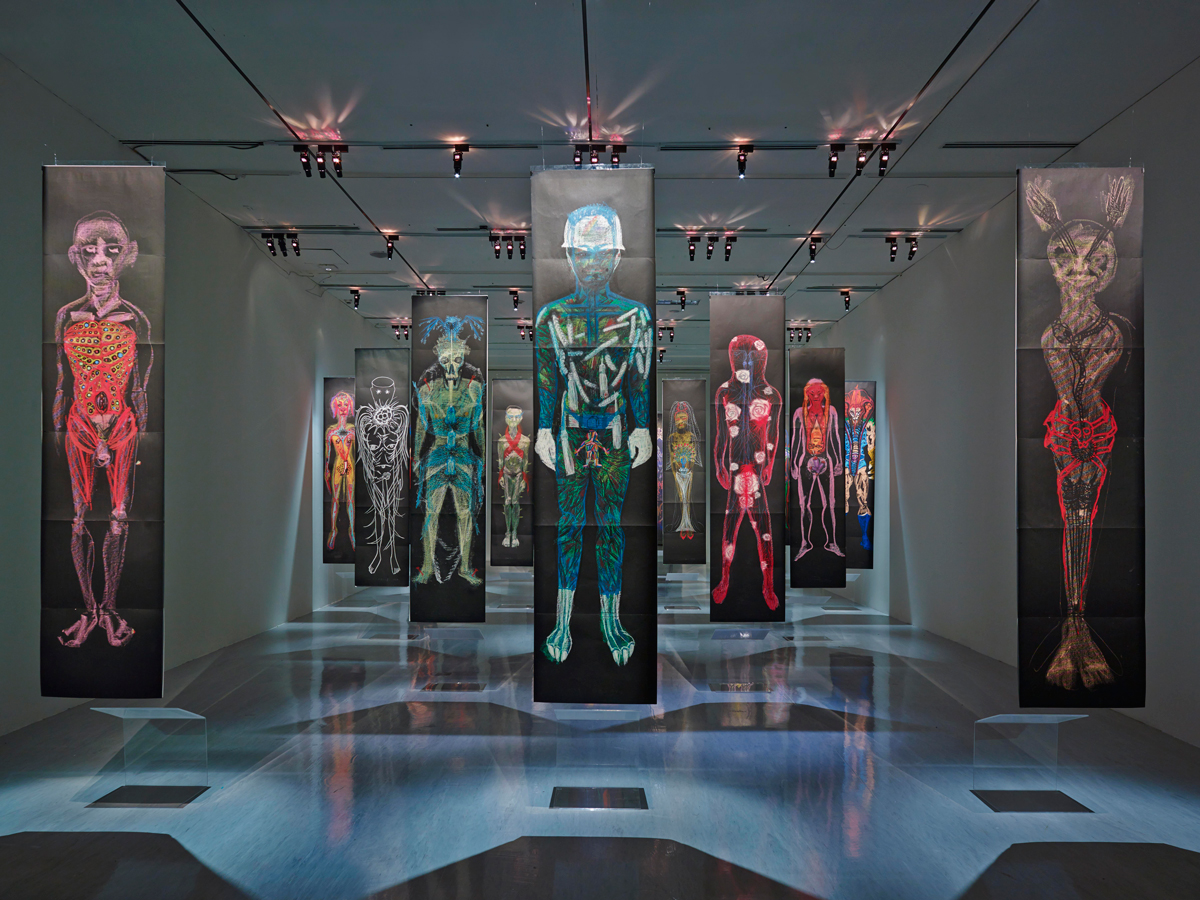 Spectrosynthesis – Asian LGBTQ Issues and Art Now at the Museum of Contemporary Art, Taipei in September proclaimed itself to be Asia’s first “LGBTQ art” exhibition at a state-owned museum. In addition to being the icing on the cake after Taiwan became the first Asian country to legalise same-sex marriage, it also marks the homonormative order finally gaining acceptance in its political, economic, social and cultural aspects. Although successful in its scope and accessibility, the exhibition failed to explore a more creative/destructive gender imagination, and inevitably felt too safe to an audience familiar with gender issues.

The exhibition took three years to prepare, with curator Sean C S Hu classifying all artists that belong to the politically marginalised or the non-heterosexual mainstream as “tongzhi”, a collective term that usually encompasses lesbian, gay, bisexual and transgender. The inclusive definition of the term was an attempt to efface the question of who does and doesn’t qualify, plus some works of unspecified gender orientation also helped to dilute the stereotypical image of “tongzhi art”.

Although the 44 works from 24 artists were not exhibited chronologically, with its timeline from the 1950s to the present, this was a historical inventory. The exhibition kicked off with the paintings of veteran artists Shiy De-jinn (1923-81) and Ku Fu-Sheng (1935-2017). Not only did this let us revisit the seminal works of the old masters, it also linked “” with historical classics – Shiy was a student of pioneer Lin Fengmian during the latter’s Hangzhou School of Art period, while Ku was a member of the innovative Fifth Moon Group of modernist artists. These early explorations, which were not ostensibly “tongzhi art” but essentially created through desire, became the legacy upon which the male-male homosexual art of Martin Wong, Wang Jun-Jieh, Xi Ya Die and Yan Xing built. Apart from muscles and organs, the photography and video of Tseng Kwong Chi, Tzeng Yi-Hsin, Ming Wong, Wu Tsang and Wen Hsin illustrated through media and parody that gender and even race were performances. In addition to blatant sex, the more conceptual works of Chen Chien-Pei, Chuang Chih-Wei and Samson Young became metaphors for the living conditions of a marginalised community.
Meanwhile, Tao Hui, Su Hui-Yu and Hou Chun-Ming, through their own and others’ bodies, re-examined the sense of taboo and submission that came into being when repressed by power. The works of Wang Haiyang, Hsi Shih-Pin and Wang Liang-Yin, along with fan magazines from Tam Ho that bordered on the mundane, showed an examination of art that transcended the narrow definition of tongzhi.
Although the majority of the artists were male Chinese, which did not fit the exhibition’s positioning of representing Asia and the LGBTQ community, the curator’s strategy of approaching from the middle turned collections that reflected personal tastes into exhibits that were publicly appealing, widening the spectrum of tongzhi art.

Placed in the middle of the entrance, Shiy De-Jinn’s two oil portrait paintings Young Man in Yellow Shirt (1967) and Young Woman in Red Dress (1960), from his Taipei period (1952-62), caused a sensation due to the familiarity of the faces. Shiy, born in Sichuan but based in Taiwan after the civil war, used his solid foundation in sketching, along with the sharp, direct brushstrokes and strong colour contrasts of fauvism, to both continue the legacy of his forebears and innovate. The two paintings produced a dichotomy, which could be seen as a biological-sex footnote to the diversification of tongzhi art, and counterbalanced the male domination of the exhibition. However, the works showed obvious favouritism towards the subjects of the paintings.

Although Shiy worked during Taiwan’s highly repressive martial-law era, his homosexuality was an open secret during his lifetime. The bitter love story between Shiy and the young man dressed in yellow in the painting – his model and assistant Chuang Jia-Cun – was common knowledge. This dishevelled young man with a sideways glance had his right hand on his waist. The blue background made his shirt pop, highlighting his rebelliousness and unapproachability. As for The Young Woman in the Red Dress, Shiy did not deviate from his bold style, such as using blue in the whites of the eyes, but the girl seems out of place in her surroundings, and the painter treated her as a still object. Besides the reedy, asexual physique, which might hint at queerness, the desire and emotion expressed in the two paintings were poles apart.

For How We Perceived a Life《對於我們如何看待生活》by Wu Tsang, Single-frequency video, 3 minutes 45 seconds, 2012. Courtesy the artist and Museum of Contemporary Art, Taipei.

Setting aside the penises and muscles, most emblematic of the queer spirit in the exhibition were two videos by Wu Tsang, Duilian (2016) and For How We Perceived a Life (2012). Both used a strategy of intertextuality, choosing an existing text as a starting
point – respectively, Jennie Livingston’s 1990 documentary Paris is Burning and the biography of anti-Qing revolutionary martyr Qiu Jin – but used the body to tell the ambiguity that diverged from the original text. For How We Perceived a Life was a destructive reality show – there was no superfluous setting or scenery in the rehearsal room. The five actors, including Tsang herself, were of different sizes and shapes. They
exaggerated the emotions of the original text through markings denoting ethnic and gender differences on their bodies, while eradicating the stereotypes applied to them in reality.

The semi-fictional Duilian, on the other hand, transformed the life, death, love and sensuality of a revolutionary martyr obscured by the conventional historical narrative
into dream-like monologues and lovers’ murmurs. Tsang compared her own interracial and transgender identity with Qiu, who once disguised herself as a man. The story bore no resemblance to historical facts, but amplified the intimate physical contact between Qiu and a lesbian partner: sparring, writing, combing each other’s hair. Despite the orientalist stylings of the costume and scenery, the story deliberately mixed English, Cantonese and Tagalog but not Putonghua in its soundtrack, questioning the pureness of Chineseness.

Compared to Tsang’s ease, Tao Hui’s Talk About the Body (2013) took a subtler approach. The male artist put on a burqa to play a Muslim woman, with a Koran in her hands, sitting on the edge of a bed in isolation, her eyes downcast, talking about her bodily characteristics and genealogy as modern, urban Han sat or stood around her, not only invading her private space but also indifferent to her testimony. Through roleplay and simple production, the work pondered the Sinocentrism rarely examined by contemporary Chinese artists.

Works related to gender issues are sometimes too preachy, and become an accomplice of moral discipline. Since the 1990s, Hou Chun-Ming has repeatedly broken taboos. His Body Chart series of recent years turned self-indulgence into a collective theme. The exhibition presented only the Manhole pictures (2014-16) from the series: using the hole as a metaphor for maleness, they invert the sexual formula of phallocentrism, highlighting the way desire stems from an absence. Through two days of interviews, respondents created graffiti with their bodies, with the result transcending defintions of heterosexual, homosexual, bisexual or transgender, becoming a life history reconstructed in accordance with perceptions and desire. The illustrations and text graphically depict sexual organs, gay sex and intimate or violent relationships: penises cease to be just representations of physical males but of “sperm and blood”, tiny crushed memories spread all over the body. Hou deliberately arranged for the participants to graffiti in the nude on a tatami, then reassembled the fragmented feelings of the author of the graffiti to produce a double-sided hanging scroll. Traditional portraits are usually created by a painter through careful objective observation to display the mental state of the subject. But Body Chart broke the distinction between subject and object, and even refuted the notion that the person in the portrait was a complete, independent subject. The “painter” and “owner”, kneeling, crawling and lying on the tatami, became closely related due to their intimate interaction. The painting was displayed as a double-sided hanging scroll; the queer character of the work did not lie in stated sexual orientation or identity but in the joining together of the “owner” and the “painter”.

The curator juxtaposed the paper-cut work of Xi Ya Die with the works of Hou Chun-Ming, underlining the contrasts in the approaches and contexts of the two artists. Art-school graduate Hou started from modern art-concepts and then learned from folk traditions; Xi Ya Die, who grew up in Shanxi, learned paper-cutting techniques from his mother and then encountered modern art. Unlike urban gay people who pursued a gay identity assiduously, Xi Ya Die was in a heterosexual marriage while at the same time active in gay circles in Beijing. Train (2017) in the exhibition vividly portrayed his double enlightenment through sex and modernity – the young, naive Xi Ya Die took a train from the countryside to the city, was seduced by the ticket inspector and half-reluctantly experienced his first sexual encounter amid the rumbling of the wheels. Explicit descriptions were hidden within decorative patterns, while autobiographical narrative pictures of different times and spaces interspersed cleverly in a two-dimensional plane. The birds on the green ceramic, the rabbit holding a signal flag, the monkey stealing a peach: common folk-art symbols suddenly became filled with sexual innuendo. Xi Ya Die not only enriched the artistic lexicon of traditional paper cutting but also broke through the metropolitan aesthetics of tongzhi culture. A queerer interpretation lies in Xi Ya Die’s origins in rural mainland China, positioning him as the other in the modern, Taiwan-centric exhibition. The earliest works on display were from the 1950s, when “tongzhi modernity gradually formed, aspiring to be the ‘progressive’ West”, according to the exhibition brochure, underscoring Taiwan’s post-war situation.

The exhibition followed the conventional meaning of “tongzhi”, encompassing lesbian, gay, bisexual and transgender, but it ignored the deconstructive strategy of “queer” as a verb. Several ambiguous works radicalised the cultural operation of identity politics, especially as an alternative reflection of class and nation outside the tongzhi mainstream. An exhibition like Spectrosynthesis, which contemplates the essentialism and gender stereotypes concealed by identity politics, could unleash the invaluable experimental side of art.