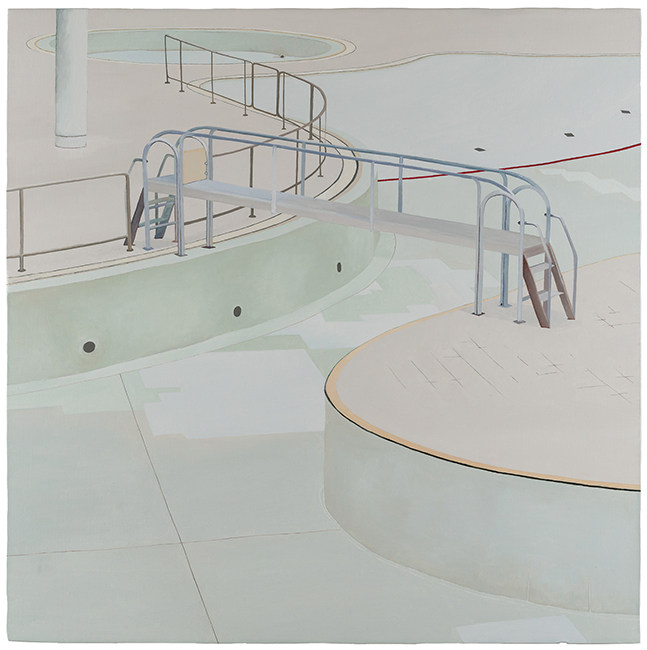 The muted, pastel hues of emerging Hong Kong artist Elpis Chow give her paintings a timeless quality. To viewers who are Hong Kong natives, the paintings portray easily recognisable surroundings, featuring common objects such as fences around a construction site at the side of the pavement, the iconic orange rubbish bins, security guard booths, and red and yellow bricks on the street.

Despite the presence of familiar objects from the city, the paintings also look nothing like Hong Kong, with their vast empty spaces generating an uncanny feeling. It’s unusual for a densely populated city with notoriously cramped living spaces to feature such open spaces with not a single person in sight. The crisp lines and modernist aesthetics of the architecture depicted in paintings such as Invisible Wall and Dim Scene recall those of American artist Ed Ruscha’s low-rise suburban communities, while Vacant is reminiscent of British artist David Hockney’s Californian swimming pools. The interior and exterior
settings shown in Chow’s paintings elevate the mundane and banal side of everyday existence to the centre of attention.

The artist pays particular attention to observing the intricate details often ignored in quotidian experiences. “The paintings are drawn from places that she knows well by heart but never cared to look, until now,” says a statement accompanying the show.

In Chow’s paintings, human beings are depicted mostly as lone figures. These figures are not particularly animated, and look as if they are minding their own business. In Peel, the unsmiling figure in a reflection in what seems to be a bathroom mirror becomes the focal point, looking fatigued against a monotonous backdrop. The sheer stillness makes the paintings look either calm or eerily alienating. Animal figures also gather in them, but they are also rather motionless. By highlighting the paradox between the familiar and the unfamiliar, the artist urges viewers, especially those also living in Hong Kong, to
re-examine their daily lives.