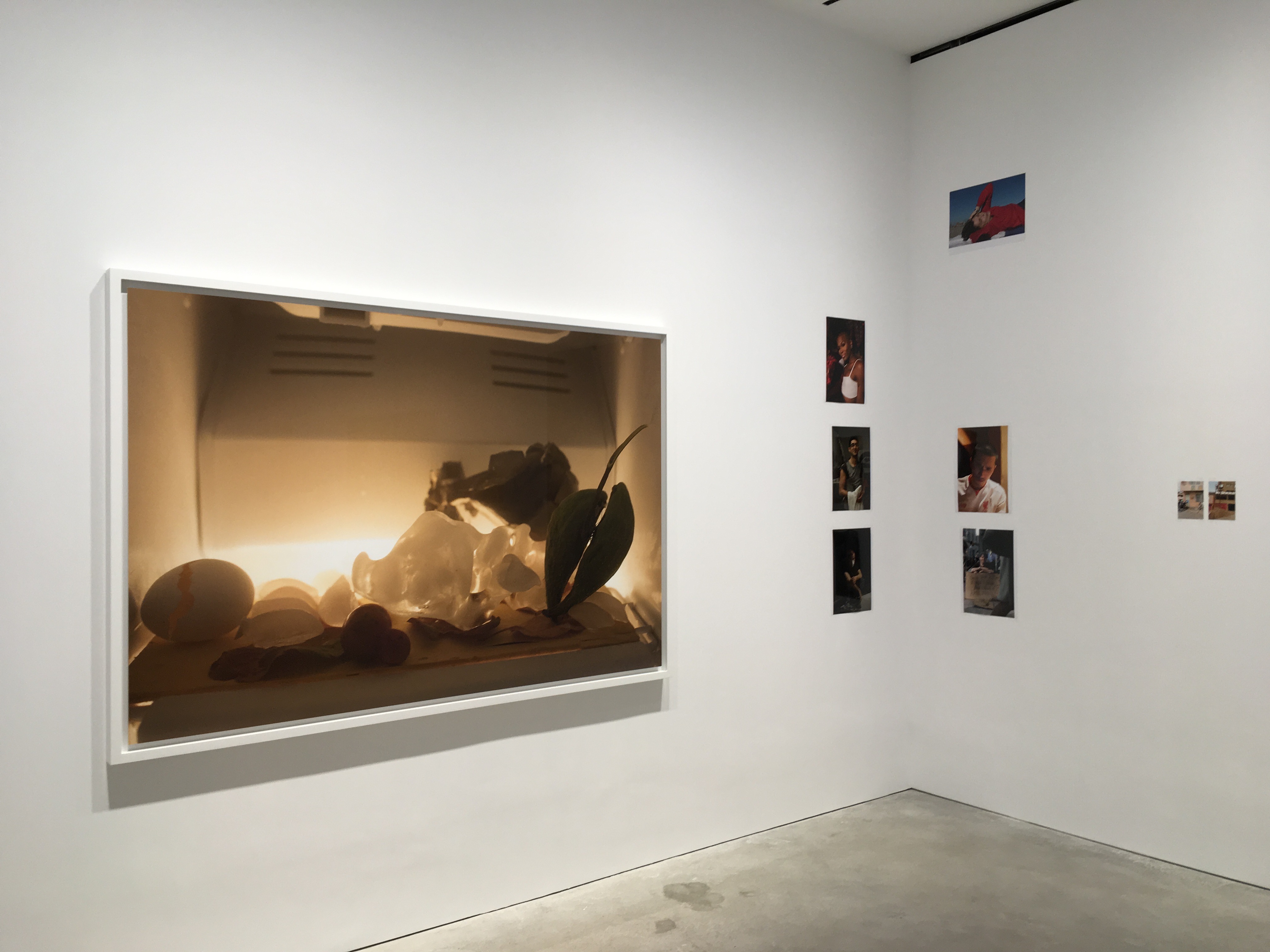 Although his photographs had graced the pages of magazines like iD and Interview magazine, for a couple of decades it was at nightclub Berghain’s Panorama Bar in Berlin that the work of Wolfgang Tillmans really seared itself on my mind. The work in question, Phillip III (1993), depicted a man exposing his anus with his hand. The Panorama Bar, known for its hedonism, where music, dance and sex dissolve into one another and clubbers can party the night away with complete abandon and without judgement, was the perfect venue for his work. What struck me wasn’t that the work was confrontational or provocative – Robert Mapplethorpe paved the way for works of this nature in the late 1970s and 80s, drawing the sting from homoerotic art. Instead it was the unapologetic directness of the work, the raw honesty and frankness of it, that impressed me most. Throughout his three-decade career photographing a diversity of subjects, Tillmans’ has demonstrated a commitment to exploring and depicting truth, blurring the boundaries between art and documentary photography.

Music and clubbing have been central to Tillmans’ work from the outset of his career. After picking up his first camera at the age of 20, it was in documenting the late 80s and 90s club counter-culture that he rose to recognition. Back then, the young photographer was merely taking pictures of friends in Hamburg in a scene that they were part of; the dancefloor was where he felt the biggest energy. But his subjective photographs also captured and arguably defined an era, reflecting the spirit of the times and influencing a generation of other young photographers in his wake. They were celebratory works expressing togetherness and the ideal of a utopia that was infused in club culture of the 80s and 90s.

“Where other people maybe saw just pictures of partying and hedonism, I saw body studies, and pictures of trance and ecstasy in an art-historical context of hundreds of years of painting: moments of ecstasy and revelry and revelation,” he says by phone from his Berlin studio; he has divided his time between London and Berlin since 2007. “So this interest in almost something spiritual and the everyday is really at the foundation of my work.”

It’s hard to define Tillmans’ style. He has moved fluidly between genres, including portraiture, street shots, studio shots, still lifes, urban scenes, close-ups of mundane details and abstract photos. Everything and anything can be a photograph, as he suggested with the title of his 2003 Tate Britain retrospective, If One Thing Matters, Everything Matters. His photographs look almost offhand, so casual that they skim the surface. He captures scenes that look like they have been noticed in passing, but that are familiar and universal, accessible to all who look at them. Tillmans is not one for dramatic or grand gestures; it is the quiet moments that he brings into focus, freezing and capturing time, conveying intensity or lending beauty to the otherwise overlooked. His photographs are striking for their normality, stripped of harsh lighting or affected poses, printed without the aid of cropping or Photoshop, so taken for granted in photography today.

“I want people who see my work to trust that what landed on the film is what’s in the picture,” he says. The idea of truth in photography, so anathema to our post-truth era when photographs are manipulated, doctored and filtered, crops up several times in our conversation. Yes, photographs can lie – but, says Tillmans, “I think photographs are so genuinely true to their intentions, true to the mind behind the camera. Photography always depicts the intentions behind a photograph.”

Tillmans’ intention is to depict “what it feels like to be alive today”, frank and unfiltered. Viewers see life through the eyes of the artist: his friends, places he’s visited, the remains of a party, a box of bottles of HIV medication. In choosing what to photograph and how to photograph it, he reveals his interests, what he sees and the way he sees it, creating an intimacy between viewer, subject and photographer.

“But I don’t see my work as a diary or a window into my life; it’s more a window through my eyes,” he says, dismissing the common misconception that his work is diaristic. Through this window he reframes as beautiful and poetic the mundane, the discarded and scenes taken for granted.

There is an understated sensuality to some of Tillmans’ work, especially his still lifes, which pay attention to the smallest of details; although they can look casual, there is a studied formalism informed by a rich visual language and by art history. A pair of crumpled, discarded jeans draped over a bannister (grey jeans over stair post, 1991) seem to still radiate the warmth of the body they were just peeled from, the folds and draping of the composition evocative of a baroque painting. astro crusto a (2012) is an intensely detailed, vivid high-resolution photo of freshly peeled crab shell with a single fly feasting on the remains, with every hair and texture of carapace and claw in sharp focus; hinting at decay, it references Dutch still life painting. In Water Melon Still Life (2012), a large slice of watermelon rind sits underneath a plate stained with red juice like a blot of blood; erotic and fleshy, it conjures up memories of summer heat, tanned fingers and bare arms dripping sticky juice. We might be living in an era of image saturation, when anyone with a smartphone can claim to be a photographer, and images are consumed and discarded at an unprecedented pace, but Tillmans’ images are evidence of the enduring transformative power of photography – of a photograph’s ability to not just convey a narrative but to also engage the senses and imagination.

His idiosyncratic installation style and singular take on the world around him have captured the attention of art institutions internationally, with solo shows at venues including New York’s MoMA PS1, Berlin’s Hamburger Bahnhof and recently London’s Tate Modern, as well as winning him the Turner Prize in 2000: the first photographic artist and the first non-British artist to do so. The 2017 Tate exhibition rejected institutional norms: photos in various sizes, framed and unframed, were tacked, taped or hung on the walls of 14 rooms in seemingly random ensembles, like a forensic study of lives, with no single photo being accorded more importance than others.

This March Tillmans will follow up the exhibition on a smaller scale at Zwirner Gallery in Hong Kong. His first show in the city, it will similarly bring together a collection of works across all genres from his three-decade career, including depictions of public and private spaces, natural landscapes, portraits, abstract photos, folded sheets of photographic paper that look like sculptural sheets of metal, and new abstract and text pictures that emerged from Tillmans’ exploration and study of the brain and how it deals with deception and truth. “And pictures of Hong Kong that I took in 1993 and this year, so 25 years in between,” he says. “Photographs of the Macau-China border taken in 1993 and pictures of the Hong Kong-China border in 2018. I have an interest in borders”.

Indeed, that preoccupation has become something of a recurring theme in his work and private life lately. As much as Tillmans has made his career from photographing moments culled from ordinary life, his work has also recently acquired a sense of political urgency. He is a vocal – and visual – backer of the anti-Brexit campaign and staunch EU supporter, and engages with issues such as climate change, gay rights and migration. He created a series of posters available for home printing for the Remain campaign, including an aerial photograph of a coastline bearing the John Donne quote “No man is an island. No country by itself” that became a Remain campaign slogan. The personal is political and vice versa for Tillmans, who feels a sense of responsibility to address and engage with social and political causes through his art.

“I have joy making work, but the main reason why I do what I do is because I want to be involved in society, and I find that political and social and cultural activism has allowed me freedom to live my life, be it as a gay person, as a liberal person or as a spiritually non-aligned person,” he says. “All these freedoms have been fought for by generations of other people; they have not come through indifference.”

The idea of inclusiveness, the spirit of togetherness that he has expressed from
his earliest club photos, is extended to his political and personal values. “You can have fun and be interested in the beautiful and in a night of abandonment in a nightclub, and in formal, aesthetic things. But it’s not a contradiction to also feel you have a sense of responsibility to protect what has been fought for by generations of anti-authoritarian people before us. Because one thing that is clear is that all progress in
society can be reversed.”

Tillmans uses the camera lens as a magnifying glass, encouraging us to look closer, to pay attention to details, to the world around us, to the personal and the political – and to find the poetic in the everyday.