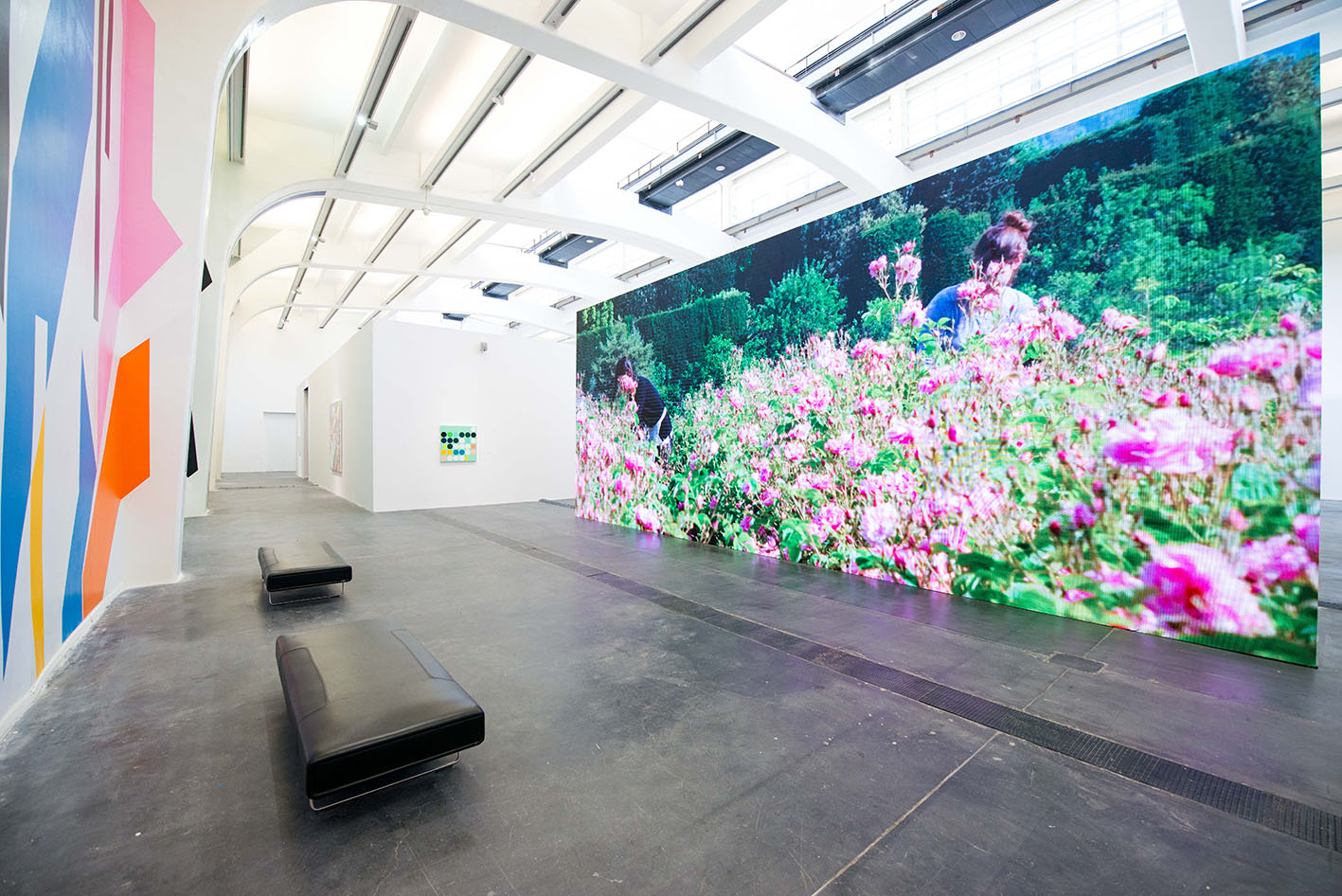 The Importance of Conversation

Conversations and research form the bedrock of Sarah Morris’s artistic practice. The artist conceives most of her creative ideas through conversations, followed by research to give shape to those thoughts, and then even more conversations to realise a work. These conversations involve fellow artists, curators and potential film subjects. But the spark for new ideas for artistic projects most regularly comes from conversations with the group of culturally diverse young professional studio assistants from a variety of disciplines that she surrounds herself with.

The New York-based artist was in Beijing in March for the opening of her solo show at the Ullens Center for Contemporary Art, Sarah Morris: Odysseus Factor. Resembling a mid-career retrospective, it is one of her biggest shows to date. It also marks a decade since Morris came to China to shoot her film Beijing (2008) about the Olympics. Ten years is also the amount of time it took Odysseus to sail home to Ithaca and the duration of the Trojan war, hence the show’s title.

Morris is busy working on several projects. In late May she will be in Hong Kong to attend the opening of her solo show at White Cube. After Beijing, she and her team travelled to Japan to shoot her next film, which has two main elements: the spectacle that surrounds the blooming of the sakura cherry blossoms; and an interview with molecular biologist Shinya Yamanaka, a Nobel Prize winner, about a controversial new technology to create stem cells. She is also working on a project for the Convention Center for Art Basel Miami in December, a very large-scale site-specific ceramics facade, produced in Guadalajara, Mexico.

All of Morris’s 14 films are on show at the UCCA, spanning the two decades from 1998 to 2017. Most of the rest of the exhibition comprises her paintings, mostly consisting of geometric shapes and precisely drawn lines, with a limited palette per painting of solid colours. Posters designed in collaboration with M/M Paris to promote her films and two large-scale wall paintings round out the show. Dr Caligari [2] (2018), a site-specific wall painting over nine metres long, was created for the UCCA’s monumental factory space.

For Morris, her films and paintings form a cohesive whole, although each is different in the state of mind it requires, the time it takes to execute and the collaborative effort involved. “They allow for each other to exist and they also constantly inform each other,” she says. There are also overlaps between the two practices in colour palettes and titles.Morris’s key themes include power structures, the movement of capital, corruption and conspiracy. Rather than following the trend of artists dealing with the marginal and the alternative, from the beginning of her career Morris has been interested in the idea of “trying to deal with these very mainstream forces – to go right to the centre”. This finds expression in her focus on the self-involved world of Hollywood in Los Angeles (2004); the juggernaut that is the Olympics, described by Morris as “political, corrupt, super-commercial and artificial” in 1972 and Beijing (both 2008); how power is manifested in a city’s architecture in AM/PM (1999) and Points on a Line (2010); and how the cash that flows in from selling “a fantasy” or “a dream” via luxury goods enables the building of an art museum by a starchitect like Frank Gehry, in her film commissioned by Suzanne Pagé and the Fondation Louis Vuitton, Strange Magic (2014). However, we never feel outright critique, only subtle hints at something dark or corrupt. “If there is a conspiracy, I’m not saying I know what it is,” she says.

Morris’s films are neither documentary nor entirely fictional. They occupy a space between the two, forcing the viewer to grapple with the images seen and come up with some kind of understanding. Devoid of a definite narrative, defying logic and a clear ending, we see scenes jump from one to the next, from macro to micro and back again. In Beijing (2008), for example, we see preparations and practice for the Olympics, followed by a close-up of a woman collecting plastic bottles for recycling in the vicinity of the Bird’s Nest Stadium. These scenes seem both random and yet interconnected. For example, we might draw the conclusion that large sports events create a lot of additional waste. Morris wants her audience to come to their own conclusions. “The viewer is actually producing the meaning. Of course, I try to direct it when I can,” she says.

Instead of verbal commentary, highly repetitive electronic music forms the audio background to most of Morris’s films, exacerbating the absence of clues. The artist considers music an important element in her films. All originally composed by artist Liam Gillick, who is familiar with some of the themes in each film, the music is not written to accompany specific images. Then Morris takes the composed elements and pairs them with visual material, but she just as easily “might run counter to the image”, she says, questioning the implications of the scene. For example, in Rio (2012), the artist matches footage from an assembly line in a beer factory with ominous-sounding music. Elsewhere a disturbing scene, in which a seemingly dead horse is carried off by a Jockey Club truck, comes paired with gentle music.

The title of her latest show, at White Cube Hong Kong, Your Words are Mine, reflects her belief that “conversation is a very powerful thing. This issue of speech and the veracity of speech is obviously being contested a lot right now. Words are very important and very beautiful.” Building on this theme, Morris is showing a series of her latest paintings, which she refers to as “sound graphs”, with undulating lines that resemble hills and mountains. The series was inspired by a remark made by Alexander Kluge in her film Finite and Infinite Games (2017) while discussing New German cinema, when he momentarily veered off-script. His words where converted into the first sound graph painting, So in a sense it’s abstract as no painting will ever be [Sound 3] (2017), which is on show at the UCCA. Other works at White Cube will include the film Abu Dhabi (2016) and several paintings that capture the colours of the desert city.

For Morris “there is meaning in every surface” and “meaning is there to be mined” by the audience. She believes our eyes are already trained to do so; she’s just trying to give us a helping hand.