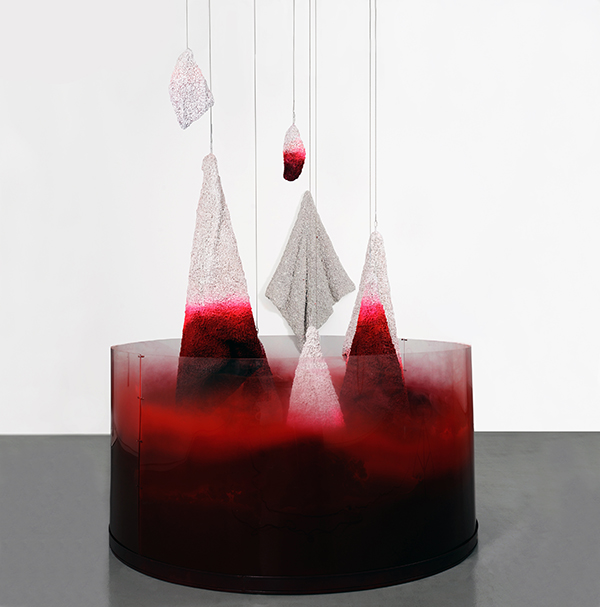 The aptly named Red States showcased 17 new works and smaller existing pieces and studies by Singaporean artist Jane Lee, revolving around the boldest of all colours. Alluring and provocative, the exhibition invited its audience to contemplate the emotions and connotations that the colour red conjures. More importantly, it provided an insight into Lee’s innovative practice and artistic virtuosity for the past 15 years, highlighting her vastly tactile signature techniques, including coiling, layering, mixing and stacking.

At the entrance, visitors were greeted by a large heap of tangled red canvas threads, a prelude of what was to come. The rectangular piece The Story of Canvas #2, hanging in the main gallery, is made of more layers of canvas threads, giving it an organic, fibrous texture. The Story of Canvas #1 and The Story of Canvas #1a followed – compositions of roundels of varying sizes made from coils of red canvas strips, strategically arranged and spanning 500cm along the wall. These works prompt the viewer to abandon all preconceived notions regarding the traditional roles paint and canvas play; having now taken centre stage as lead instead of supporting characters, they become active variables that can be reimagined and re-enacted. This theme ran throughout the show.

In a similar manner, in Pond Series, an installation in a darkened room, the artist breaks canvas out of its conventional quadrilateral frame. Confined within a round enclosure, several draped forms are suspended low from the ceiling, weighty with grids of paint layered over their contoured surfaces, recalling the warp and weft of fabric. The colours change gradually from off-white to a deep bloody red pooling towards the bottom, which could be interpreted as ominous and unsettling.

Other notable works illustrated Lee’s mastery over paint and canvas as media, challenging the viewer to reconsider them in new roles while also revealing her background in fashion. They include Fetish, where twisted cords of dried paint are used in a technique not unlike couching in embroidery; and Stack Up 1 and Stack Up 2, works of expertly cut, piled-up canvas squares, only the sides of which are visible.

The lower level featured a selection of 10 earlier works, as well as studies from Lee’s studio shown for the first time, many of them prototypes for her larger works. They chronicle Lee’s journey for the past decade and a half, tracing her artistic evolution and providing a behind-the-scenes look at her processes of experimentation.

Bold and unapologetic, the exhibition was a labour of love, revealing an artist who has put her heart and soul into her art-making. It was also a demonstration of Lee’s technical achievements to date, a culmination of highs that have defined her career. Constantly exploring unconventional ways to reinvent the roles art media play and the ways they interact with their surrounding space, Lee has given them lives of their own. In her work, the sum of the parts is greater than the whole.