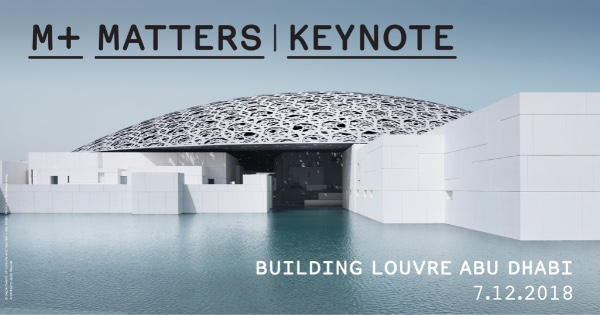 In this lecture organised by M+, Manuel Rabaté, Director of Louvre Abu Dhabi, discusses the building of this twenty-first-century encyclopedic museum as ‘a museum of experimentation, and a museum of meeting points’.

Louvre Abu Dhabi opened in November 2017 following a decade of planning and construction. It is the result of a collegial effort between France and the United Arab Emirates to create a visionary museum that inherits the tradition of the French institution while embracing the multicultural dynamics of the Arab world. This aspiration pervades the Jean Nouvel–designed building, which features a low-slung dome that evokes the architecture of a mosque and a mausoleum. The dome is pierced with openings and resembles interwoven palm leaves assembled into a lattice, proposing a contemporary reading of a traditional form. At the core of the museum’s mission is the notion of universal human values, which is enacted through collecting and programming activities that bridge the Louvre’s long history with the distinctive cultural context of Abu Dhabi. Manuel Rabaté is deeply connected with Louvre Abu Dhabi, through his work at Agence France-Muséums to lay the groundwork for the project, and now as the museum’s first director.

‘Building Louvre Abu Dhabi’ is the second talk in the M+ Matters | Keynote series, which invites international thinkers and practitioners to share their experiences and insights into the development of influential projects that have defined the cultural landscape in the twenty-first century.

Language
The talk will be conducted in English, with simultaneous interpretation in Cantonese.

This talk is a partner programme of Business of Design Week.