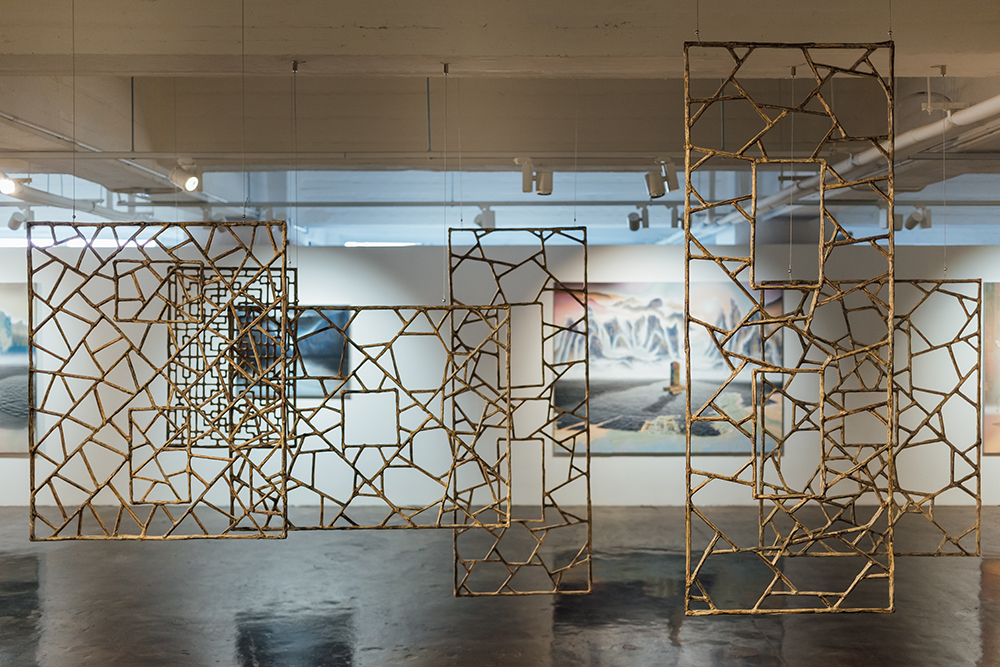 It is hard to think of Gordon Cheung’s worlds as homes. But his landscapes, often mountainous, vast and empty, yet shimmering and abundant with flowers, might begin to look eerily familiar as technology blurs our reality and modernity transforms or even erases our living spaces.

Home at Galerie Huit is a body of mixed-media paintings and sculptures that raises questions about the meaning of a domicile: a place of birth, a residence, a source of heritage or identity, or a land that is conquered by an empire.

Cheung reflects on his personal story as a Brit born to Chinese immigrants who left Hong Kong, a place that many fondly consider home despite its political turmoil. He sees this as part of a volatile global situation that has created complex individuals who live in an in-between space, caught between rapidly changing layers of history that define, at least temporarily, as they confuse identities. His work asks what we are becoming as our societies change, and what we could become if they disappeared.

“This signifies my return to a place that means family heritage, yet at the same time feels distant because of the changes that have come along with its history, economy and society,” he says. “I am fascinated by the history of Hong Kong. I wanted to make a show about the general notions of what a home means, from the family to a nation state. I am providing a space to look at and think about the geopolitical histories that have occurred and are occurring.

“Being both Chinese and British, I witnessed the 1997 handover of the then colonised Hong Kong. My dual identity prompts me to think about the definition of home, where and what it is, and the narratives of conquest. Hong Kong is often used as a backdrop in science fiction to explore the intersections of old and new architecture. The compressed, futuristic city is composed of layered expressions of humanity, history and civilisation, forming a feedback loop that defines collectively but also simultaneously defines our identities.”

Cheung expresses this idea with mixed-media canvases and sculptures of hanging Chinese window structures made of paper and bamboo. Still lifes of tulips, dreamlike and glowing, as if picked from the fields of a dystopian futuristic landscape, allude to the tulip mania of the Dutch Golden Age, the first recorded economic bubble, which gave birth to the first conglomerate: the Dutch East India Company. At the base of the images are what appear to be abstract shapes that mark artificial islands built by China as outposts to protect its trade, which are contested by several nations.

Cheung shows the paradox of modern China’s abandonment of communism in its trailblazing rush towards capitalism, which has left it trapped between the two, as age-old narratives shaped by its ancient civilisation are erased overnight by the wrecking ball of fast business.

“The sculptures of windows made from bamboo and financial newspapers refer to homes in China with traditional window designs that were demolished for rapid urbanisation,” says Cheung. “Here they hover between states of being, suggesting a ghost architecture that would have supported them. They act as a demarcation between communism and what might be paradoxically called communist capitalism. How can a domestic domicile, or a place of heritage, be powerlessly torn down and replaced with a shopping mall or a skyscraper, all in the name of progress?”

Admiring Cheung’s landscapes feels like staring across the border of our seemingly tangible environments into this in-between space. It often looks like a distant planet aglow with the lights of dawn or neon, as solar winds spark auroras: a place where time and space are very different. Cheung spray-paints his work to add lens flares and halos that make the landscape cosmic and hallucinatory, but also meditative enough to challenge our perceptions of reality. Throughout it is carpeted by a moonscape of shifting sands, reminding us how fragile everything is.

Cheung’s trademark use of the Financial Times newspaper finds a new significance in this body of work, as he links myths to the geopolitics that have long defined our homes. His work addresses the existential problems of nations and individuals in this era of empires and global business in constant flux. It asks where we will be left as technology helps these capitalist forces flow through our minds in our internet-connected, social media-saturated lives.

“The Financial Times was first used in my work over 20 years ago, in the last century at the advent of the information and digital revolution, with the rise of the internet,” he says. “To me the use of stock market numbers was a direct symbol of the globalised landscape we have found ourselves in. The existential question of ‘Who, why and what am I?’ is one of the universal questions of consciousness, and also the germinating seed of transformation that I layer into my work. The interrelated motifs in my work are all fused with a profound philosophical enquiry and compulsion to find expression of a human condition that at best conveys a poetic and spiritual yearning. What is the meaning of home in an age where the world order is changing at an accelerated speed? In these in-between worlds, we might also ask existential questions about what the very purpose of our lives is.”