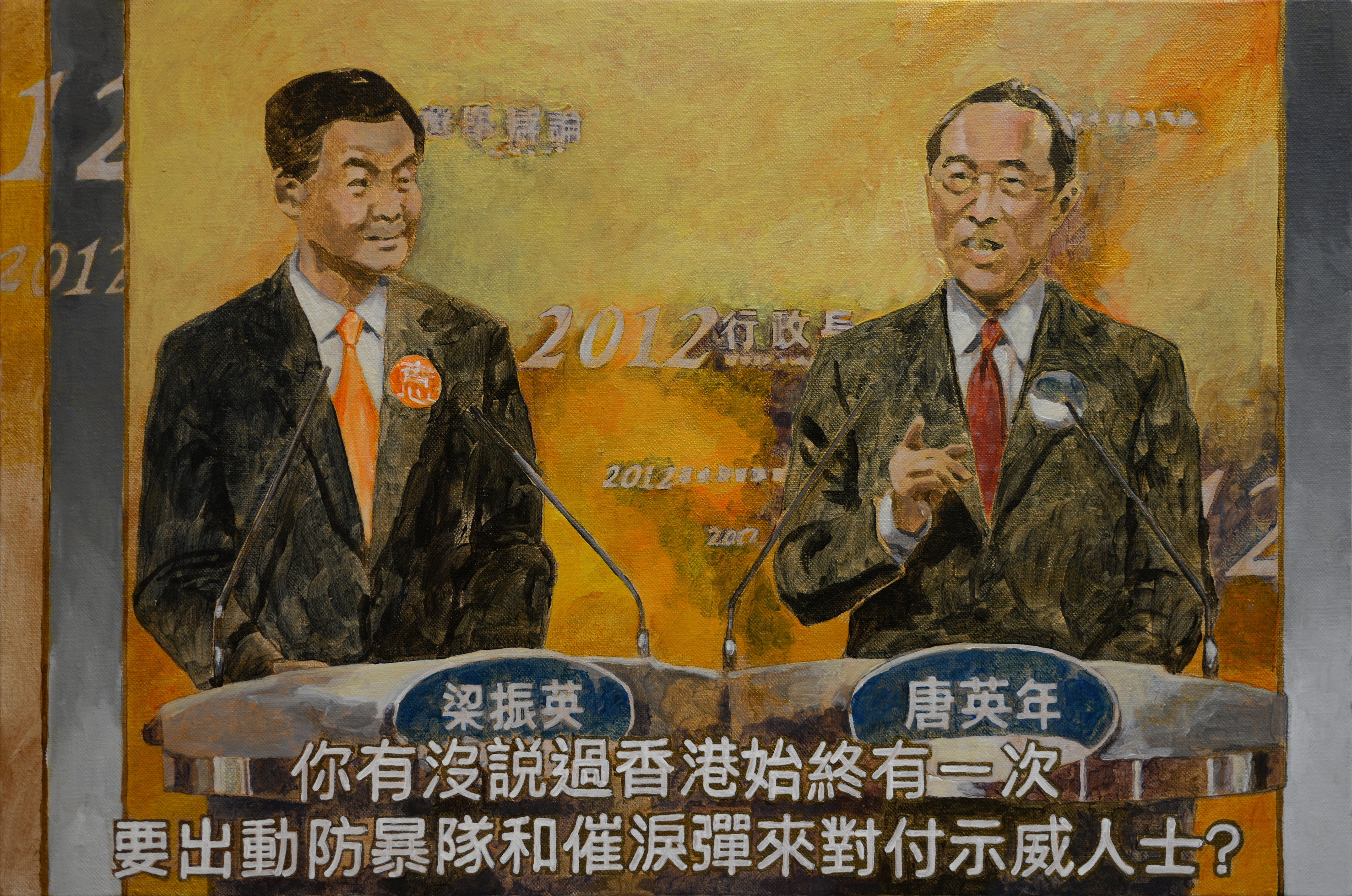 I want my identity back, China is not ruled by Chinese anyway, History can be changed, Our city changed irrevocably and You think a Hong Kong triad can outlive a Mainland businessmen? make up a few of the subtitles of the paintings of film stills for which artist Chow Chun Fai is known. Chow’s politics are hardly concealed in these works, for which he skilfully recreates mises-en-scene from Hong Kong and mainland Chinese films, including snippets of dialogue that allude to aspects of the Sino-Hong Kong relationship. Isolated, removed and rendered in paint, the subtitles lay bare their connotations of authority, nationalism, localism and fear, ringing in the ears and revealing the filmic medium as an expression of both social concern and soft power.

Active in performance, Chow is also chairman of the Fotanian Artist Village. Five years ago he made an unsuccessful run in the Hong Kong Legislative Council election in the Sports, Performing Arts, Culture and Publication constituency. His works were recently on view in Tale of the Wonderland at Blindspot Gallery (September 19 to November 11, 2017), a group exhibition that constructs a narrative of post-handover Hong Kong through Lewis Carroll’s Victorian fantasy novel.

Elliat Albrecht: Why should artists be in government? In a hypothetical, possibly utopian reality, what would a government of artists look like? Chow Chun Fai: It could be chaos to have a government of artists. But there were two main reasons for me to run in the 2012 Legco election. The first was to have more balanced decisions in the policy-making process. My slogan was “Cultural Right”. Each government decision should be made under an equilibrium of different voices, including culture. For instance, artists’ studios should not be ignored in the policy of factory revitalisation. That’s why the department I always confront is the Development Bureau, not the Arts [Development] Council. The second reason is the unfair election system. Half of Legco is elected by functional constituencies [professional and special interest groups], and most of those seats were won by pro-Beijing candidates. Most artists didn’t know they don’t had the right to vote until I became the candidate.

EA: You have an expansive bookshelf in your studio. Which author’s works do you pull out most often? CCF: I was influenced by Italo Calvino’s works when I was doing my MFA [at the Chinese University of Hong Kong]. At that time I was working on photo installations with Renaissance images like Leonardo da Vinci’s Last Supper. My over-interpretation of the Renaissance masterworks, as Calvino might agree, is inevitable, in the process of both making new art and reading old classics. The other reason I always go back to Calvino’s books is the political situation. He experienced a period of fascist dictatorship. In 1943 he wrote: “Fables come in times of oppression. When a man cannot deliver his thoughts clearly, he expresses himself through fables.” And now I understand more about the works of some mainland Chinese contemporary artists, which I didn’t before.

EA: What are you reading right now? CCF: I’m reading about Hieronymus Bosch. The Bosch Research and Conservation Project published two big books last year, the 500th anniversary of the artist’s death. The team there spent years preparing for the anniversary exhibition, not only examining the sketches beneath the paint; more importantly they went through all the bureaucracy of the museums all over the world who own the masterpieces to discover more about the artist’s intentions. They discovered that some of his paintings were done by his followers.

EA: In September 2001 you staged Joint Funeral of Chow & Kwan at the Cattle Depot Artist Village, where you burned your old works, something that many artists have historically done as an act of rebirth. Given the overt political overtones of your work, did this act have any connotations of book-burning in China? CCF: I may interpret burning in this way: in traditional funerals in Hong Kong, paper money and paper daily necessities are burned in order to send them to the world where ancestors are. And why does this other world exist: why do we expect a utopia? In 2001, I was thinking of survival: how to survive as an artist.

So in the exhibition Kwan and I were showing ourselves instead of showing art objects.  A funeral could be an exhibition of a man.

EA: ​The group exhibition​ Tale of the Wonderland at Blindspot Gallery includes​ some of your​ paintings of poignant speeches made by Hong Kong’s various chief executives of the past 20 years​,​ captioned by ​​painted s​ubtitles​​. Which moments did you isolate to paint, and why? CCF: For me, “political art” has always been an ineffective means for expressing opinions. Why should an artist use art to show concern about social issues? It is more effective to cast votes or join demonstrations. Politics and art are also contrasting and opposing in nature and agenda. Politics have to be concise and clear for the mass media and general public, while art is more meandering and thought-provoking. Political events embrace content that is swift, direct and influential. The long creative process behind each art work prevents it from being a timely response to the fast-changing political atmosphere.

When I am looking for scenes from films or news clips, I try to twist these ineffective means into a stronger statement. The news becomes useless as a piece of news after 24 hours, but it could still be a piece of evidence against a lying politician.

EA: As chairman of the Fotanian Artist Village, do you think the model of studios in abandoned industrial areas is sustainable or reproducible in Hong Kong? Other cities are constructing temporary, mobile studios on under-used land. Is there a creative solution to the issue of affordability and encroaching real-estate developers? CCF: No. To be honest the Fotanian model doesn’t exist any more. At the early stage we thought we might have to leave when galleries and cafes opened in the area. But even galleries cannot survive in Fo Tan because of government policy. Many cultural activities, like exhibitions, band shows and open studios, are considered violations of industrial land use.

EA: What are you working on next? CCF: I am working on paid tears. There was a report in 2015 that professional paid audiences earn an impressive income of RMB180 million a year in Beijing. At the opening of my exhibition on August 20, 2015, any visitor who could act as if they were moved to tears standing in front of my work would got a reward of HK$500. In two hours I spent HK$5,500. Now I am showing paintings of crying audience members on mainland TV show I Am a Singer at N3 Gallery in Beijing.