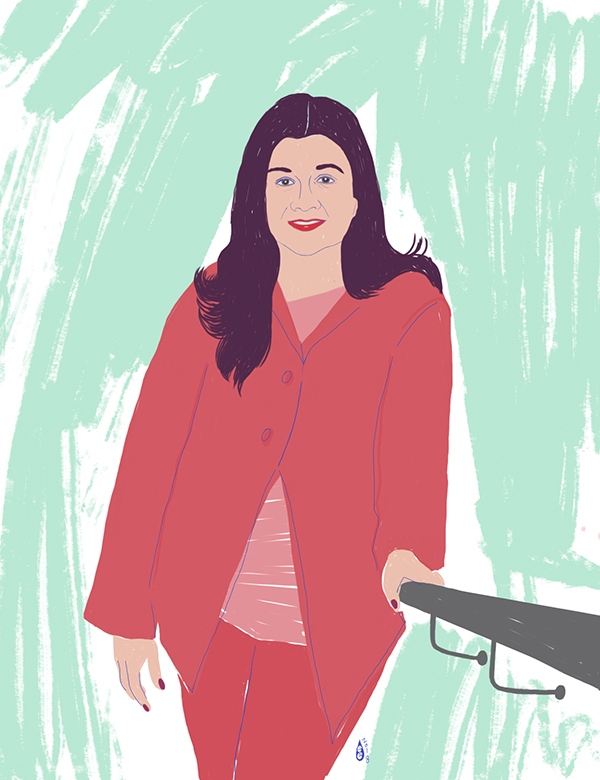 Supporter of the arts, collector and philanthropist Amna Naqvi talks about two commissioned pieces in her collection.

Untitled is an installation that was commissioned from the Hong Kong-based artist Tsang Kin-Wah in 2012. Both my husband Ali and I’d been noticing Kin-Wah’s work in Hong Kong for some time. For me the appeal lay in his use of text as a leitmotif. We were on an Asia Art Archive Collectors Circle trip to Seoul in 2011 and it proved to be the turning point for this acquisition. We visited Leeum museum in Seoul, came upon Kin-Wah’s text on the glass cladding of the museum, and I was mesmerised by the sheer scale of the installation. We both decided that a commissioned work would be best as we would prefer the possibility of an installation rather than a painting. We invited Kin-Wah home for a discussion with Jehan Chu, who helped us with the commission. We came up with the idea of a folding blue and white chinoiserie-inspired screen which would be manifested as a single work of art but with the possibility of transforming it into three separate pieces.

The text was based on discussions between Kin-Wah and our family. As we looked to Singapore, Pakistan and Hong Kong as home and as places which nurtured and nourished us, we decided to speak about what that notion meant to us. So we all spoke about our experiences living and growing up in these countries. I really enjoyed observing the process when the children were speaking to Kin Wah about what the idea of home meant to them. The art work employed notions of heritage, culture, nostalgia and language. Kin-Wah used English, Mandarin and Cantonese to create the text from the discussions, which was transformed into floral motifs that enveloped the screen. This work is special to me for both its form and its process.

The first time I came upon Wilson Shieh’s work was in the exhibition Outside In: Alternative Narratives in Contemporary Art at the University Museum and Art Gallery of The University of Hong Kong in 2009. The exhibition was curated by Tina Pang and organised in conjunction with the conference Rethinking Visual Narratives from Asia: Intercultural and Comparative Perspectives, and the museum was showing the works of six contemporary artists from Asia. The museum had approached us to borrow works by Imran Qureshi and Aisha Khalid from our collection, artists from Pakistan who are trained in historic Indo-Persian miniature painting; I am drawn to their work as they employ centuries-old traditional techniques to create works that are rooted in contemporary culture. I noticed Wilson Sheih’s work at the opening of the exhibition, as he was playing with the same notion, and connecting history with now. He was using the Gongbi Jehan Chu also helped with this commission in 2015. Both Bruce Lee and Muhammad Ali had lived large in the imaginations of people growing up in the 1970s. They were both universal figures who were loved and venerated globally, be it Los Angeles, London, Lahore or Lagos. Therefore we asked Wilson to use their portraits and combine them with IM Pei’s Bank of China Tower for Lee and the IFC II for Muhammad Ali. The work combined images of Hong Kong’s iconic skyline with two giants of our generation.