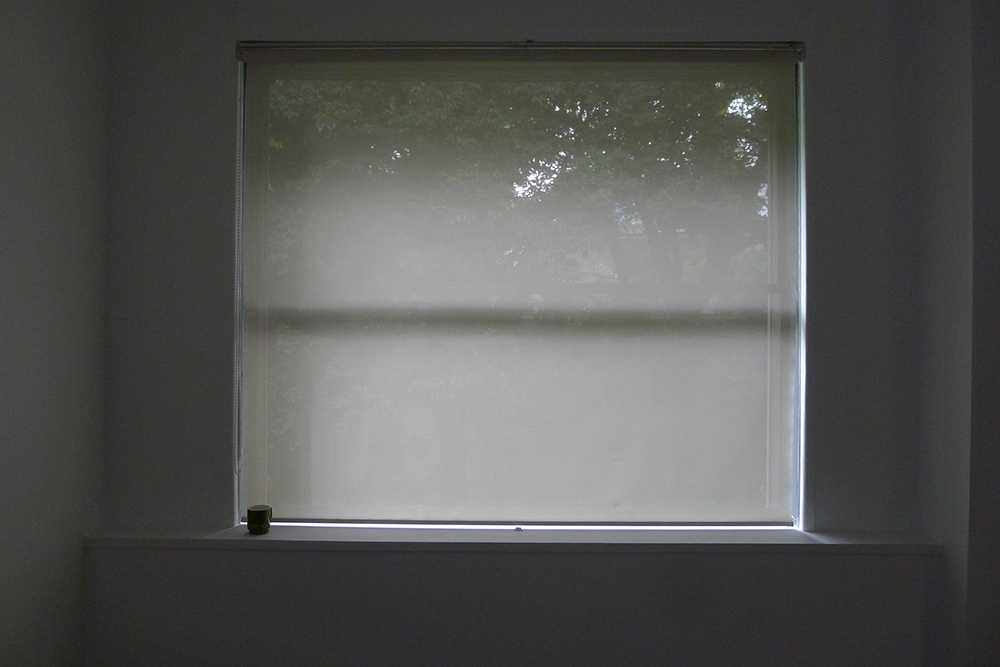 Lee Kit’s exhibition occupies, as a single installation, the entire Hara Museum of Contemporary Art, an adapted modernist 1930s former residential building surrounded on two sides by a Japanese garden with an open lawn at the rear. Selections from the museum’s permanent contemporary sculpture collection are shown outside, and permanent installations are also displayed within the museum. It is necessary to appreciate the architecture, the architectural detailing – particularly the windows – and the other art and areas of the museum, including the shop and cafe, to fully appreciate Lee’s exhibition.

Rather than ignoring or competing with the museum’s architecture and its installed art, Lee actively embraces the museum, and both strategically and subtly places his own paintings, videos and installations within it. Lee’s entire installation beckons to be quietly looked at, but it also works if viewers quickly pace through the galleries, ideally accompanied by their own (loud) ear-plugged music, passing through the museum’s natural light, shadows and reflections layered by Lee’s added contributions, then going outside and back in again. Lee would probably approve; his work is open to all sorts of interpretation and he often uses and is inspired by music.

Lee has made two intentional alterations to the museum’s internal architecture. They will be invisible to most viewers, but they show the artist’s commitment to getting his installation correct. The major change is on the ground floor, where two pillars are covered by adding a wall to create two separate rooms with a low opening between them, making visitors duck slightly to pass between them. Lee says he did this because the two pillars “were very impressive for me. Which meant I didn’t know how to use them.” In this gallery there is also an annex with a wonderfully curved window – original, from when the building was residential – looking out onto the garden. On the windowsill halfway along is a nonchalantly but ever so precisely placed brown bedside radio alarm clock of a style popular in the 1980s. Standing near the clock gives dual views: into the garden and into the gallery. The eye catches both the garden and a video projection on a far wall of a woman’s legs, in which her feet twist, writhe and rub together. The text added to the video (“Deep inside you never let go. Deep inside you never let this go”) could be either connected to or entirely disconnected from the images. Acknowledging this, Lee says: “I was thinking, maybe this is too much because it provides too much emotion to the video. But then I thought, no, emotion is like a frame to the video, to prevent people from over-interpreting it. I don’t want people to look at the video and think, ‘Oh, this is so relaxing’. Yes, it probably is, but I am not talking about being relaxed, so I added these two sentences. But these sentences repeat too obviously, so I added two more. So sometimes I add lyrics or phrases which function like frames.”

On the museum’s floors are all the projectors he uses, which are themselves sitting on top of or beside plastic storage boxes, each positioned as obstacles not to be tripped over or as just aesthetic forms. Video images are beamed onto walls and pure white light at times shines through these boxes. For example, at a right angle to the feet video is an intermittently projected light coming from the floor onto the wall and across and through the low opening into the next room. As they walk past or pass into the room, visitors are briefly fully lit. Caught in this light, the audience and their shadows intentionally add layers that complement the interior architecture and Lee’s own installation. This shadowing effect is repeated in other sections of the museum and layers the entire exhibition. Says Lee: “The layer is somehow also invisible because when people start to move, all compositions will change. This is something I cannot control.” The audiencecomes and goes randomly through the museum; they are projected, making the entire exhibition intentionally dynamic, with people spotlit, shadows projected.

Lee replicates the museum’s windows as video projections on white walls, often adjacent to the real windows. Both have their blinds drawn. Enigmatically, the text near one replica window says, in part: “Everything is fragmented, but not broken. It’s beautiful.”

There are magic tricks too, openly presented for the audience to spot. A painting of a hand with the index finger pointing downwards is replicated in a video in another room. If a viewer watches this video long enough, a figure appears and walks towards the “painting” to adjust its position. Elsewhere, a green coffee mug on an upstairs windowsill has the words “Full of joy” printed on it. A nearby video includes the words, “But my arm is not long enough to reach the cup”. The cup, however, is available for sale in the museum shop. Also, one of Lee Kit’s archetypal painted cloths is pinned to a wall, and at frequent intervals a small child in a bright red T-shirt appears projected on the cloth; the text below simply says “hello”. Finally, the real blinds covering the real windows are made from a gauze-like fabric, and in places this same gauze is projected, giving some paintings and some walls a shadowy, gauze-like appearance.

The exhibition is a swirl of text, painting, light, shadow, architecture and glimpses of the outdoor gardens. The audience is an unconscious participant, and the initial crucial welcome, the child’s “hello”, sets the exhibition’s friendly, embracing tone. The audience were intrigued, possibly mesmerised in some cases, and fascinated by the exhibition’s touching, enigmatic layers of installation and possible meaning. It will be fondly remembered.