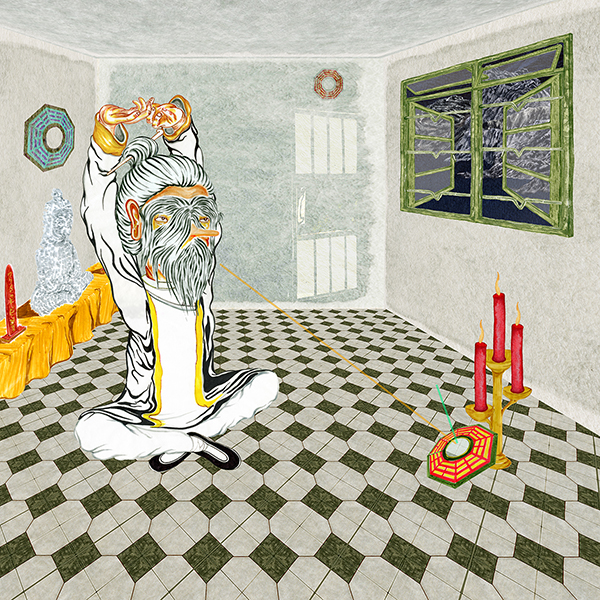 As the martial-arts fiction community mourns the recent death of well-known wuxia novelist Jin Yong (1924-2018), it is refreshing to see his characters and stories live on in the works of Vancouver-based artist Howie Tsui. The artist grew up consuming endless hours of old Hong Kong martial-arts movies, including video adaptations of Jin Yong’s books. In retrospect the artist has realised that they were a lifeline to his cultural roots in his birthplace, and still provide a rich source of inspiration.

Tsui’s first solo show at Art Labor in Shanghai follows on the heels of his exhibition opening at Ocat Museum of Contemporary Art, Xi’an. The Xi’an exhibition showcases his giant, 20-metre-long, scroll-like video installation Retainers of Anarchy, originally commissioned by the Vancouver Art Gallery. Set in the fabled and now demolished Kowloon Walled City, it depicts in minute detail the lives of ordinary residents and martial-arts practitioners in the self-ruled community.

The show at Art Labor draws heavily on the extensive research for Retainers of Anarchy, and is a continuation of it. The main challenge Tsui set for himself for the current show was to incorporate the idea of seriality and sequential imagery employing a set of new media. The result is a body of innovative work that brings to life the action-packed world of wuxia fantasy fiction, including original ink drawings, a video, a lightbox, several lenticular lightboxes and digital prints.

The focus of the Shanghai show is squarely on the practitioners of martial arts, as seen in the new video Parallax Chambers (all works 2018). In fact, they are all derived from one particular school of martial arts inspired by Jin Yong’s popular series Legend of the Condor Heroes. Tsui feels regional identity and distinctiveness are culturally enriching, and so to combat the homogeneity driven by globalisation that he sees engulfing our planet, he plans to introduce a different kind of martial-arts school into each of his next projects. Technically the video relies on an algorithmic animation sequence that uses the same highly labour-intensive process as Retainers of Anarchy, requiring numerous richly detailed original drawings that are then animated, converted using a computer program and finally sequenced. The result allows us a peek into the magical world of wuxia characters as they fight or purge themselves from poison, all set in one of the overcrowded chambers typical of the former Kowloon Walled City.

Tsui’s skilful drawings, as in Parallax Chambers (White Camel Mountain No. 1), express a sense of mystery and danger through a host of mythical characters fighting and escaping venomous snakes or ugly, frog-like figures. Details such as the floor tiles are reminiscent of Hong Kong’s vernacular housing.

Lenticular light boxes such as Daisy Chain are successful attempts to translate previously animated work into object form without sacrificing movement or light. The addition of a light box mimics the quality of a projected image. Looking at the image from various angles, we discover five distinct heads, each with unique facial features and hairstyles, such as one of a Shaolin abbess. The medium also works well whether Tsui’s protagonists are situated in bright outdoor or dark indoor settings. For example, the character Yang Guo appears in Winged Assassin, set in a classic Chinese landscape with muted colours, wielding his sword and riding a large bird with flapping wings.

At first glance the lightbox work Parallax Neon (White Camel Mountain), with colourful light coming through the small slits, is reminiscent of Chinese paper-cutting. In fact, Tsui was inspired by a combination of back-lit movie posters from the 80s, neon lights and kung fu posters created by self-taught sign painters, which he observed growing up in Africa.

Tsui keeps the spirit of Hong Kong alive by drawing inspiration from its history, video adaptations of its novels, and its slapstick comedy tradition, as well as its multicultural environment. Hybrid in both his sources of inspiration and his use of media, Tsui lends his work a contemporary spirit while harkening back to an age of martial arts and chivalry. Traditional drawing skills combined with the latest technology create a novel rendition of a mythical, action-packed world.