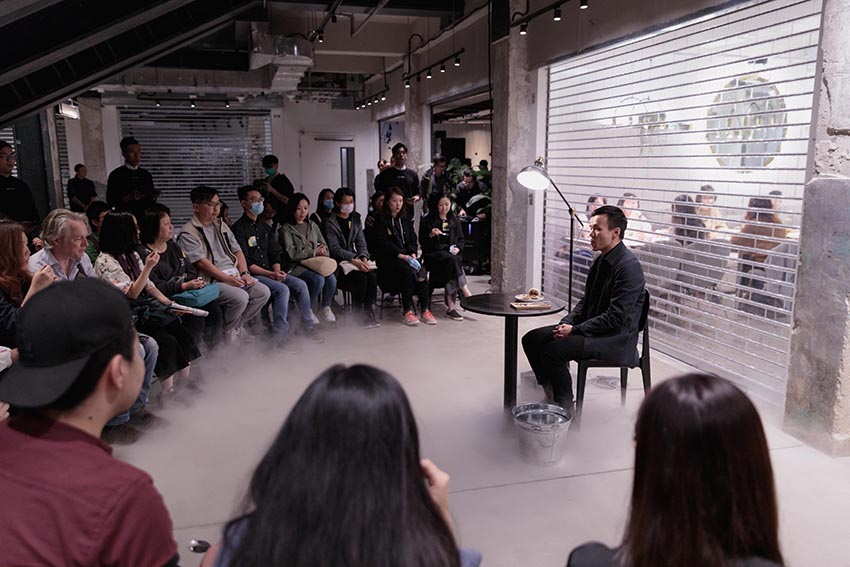 Completed in late 2018, the revitalisation of the three remaining factories of Nan Fung Cotton Mills pays tribute to the industrial past of Hong Kong, once a leader in global yarn production. Jockey Club New Arts Power recently presented a series of installations and 45-minute performances at several locations within this complex of buildings in Tsuen Wan, now a hip attraction known simply as The Mills. For the project, Threading Through Time, participating artists had been asked to respond to The Memory of Herbs, a newly commissioned short story by Chan Wai that chronicles a woman’s career as a textile worker and, implicitly, celebrates Hongkongers’ can-do spirit over half a century.

The three installations that make up Kay Chan’s Literary Walk are straightforward. One of them, situated on bridges connecting two buildings, consists of panels on which excerpts from the short story are displayed, and vintage telephones through whose handsets a recording of such excerpts is played back with background music by Fung Lam. Right beneath these bridges is the space for White Ginger Lily, where Hugh Cho and his all-male TS Crew manipulate long sheets of cloth on and around bamboo scaffolding they have set up – a structure meant to represent a sewing machine. They also perform some parkour movements, but spend much of their time jumping the fabrics twisted into ropes.

Movements are minimalist, however, in the fashion show-inspired Nos mères Leurs mères, which is directed by Ata Wong and takes place in a rooftop park. For most of its duration, seven female members of his Théâtre de la Feuille are stationed in a row and rotate at changing speeds. They are supposed to conjure up turning spools of thread, though their bulbous, fluffy outfits give them a much greater resemblance to marshmallows en brochette.

Chan Wai’s account of a factory girl’s struggles is turned into a musical,
also called The Memory of Herbs, by Olivia Yan and her O Theatre Workshop, whose conventional, soap-opera treatment of the material is redeemed by Olga Chung’s engaging performance as the strong, self-reliant protagonist. The production is staged in a small, screened-off part of a commodious atrium, and audience members are required to wear headphones throughout; it is as if the environment of the former factory were inimical to a grasp of the vicissitudes of a workers’ life.

This is in stark contrast to Living Up to HER, the only truly site-specific performance here. The audience is led by actor Chester Wong on a tour of a few shops near the staircase in the atrium, where they get to sip brews of coffee, eat a slice of tiramisu and see a garment-recycling facility. All these sights, smells and tastes evoke in his monologue, written by Santayana Li, memories of a departed grandmother. The literally bittersweet, ritual-like experience, directed by Ivanhoe Lam alongside the actor himself, is further enhanced by Sabrina Wong’s dancing and a male choir’s unaccompanied singing, both fittingly contemplative in character.