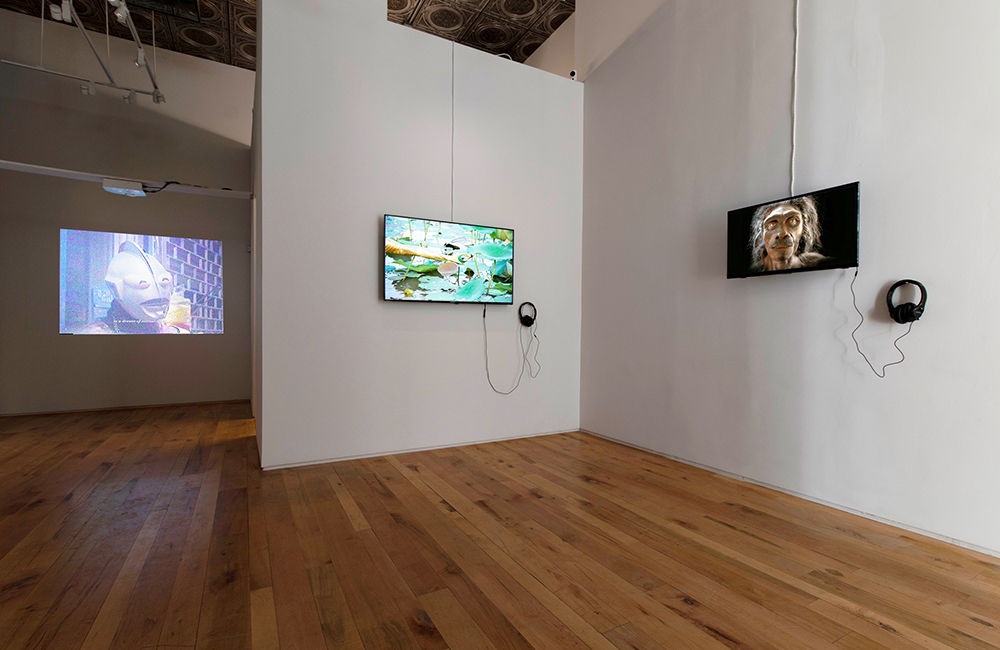 Even before the pandemic struck, the dystopian visions and reimagined histories presented in Hong Kong – Tales of the City felt extremely relevant and timely. Media works from nine artists belonging to Hong Kong’s oldest video collective address a range of vital issues, from civic engagement to the impact of globalisation on contemporary urban life. The collaboration between Videotage and Denny Dimin Gallery opened in New York just as the city headed into lockdown. As part the ongoing effort to prevent the further spread of Covid-19, the gallery’s temporary closure meant that the group exhibition could only be viewed online. Instead of moving through rooms with monitors and headsets, one simply had to scroll down the page to navigate the three parts devised by curator Isaac Leung. With most run times clocking in at 10 minutes or under, the videos could comfortably be watched in one sitting.

The first section, Publicness, introduced the notion of a collective consciousness through the lens of historical events. Using government-produced archival footage from the 1960s, Ellen Pau explored cultural nostalgia and political memory in Diversion (1990). The grainy, sepia-colored panoramas of Victoria Harbour and images of swimming competition participants diving into the water highlight the inconsistency between an idealised version of Hong Kong and the particular moment in which her video originally debuted – a year after the Tiananmen Square protests. For Pau, who was born in 1961, the decade represents a period of transformation for “colonial Hong Kong”, from fishing village to metropolitan city. Millennial artist Lee Kai Chung revisits the era’s turmoil in The History of Riots (The DJ) (2013) by memorialising Lam Bun, a radio commentator who was killed during the 1967 riots. In the black-and-white re-enactment, a man wearing wool suit repeatedly sits down in front of a microphone, occasionally opening his mouth as if to speak, though only high-pitched feedback can be heard. Meanwhile, Chloë Cheuk documents the aftermath of the 2014 Umbrella Movement in Waiting For Another Round (2015). The four-channel video shows cars driving past a traffic barrier, on which the words “occupy” and “demand” have been graffitied but are already beginning to fade. A soundtrack of street noise further emphasises the dissonance of a city returning to business as usual. But as all three works reveal, far from being apolitical, Hong Kong bears a complicated legacy of protest and resistance.

Next, Everydayness featured works that closely examine the seemingly ordinary backdrops of daily life. In The Doors (2008), Chilai Howard manipulated surveillance camera recordings of a residential block in Nam Shan Estate, Shek Kip Mei – typical of the public housing that proliferates across Hong Kong – to amplify the patterns and rhythms of apartment doors being opened and closed throughout the day. Doors and windows also serve as prominent motifs in Door Games Window Frames: Near Drama (2012) by Linda Lai Chiu-han, who spliced together 500 movie clips from 11 different 1960s Cantonese melodramas and thrillers. Re-edited to play simultaneously and often repetitively, the scenes draw attention to the gendered performances taking place in domestic settings. Both Howard’s and Lai’s works suggest a blurring of the line between public and private spaces, while João Vasco Paiva’s Action Through Non Action (2009), in which audio interference and video distortions track the artist’s experience of standing in a crowded walkway, illustrates the reality of living in a city as densely populated as Hong Kong.

Veering toward the speculative, the videos in the final section, Queerness, cast their gaze beyond present-day Hong Kong. Perhaps slightly too on-the-nose given the current state of the world, The Euthanasia Project (2019) by Australian architect and artist Chen Pin Tao mimics the format of a crowdfunding video to propose a “techno-utopia” where human beings can opt to live entirely in a virtual world, while their bodies are kept alive in prefabricated capsules. As an androgynous gold figure wading through a lotus pond with offerings of canned beer, Guangdong-born Ip Wai Lung took a more meditative approachin his performance Qingdao Lotus Pond (2018), which he filmed while at a residency in Cambodia. Joseph Chen similarly blends spirituality with dream-like visions in his travelogues Chungking Detour and Siam Rehab, both part of Sleeptripping Dualogy (2018–19), which weave together found materials from an array of sources – including Wong Kar-wai’s Chungking Express (1994), animated films such as Hayao Miyazaki’s Spirited Away (2001) and Runnan Fang’s Birth of Monkey King, Journey to the West (1999), an interview with Bruce Lee, and audio files of an airline pre-flight safety speech and water dripping from a tap. The result, both frenzied and melancholic, seems to reflect our overstimulated yet increasingly isolated consciousness.

At a time when a global crisis continues to expose troubling truths, Hong Kong – Tales of the City mirrors many of those universal concerns. “To me these are not just tales of Hong Kong; these are tales of everyone,” Ip says in a video posted on the gallery’s Instagram account. For viewers stuck at home, desperate for distraction, the virtual exhibition provided a perfect diversion, responding to the need to confront what is happening in the world around us and our desire to escape it.