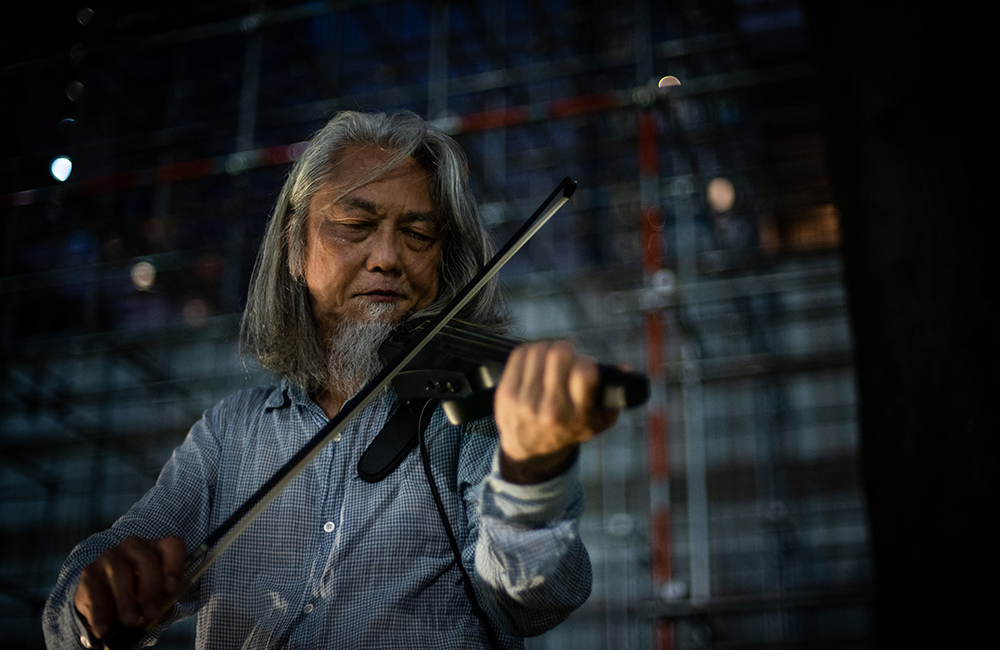 The first part of Kung Chi Shing’s haunting video City Inside a Broken Sky, Deep Night alternates black-and-white imagery of a construction site amid debris and scaffolding, the colonial-era building of the Oil Street Art Space, and a young boy. Familiar construction noises are interspersed with occasional wailing, an eerie, melancholic sound conveying despair. “Dark in every sense,” in the artist’s own words, the video is the first of four in a series called Soundscape, a meditation on the implications of construction, the use of public space and the city itself.

“Construction involves destruction,” he says. “When you destroy something, you’re erasing something that came before it, and Hong Kong is famous for erasing. Every few months an old building is gone, an old space is destroyed to build a new one.”

Soundscape was created to mark Oil Street Art Space’s expansion. With two galleries housed in a complex of historical significance, its expansion will include an indoor gallery, and an outdoor venue that will be open to the public. The space has served over the years as a yacht club during the colonial era, a monuments and antiques storage facility, and a studio space for young artists.

Using this history as a point of departure to understand the site and city today, Ivy Lin, curator of Oil Street Art Space, says the aim of the expansion is to reinvigorate audience engagement with public space by exploring ideas of sustainability, community and sharing public resources. “We would like to engage people to think about what we will be – and how they can be involved in the future space. This is why we invited Kung Chi Shing; he’s very good at creating an intimate response to the environment.”

Originally Soundscape was supposed to be a live performance conducted at sunset, in both the construction site and the courtyard in front of Oi!, with members of the audience watching from the footbridge above, resulting in a much more immersive experience. Kung had to reimagine a pandemic-friendly version, resulting in the four-part video installation.

Known for his live experimental music performed during “street concerts”, Kung traversed new creative ground with Soundscape while holding firm the core concept of his practice – examining how environments, especially public spaces, are altered by music and art.

“I don’t think music should invade a place” says the artist. “It should integrate with the environment to generate something different.” He achieves this effect by extracting everyday sounds we experience in our surroundings and combining them with his experimental creations.

Kung’s street concerts began in 2009, the same time as his interest in public space was piqued, after the controversy surrounding the public area in front of Times Square. Attempted privatisation of public space and its designated use became a focal point for the artist. He was later approached by Hong Kong Arts Centre and used the space outside it to make a statement that public space shouldn’t be used for commercial purposes. He additionally organised casual street concerts in older areas of Hong Kong, such as outside the Blue House in Wan Chai, using “primitive equipment”. In staging these intimate shows, his infusion of music into their neighbourhoods brought people together in a way that broke the monotony of their daily lives.

“It was meant to stimulate your sense beyond what you see every day,” Kung recalls. “People today are so robotic; their life is a constant routine. It’s all calculated, with a small variation of ups and downs. It’s that order that I find frustrating. I don’t want to shock people for the sake of shocking them; I want to slap them in the face and wake them up a little. Especially in Hong Kong where we’re so conservative.”

His experimental sound reached new heights in his collaborations with Peter Suart, who formed a group called The Box. It was during one of their shows that Lin first encountered Kung’s music, and recognised his practice as an artistic one.

“It’s almost making sound rather than music. From that point of view it’s close to artistic creation: musicians responding to their environment and daily issues the same way that a lot of contemporary artists do.”

Ultimately Kung’s response to his environment, specifically in City Inside a Broken Sky, is unexpected for audiences, which he likens to creating a “sense of displacement”.

“Displacement is a very powerful expression. When you put things in a place where it’s not supposed to occur, that can be very powerful. It inspires you to see it in a different light.”

The impact of the hybrid soundtrack along with the dark imagery is a discomfiting one, but also one that resonates with the current climate of uncertainty, mirroring viewers’ changed relationships with and associations of public space.