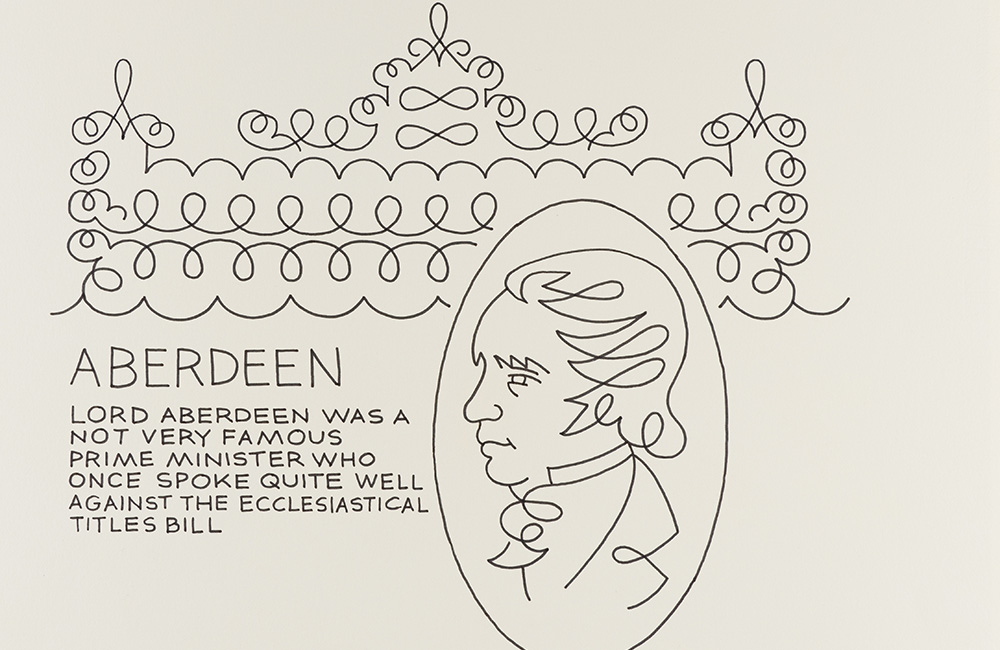 Arthur Hacker left London in 1967 for a job as an art director in the colonial Hong Kong Government’s Information Services Department. Among his luggage would have been the air of London’s cultural whirl, glimpsed in the ambience of movies of the time: Michelangelo Antonioni’s Blowup; revolutionary youth against the whole (damn) system in Lindsay Anderson’s If… ; and the violence and Stalinist social conditioning in Stanley Kubrick’s A Clockwork Orange. Hacker brought his tight modernist graphic skills with him, complemented by the era’s psychedelia and surreal humour. His artist’s eye was broadened by the satire and profanity of Oz magazine; the bright animation of The Beatles’ Yellow Submarine; the era’s counterculture and rock music; its fashion, book, magazine and record cover design; and the ground-breaking pop art of his British contemporaries Peter Blake and Richard Hamilton. These progressive influences and an openness to depictions of life’s oddities would form a key source for Hacker’s curlicue graphical drawings.

Hacker came to Hong Kong with a liberal, individual outlook on life and over the years he never really changed, despite in later years playing up the role of a plummy English colonial caricature – as when, at the time of the 1997 return of Hong Kong to China, he appeared on a magazine cover in military dress-uniform with a pith helmet, an impression of him that persisted for years as it hung in Hong Kong’s Foreign Correspondents’ Club.

Hacker hadn’t arrived from a vibrant city to a stagnant backwater (that offensive and inaccurate label of Hong Kong as a “cultural desert”). In the 1960s and early 70s, Hong Kong was a diplomatic and military outpost strategically located next to the Guangdong border. It was a place of foreign “China watchers” and spies, and an R&R destination for soldiers stationed in or the press covering the Vietnam War. The city’s neon-lit vibrancy was led by its young workforce and a dynamic laissez-faire economy that soon made Hong Kong the world’s largest manufacturer of textiles; an important base for the sourcing, design and production of clothing; a major producer of toys and other plastic products; and one of the world’s biggest industrial printing locations for books, magazines and print products. Epitomised by its quickly produced films, Hong Kong had emerging design and creative communities, albeit often low-cost and pragmatic, as well as promising independent artists, predominantly in what was identified as the New Ink Painting movement.

Hacker arrived at a pivotal moment to work in the city: just after the 1967 riots. Violent social unrest fuelled by the Cultural Revolution spilled into Hong Kong from mainland China as a reaction against the city’s exploitative work conditions, few educational opportunities, poor housing and minimal social services. The colonial Hong Kong Government’s approach to governance, economic and social policies, and administration radically changed after the riots, and experts with outreach and communication skills were put to work.

The influx of immigrants into Hong Kong from the mainland in those post-war years was unrelenting, and Hong Kong’s Public Works Department and its architectural staff were tasked with quickly housing people. Hong Kong’s urban transformation was made possible by pragmatic modernist architectural design practices, perfect for quick construction using steel-supported concrete. This is seen in the exemplary City Hall precinct, the former Central Government Offices and the new schools, hospitals, health centres and housing estates. Hacker was not a lone outsider bringing new design ideas to Hong Kong, but joined an already established ethos of like-minded, young, creative professionals looking for solutions to problems, which included good modern design, and the creative use – reflecting the era – of innovative, often wacky and humourous marketing.

Hacker’s designs in government publicity campaigns and publications were eclectic. His poster design, now in the M+ museum collection, for a Teddy Robin and the Playboys concert at “the new Blake Pier roof garden” in April 1968 was pure hippie flower-power swirling psychedelia. However, it was Hacker’s skills of modernist design with clean graphic lines and logical layout that got him a job in Hong Kong, as previously seen in his record cover design for the 1962 UK pressing of French singer Juliette Gréco’s album Showcase. Immediately after he arrived, Hacker’s designs for the Festival of Hong Kong, including the annual commemorative books, and his many government information posters predominantly followed this clean design approach.

Hong Kong was perfect for Hacker, allowing individuality and mild eccentricity. As a public servant he had a secure government job, a salary and time to travel. He settled into Hong Kong’s rhythms: sometimes expatriate, sometimes Chinese, often in between; and frequented nightlife areas such as Wan Chai and Tsim Sha Tsui. As a keen social observer, he recognised the unique amalgam of Chinese cultures (Hakka, Tanka, immigrants from Fujian and Shanghai, for example) and keenly noted their intersection with British mores and colonial systems of administration embedded in the physical and social fabric of Hong Kong life. As an artist, he appreciated the city’s visual contradictions and tics, its physical expressions of colonial power and the raw energy of Chinese endeavour. He became a voracious collector of books, and mixed the city’s colonial anecdotes with Chinese stories and myths.

Hacker’s Hong Kong is probably the height of his artistic achievements.
It is a distinctively personal series of drawings, different in intention from his formal government work, capturing aspects of Hong Kong, most often depicting the intersection of colonial British/European and Hong Kong Chinese life. It is a beautifully printed book with a simple rationale: a witty look at Hong Kong, comprising individual line pen drawings that incorporate Hacker’s own curlicue illustration style of flourish, scroll or spiral – the sort of curly strokes used in English calligraphy, Arabesque decoration or wrought-iron garden gates. Another design element he adopted in his illustrations was an intriguing “basket-weave”, a type of thick crosshatch that gave highlighted detailing to a drawing, as seen in the shapely jeans worn by a city girl visiting Lok Ma Chau or the ‘sail’ of the plough in his drawing and description of Yuen Long, two of his many Places of Hong Kong illustrations.

The Hacker’s Hong Kong drawings established a template. Hacker was intrigued by the city’s visual contrasts and contradictions: the old woman street cleaner wearing a Hakka hat and apron alongside a young woman sporting a miniskirt and ruffled summer brim hat. It is a classic juxtaposition of Hong Kong’s rich and poor/young and old/sartorial chic alongside Hello Kitty cuteness, scenes still seen on the city’s streets. Hacker is one of a long history of artists, photographers and filmmakers who captured the city’s pace and ironies, translating them as satire or humour on film, as a photograph or cartoon, illustration or advertising campaign.

Over time, and especially after his retirement from government employment, Hacker’s freelance activities expanded, and he became variously an artist, designer, art director, cartoonist, illustrator, historian, collector and sometime dealer, buying and selling colonial (usually British-in-Asia) objects, especially postcards and photographs. Increasingly, Hacker became a chronicler of Hong Kong’s history and of the colonial treaty ports, particularly Shanghai, along the China coast, as well as the country’s inland rivers. He was employed to write historical anecdotes and oddities for magazines, corporate clients and historical societies – this work increasingly occupied his interest and time, overtaking his pure artistic work. This research, however, was skilfully repurposed for his own occasional self-publications, explaining Hong Kong and its history with simple text and drawings, for example:

This sparse, inconsequential fact is illustrated by a simple line drawing of a European gentleman (presumably Aberdeen himself), with a curlicue flourish in the hair and the high-necked ruffle of his shirt. The text and portrait are unremarkable but taking a prominent background position is a frilly depiction of what looks like a cake; closer identification reveals, of course, a superbly rendered curlicued Jumbo, the iconic floating restaurant in Aberdeen Harbour. The three almost unlinked elements of vague historical portrait, obscure text and a contemporary folly, a floating restaurant, work because Hacker is tapping into his audience’s sense of the absurd. It is in a satirical tradition, which he acknowledges in the title of the The Hong Kong Bargirls’ Progress, using the famous English painter and social satirist William Hogarth’s “progress” to make a witty observation about changing styles in Hong Kong bars.

Hacker’s spirit lingers still at Hong Kong’s FCC. He would arrive every Friday afternoon to sit in his favourite position at the counter of the Main Bar. He would then move his stool a strategic few centimetres this way or that to align his view with a pillar, so he didn’t see the odious trash that might be broadcast on the bar’s corner television (or, as he would say, with an especially elongated vowel, “the telly”). Ensconced at the bar, he would not move, and would enjoy the camaraderie and banter, and witness and participate in the laughs, fights and arguments as Hong Kong journalists and various fly-ins and hangers-on would gather at the journalists’ end of bar (in opposition – often actual – to the lawyer’s end of the bar) to review the week. He infamously memorialised the bar’s commotion and revelry in his Zoo Night cartoons, published in the FCC’s The Correspondent magazine.

Placed in another corner of the bar is the original maquette of Hacker’s best-known creation, the dragon-like anti-litter rogue Lap Sap Chung. Dividing the Main Bar from a smaller slightly quieter room known as The Bunker is the FCC logo he designed, in full heraldic curlicue flourish, etched on glass. And imposing in its polished brass importance at the FCC front door is the plaque featuring Hacker’s prominent logo, commemorating the opening 40 years ago of the FCC’s premises in the former ice-house storage rooms of the Dairy Farm building on Lower Albert Road, opened by the Governor Sir Edward Youde, whose residence was Government House on Upper Albert Road. It is just one of many historical facts about Hong Kong that Arthur Hacker embellished in his own witty words and unique hand.