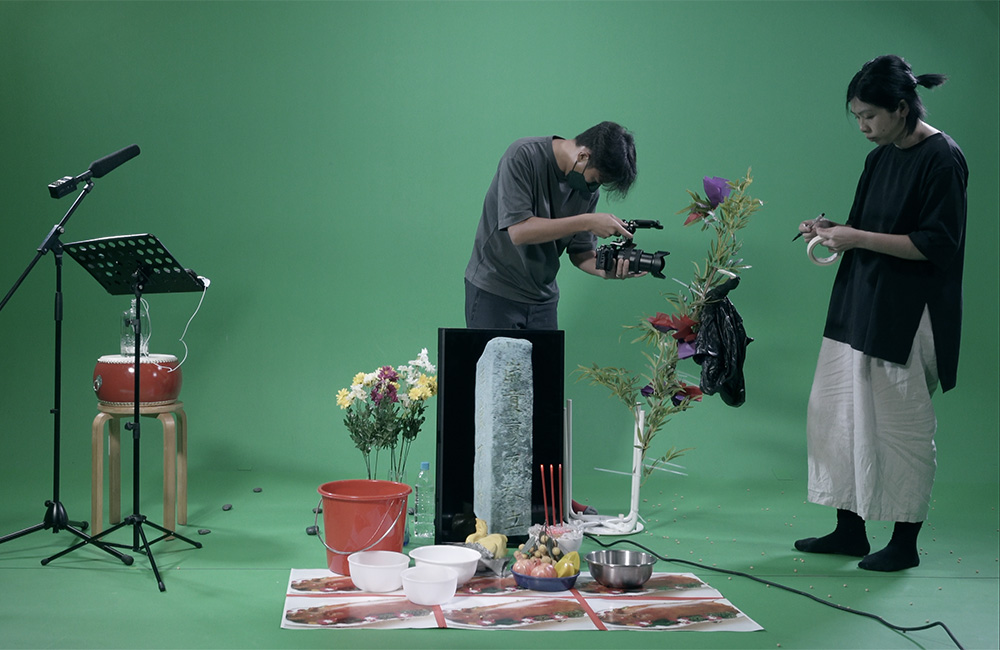 There Is No One Singing on the River relates Law Yuk Mui’s experience and fieldwork along the Ng Tung River, located in Hong Kong’s northeastern New Territories. The river drains a large area and flows down on the western slope of Wong Leng, going underground in some parts of its lower course, irrigating Lau Shui Heung and Hok Tau reservoirs. Since the 1990s, its natural landscape has been radically modified due to flood control projects. Its catchment is very wide and its trajectory difficult to map out. Furthermore, the river has many names, changing as it meets various branches and tributaries. It even used to be called the Indus River, thanks to South Asian surveyors during the colonial period.

Rather than trying to grasp this elusive, complex reality, Law reflects on her working methodology and proposes a very open interpretation of her journey. Based on her investigation, sound recording and mapping of the river, the exhibition includes her recording equipment, compass, artefacts and drone survey, as well as a fictional video. The artist wishes to trigger the imagination of the visitors, inviting them to extend her experience through their own memories or projections of the idea of a river.

Law likes using field recording as a method of understanding a place. This time, her starting point was a 24-hour field recording she did in 2013, inspired by the World Soundscape Project by Canadian composer by R Murray Schafer. At that time, she installed her recording device on the rooftop of a village house near Hung Leng Tsuen and recorded the local sounds, including the rumble of thunder caused by an unexpected typhoon. Eight years later, on the same date, she installed her equipment nearby, focusing this time on the flow of the river captured from the entrance of the drainage tunnel. More sounds were taken from the riverbed, in particular where branches merged, and from the typical combination of urban and rural environment. She used bottles of water during her underwater recordings, playing with echo and reverberation.

In the gallery, visitors are given a headset that plays the artist’s recordings. The low ceiling space and its brick pillars easily transport the mind into an underground waterway. Light is scarce and Law has chosen to avoid the usual gallery spotlights, using neon lights instead. She has transformed them into curved sculptures that represent the meandering of the river, scattered across the space. The recorded sound changes according to the various installations and connects them. In the middle of the gallery, a ladder represents the entrance of the drainage tunnel, where she fixed her recording equipment. Metaphorically, it invites the audience to climb up or down into her conception of Hong Kong geography.

Although the sounds are obviously very realistic, none of the installations pretends to recreate the existing landscape. On the contrary, Law not only exhibits her material but also lays bare the wires and technical elements involved, as if she wanted to deconstruct the outcome of her fieldwork herself. River Atlas (2021), for instance, consists of four large screens displaying drone-captured images of the river from dawn to dusk. One of the screens is installed directly on the floor and, on the top of it, Law placed some glass water bottles connected by wires. The same bottles, this time full of concrete, can be found under her tripod, holding the iPad that displays her video River Ensemble (2021) and her compass. All these technical elements compose her imaginary, fragmented landscape. Above all, they reflect our current connection with nature and understanding of geography, constantly mediated by devices.

Focusing on the local interactions with the river, the two-channel video Rainmaking (2021) brings us further into this atmosphere of artificiality. Law found out that during the summer of 1963, which featured a severe drought, hundreds of villagers climbed up the Wa Shan mountain and prayed for rain along the Ng Tung River. The ritual was described differently according to the sources, but it involved making sound with dried beans, chanting mantras and offering flowers, roasted pigs and fruits. A stone was placed there as a memorial. In the video, Law re-enacts the ritual against a green plain background, as if on a TV show. The cameraman is seen turning around her as she pours soy beans inside a metal ball or hits a drum to call for rain (the artist also made drawings of the different stages of the ritual, including her recipes, which are given to the audience). The 3D image of the stone is projected on the side and looks surrealistic. All these gestures seem meaningless and disconnected from reality. Ultimately, Law’s river appears rootless and lost.